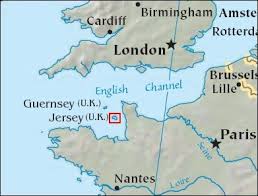 Jersey is the largest of the Channel Islands, between England and France. A self-governing dependency of the United Kingdom, with a mix of British and French cultures, it’s known for its beaches, cliffside walking trails, inland valleys and historic castles.

TWO banks have transferred their funds out of the Island’s banking sector and are handing back their licences.

HSBC Bank Middle East has moved its headquarters from Jersey to Dubai, and ABN Amro Bank, which is majority-owned by the Dutch government, is consolidating in preparation for a return to private ownership.

The news has emerged in the latest quarterly statistics for the Island’s financial services sector to the end of June, which shows a £20.6 billion fall in total banking deposits over the second quarter of the year, from £128.4bn to £107.8bn.

The chief executive officer of HSBC in the Channel Islands and Isle of Man, Ewan Stirling, said that the move of HSBC Bank Middle East to Dubai was ‘not surprising’.

This entry was posted by admin on November 3, 2016 at 2:34 am, and is filed under EVIDENCE. Follow any responses to this post through RSS 2.0. Both comments and pings are currently closed.