« THE FINAL CURTAIN IS ABOUT TO FALL AS US GOVERNMENT ADMITS FINDING “TOP SECRET” INFORMATION IN HILLARY CLINTON EMAILS
SWISS SAY $4B HAS BEEN STOLEN FROM MALAYSIAN STATE OWNED COMPANIES BY GOVERMENT OFFICIALS, UAE OFFICIALS »

In photos released by the Italian Police, Giuseppe Crea, left, and Giuseppe Ferraro are seen after they were arrested. Italian police discovered an underground bunker in the countryside of southern Calabria Friday with the two mobsters, considered among Italy’s most dangerous fugitives, holed up and sleeping inside. 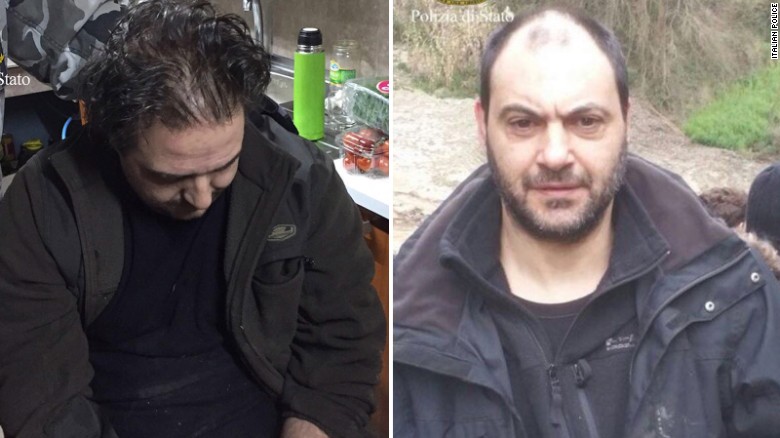 Giuseppe Ferraro, 47, and Giuseppe Crea, 37, both high-ranking members of the powerful and immensely wealthy ‘Ndrangheta organised crime group, are both on Italy’s most dangerous fugitives list. Ferraro, found guilty in absentia of a string of brutal murders and described as “extremely dangerous” by police, had been on the run for 18 years. Crea, wanted for mafia association and extortion, disappeared 10 years ago. Ferraro’s clan is also believed to have been involved in the gunning down of rival boss Domenico Bonarrigo in a turf war. Bonarrigo’s men took their revenge by feeding the suspected gunman, Ferraro ally Francesco Raccosta, alive to pigs in 2013. “They were living in a concrete bunker hidden by dense bushes and trees,” said prosecutor Federico Cafiero De Raho, describing the hideout in the mountains near the town of Maropati in the Reggio Calabria region of southern Italy. Maropati was founded in the 10th century after being used as a hideout by people fleeing Saracen pirates on the coast. 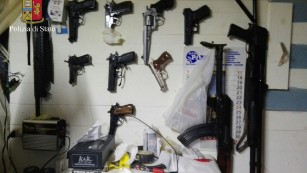 ABOVE – WEAPONS FOUND IN BUNKER

After eluding capture for years, two Mafia bosses have been arrested in an underground bunker in southern Italy.

Ferraro was found guilty of murder and Mafia association decades ago, and had been a fugitive since 1998.

Crea was convicted of Mafia association and had been on the run for nine years, according to the news agency.

Their hideout had an array of weapons, including rifles, pistols and machine guns.

“Today is another wonder day for everyone and for the country because justice has won,” Interior Minister Angelino Alfano said after their arrest.

The two men are part of ‘Ndrangheta, a dangerous criminal organization that has tentacles worldwide. The group is based in Calabria, where the two men were arrested.

Two years ago, Italian officials said the group is linked to drug trafficking in South and Central America, Canada and the United States.

The ‘Ndrangheta was formed in the 1860s, and is involved in kidnappings, corruption, drug trafficking, gambling and murders, according to the FBI.

It has between 100-200 members in the United States, mostly in New York and Florida.

This entry was posted by admin on January 30, 2016 at 12:54 pm, and is filed under EVIDENCE. Follow any responses to this post through RSS 2.0. Both comments and pings are currently closed.