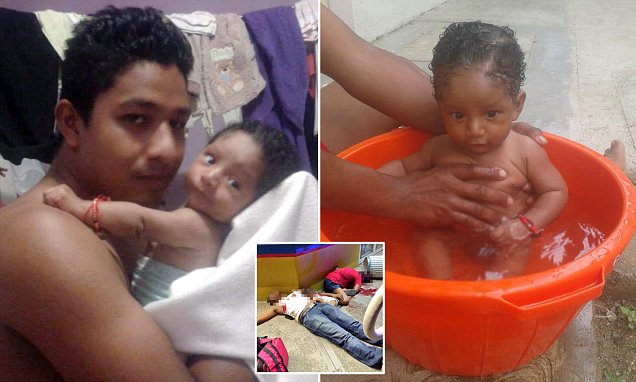 Cuddled in the safety of his father’s arms, bath-time complete, the baby clings on tightly – the perfect picture of an adoring papa with his newborn son.

But the picture takes on a darker significance now, for it would be in these arms that this child would die just seven months later – a moment captured in another, horrifying image.

For this is Miguel Pano, the baby whose violent end at the hands of faceless assassins has shocked Mexico.

Miguel became one of the youngest ever victims of the country’s brutal gangland war, caught up in the assassination of his parents on Mexico’s Pacific Coast on Friday.

Shot dead outside a supermarket, when police arrived just moments afterwards, they would find the tiny child, blood soaking through his baby grow, cradled by his dead father Alberto Pano, 24, killed alongside his wife Alba Colon, 17, at the entrance to Vig’s convenience store on the dangerous outskirts of town.

And there was nothing anyone could do to save them from the wrath of the rival gang in the Oaxaca state town of Pinotepa, just a 90-minute drive from the tourist hotspot of Acapulco.

‘It was over in seconds,’ store cashier Reyna Santos told MailOnline.

‘We’re used to crime and having to watch our backs in this town, but to have such a tragedy on our own doorstep was terrible.’

Tributes have flooded in for the family, with many of Alberto’s friends changing their profile pictures to the image of his murdered infant son overset with the Mexican flag.

One user, Ma De Lourdes Mejia, wrote: ‘I miss you a lot…today we will be lighting a candle for you in the town of El Tamal.’

But Miguel, Alberto and Alba were not the only victims of Friday night’s violence. They died alongside Isidoro Gonzalez, an infamous Acapulco gangster known more widely as ‘El Isis’, wanted by Mexico’s federal government on charges of murder and kidnapping.

It was to El Isis that Alberto was talking moments before his death: just 24, the young man was already known in the area as one of the gangster’s low level drug dealers, brought in to work for him from Acapulco.

‘Alfredo ran a fish taco stand in the street, but was a well-known dealer for El Isis,’ said Abelardo Ribera, a regional crime reporter for the Despertar de la Costa newspaper.

But Alfredo, who is said to have sold marijuana, cocaine, crystal meth and heroin alongside his tasty treats, was small fish to fry.

El Isis was almost certainly the target of the hit: a member of the Acapulco Independent Cartel, he had set up a tortilla shop front called ‘La Princesa’ (The Princess) for a narco-trafficking operation in the town.

And it seems whoever ordered the killing wasn’t intending to give him any chance to escape. The scene was littered with 18 .38 calibre shells, thought to have been shot by three separate assassins, each armed with a six-round revolver.

However, Ribera continued, ‘the fact that another rival gang member could be despatched at the same time will have been a bonus for the killers’ in an area where the gunshots of warring cartels regularly sends people running for their lives.

‘El Isis and his gangsters are all from Acapulco, and they are constantly fighting for territory with the local gang, Holy Cartel (Santa Cartel),’ one local told MailOnline, asking not to be named for fear for his family’s lives.

‘The local people can’t leave their houses after dark because the narcos don’t like seeing people they don’t recognise walking around their territory after dark.’

A hotel owner added: ‘This entire region has been turned into a living hell by the drug wars.
‘We see murders here every week.’

‘The violence never ends,’ acknowledged Abelardo, who averages three murder reports a week covering his beat from the state border to Puerto Escondido.

But the murder of Miguel and his family was particularly shocking, even in a town which has buried so many already.

Demands for justice to be served have flooded social media, where pictures of the little blood-covered boy have been shared thousands of times.

Some have compared him to Alan Kurdi, initially called Aylan Kurdi, the three-year-old Syrian boy whose body washed up on a Turkish beach – another young boy killed because of the decisions of adults intent on making money any way they can.

Police have so far discovered four vehicles –  two cars and two motorbikes, all ridden with bullet holes – at a rival gang’s safe house which are believed to have been used in the drive-by shooting.

As yet, no arrests have been made following the killing, despite countrywide pressure on the local police force after pictures of slain baby Miguel went viral on social media.

‘Hopefully the awareness of our situation that has been raised by this horrible tragedy of an innocent baby will improve things for everyone,’ said the hotel owner.

The municipal police refused to comment when asked by MailOnline.

This entry was posted by admin on February 8, 2016 at 5:57 am, and is filed under EVIDENCE. Follow any responses to this post through RSS 2.0. Both comments and pings are currently closed.