Ukraine plant reactor, scene of worst nuclear accident in history in 1986, covered with airtight structure after years of work.

Reactor No 4 at Chernobyl, the scene of the worst nuclear accident in history, has been enclosed by a vast steel shelter designed to prevent radiation leaks from the site.

The structure covers the reactor and the unstable “sarcophagus”, which was hastily built around it by Soviet authorities in the immediate aftermath of the disaster 30 years ago. The shelter is said to be the largest land-based movable object ever constructed. It took several years to build and cost more than €1.5bn (£1.27bn).

The huge steel arch was moved into place over several weeks, and the completion of this procedure was celebrated with a ceremony at the site on Tuesday, attended by the Ukrainian president, Petro Poroshenko, diplomats and site workers. 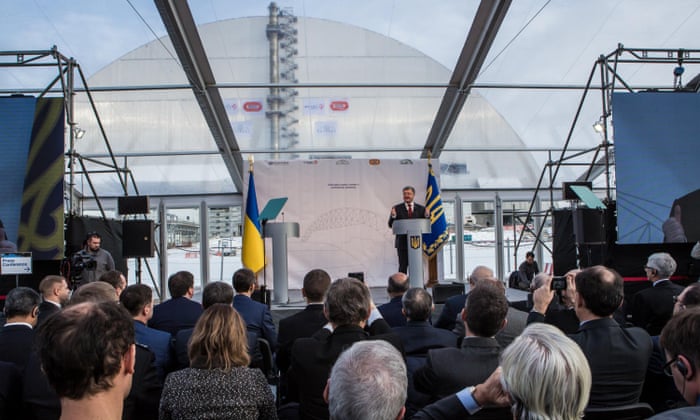 Poroshenko paid tribute to the Chernobyl workers who built the initial sarcophagus, despite dangerous radiation levels at the scene of the disaster.

“It was designed to last for 30 years to protect Kiev, Ukraine and the whole world from nuclear contamination. Thirty years later, we are present here just 100 metres away from reactor No 4 and we can say that this new historical construction has been completed,” he said.

The explosion at Chernobyl’s reactor No 4 occurred during the night shift on 26 April 1986, and news of the disaster was initially covered up by Soviet authorities. About 50 people were killed as a direct result of the accident, but medical estimates suggest up to 4,000 people will die prematurely due to radiation exposure. Thousands more still suffer health effects, and a 20-mile (32km) exclusion zone around the plant remains in place.

Suma Chakrabarti, the president of the European Bank for Reconstruction and Development (EBRD), which coordinated the construction project, said: “The old shelter has now disappeared from our sight, but we’re never going to forget the human toll of the 1986 accident and we owe our thoughts today to the victims of that accident.”

Vince Novak, the EBRD’s director of nuclear safety, said the shelter eliminated a number of fears and risks that had persisted since the accident, including a collapse of the sarcophagus or a fresh nuclear reaction inside the structure, given the tonnes of uranium still present at the site. There was also a danger that radioactive liquids could seep out of the site and into the water supply, because the sarcophagus was not watertight, he said.

“This is the first project of its kind, and I very much hope the last one too,” Novak said.

The shelter is 162 metres (531ft) long and 108m high. The metal used in the construction weighs 3.5 times more than the Eiffel Tower. Construction was complicated by the high radiation levels near the reactor, meaning that in order for workers to be able to spend extended periods of time building the shelter, it had to be assembled several hundred metres away and then slid slowly into place.

Prior to the process, tens of thousands of tonnes of radioactive soil were removed from the construction area and replaced with clean soil. Much of the machinery and engineering equipment used had to be designed and built from scratch, including special cladding and a huge crane system.

Hans Blix, director general of the International Atomic Energy Agency at the time of the accident, who visited Chernobyl shortly after the explosion at the reactor and has been involved in the shelter project, said: “Moving together the two halves of the huge arch of this gigantic shelter is like closing a wound, a nuclear wound that belongs to all of us.” 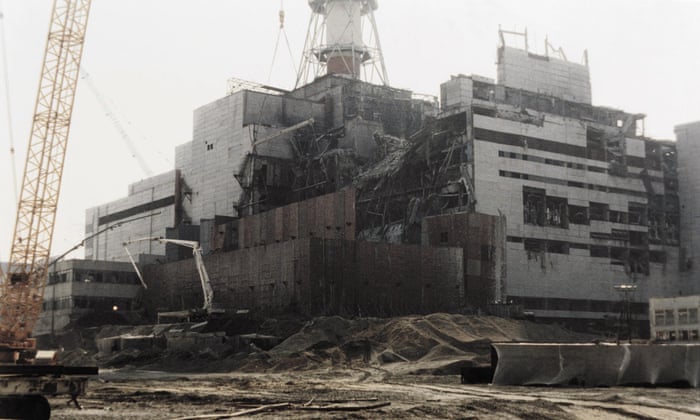 Workers who built the initial structure to cover the damaged reactor were exposed to very high levels of radiation. Photograph: Zufarov/AFP/Getty

Over the coming year, work will continue on the structure to make it airtight and dismantle parts of the sarcophagus inside, using remote-controlled cranes inside the structure. When it is completed in November 2017, the final structure should ensure that the site is airtight for 100 years.

People are banned from living in the zone around Chernobyl and access is only granted by special permit, but a few residents have returned in defiance of the ban. There are plans to develop solar power facilities in the area and Ukrainian authorities want to rebrand the exclusion zone as a destination for tourists, who can visit the city on a day trip from the capital, Kiev, and take an excursion around Pripyat, the ghost city near Chernobyl.

The nearly 50,000 residents of Pripyat, which was built to house Chernobyl workers, were evacuated the day after the disaster and never returned. Its eerie, deserted streets give a snapshot of the late Soviet period.

This entry was posted by admin on November 30, 2016 at 2:38 pm, and is filed under EVIDENCE, UKRAINE. Follow any responses to this post through RSS 2.0. Both comments and pings are currently closed.