« DOCUMENTARY TV: THE MAFIA – HEROIN MADE IT A GLOBAL CORPORATION
THE USA PUTS A $100M DRONE BASE next to a world heritage site in Africa » 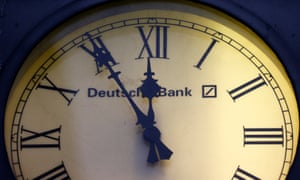 Deutsche Bank shares collapsed by nearly 7% taking it close to a 30-year low on Thursday evening following reports that hedge funds were pulling assets from it amid suggestions the German government may be forced to bail it out.

The US-listed shares of Germany’s biggest bank, which had already lost 17% of their value since it warned two weeks ago that it faces the prospect of a $14bn (£10.5bn) penalty from US authorities for mis-selling mortgage bonds a decade ago, closed down 82 cents, or 6.7 to $11.48 in New York trading.

It came as Germany’s second-biggest bank, Commerzbank, unveiled plans to cut nearly 10,000 jobs and suspend its dividend for the first time, in a move that has sent fresh jitters through Europe’s embattled banking sector.

The fresh concern over Deutsche’s future came after Bloomberg reported that about 10 hedge funds had withdrawn some of their business from the bank. The report forced the chairman of Deutsche’s hedge fund business, Barry Bausano, to take to the airwaves to reassure the market. He told CNBC that Deutsche, its prime brokerage division, which services hedge funds, was “still very profitable” but said there was “no question we have a perception issue”.

Deutsche, which has had been quick to deny reports it needed help from the German government, released a statement on Thursday to reassure investors that the majority of its clients were sticking with the bank. “Our trading clients are among the world’s most sophisticated investors. We are confident that the vast majority of them have a full understanding of our stable financial position, the current macroeconomic environment, the litigation process in the US and the progress we are making with our strategy,” the bank said.

Bloomberg had said the hedge fund withdrawals a were a sign of counterparties’ “mounting concerns about doing business with Europe’s largest investment bank”. However, the “vast majority” of the 200 clients that clear their derivatives through Deutsche had made no changes.

The fall in Deutsche Bank shares unsettled other bank stocks, sending Goldman Sachs down 2.8% and JP Morgan 1.6% and dragged the Dow Jones industrial average down 200 points, or 1.1%, to close at 18,143 points.

Commerzbank’s 9,600 job cuts amount to more than a fifth of its workforce and reflect challenges faced across Europe’s banking sector from record low interest rates and a shift to online banking.

The lender said it expected restructuring costs of €1.1bn (£948m) as it combined business operations and cut costs to offset the impact of low loan demand and negative European Central Bank interest rates.

The move is a more drastic reduction than at Deutsche Bank, which is axing about 10% of staff.

German-listed shares in Commerzbank had also come under pressure and were the biggest fallers on the Dax index after its dividend announcement spooked investors. They fell 3.1% to €5.80. The shares have fallen by nearly 40% since the start of the year, compared with a 24% drop in the banking index.

Commerzbank plans to merge its corporate and markets business with medium-sized German companies , while scaling back trading activities in investment banking.

That is expected to prompt a writedown of about €700m in the third quarter, leading to a quarterly net loss. Commerzbank expects to turn a small net profit in full-year 2016, down from €1.1bn last year.

The bank will concentrate on two customer segments in future: private and small business customers and corporate clients, with the restructuring expected to lift net return on tangible equity to at least 6% by the end of 2020 from 4.2% last year.

Commerzbank aims to add 2,300 jobs in areas where business is growing, which would ease the net headcount reduction to 7,300.

The bank’s supervisory board was reviewing the plans in a meeting on Wednesday and again on Thursday. Employee representatives have said they will resist job cuts.

Neil Smith, a Bankhaus Lampe analyst, said the staff cuts were large but Commerzbank’s target of reducing its annual cost base to €6.5bn by 2020, from €7bn last year, fell short of his expectations.

Smith said he had also hoped Commerzbank would make faster progress on winding down its exposure to the troubled ship-financing sector. “If they were able to exit shipping quickly and at not too big a cost, they might be able to restore the dividend rapidly afterwards,” he said.

Commerzbank said it would cease dividend payments for the time being to cover restructuring costs.

One of the bank’s top 10 shareholders said the drastic cost-cutting would be hard for employees but was unavoidable to make the bank more efficient. “I assume Commerzbank won’t pay a dividend before 2020 and that is terrible,” said the investor, who declined to be named.

The German government holds a stake of more than 15% in Commerzbank, a legacy of its €18bn bailout of the lender in the financial crisis.

This entry was posted by admin on September 30, 2016 at 9:10 am, and is filed under EVIDENCE. Follow any responses to this post through RSS 2.0. Both comments and pings are currently closed.