EL HUMMER, LOS ZETAS FOUNDER, will be extradited to the USA

Jaime González Durán (aka: El Hummer) is a former Mexican drug lord who was one of the 31 original founding members and third-in-command of the criminal organization known as Los Zetas.

‘El Hummer': the alleged intellectual author of the murder of singer Valentín Elizalde.  His extradition represents highest level member of Los Zetas to be extradited.

Mexico City.- Jaime González Durán, “El Hummer”, one of the founders of the Los Zetas criminal group , will be extradited to the United States.

A federal court put an end to González Durán’s legal battle to avoid its delivery to US justice, by once and for all denying it the amparo against the order to be extradited and will tried for drug trafficking in the United States.

The Tenth Criminal Collegiate Court in Mexico City concluded that all the arguments presented by the alleged criminal leader against his extradition were unfounded and inoperative, says the amparo ruling under review.

“The claimed act in which the Secretary of Foreign Affairs granted the extradition of the complainant is a sovereign act, the discretionary power of the Federal Executive, which in no way is exercised arbitrarily, but is conditioned on the compliance with the procedure the constitutional, legal and conventional requirements, “reads the ruling.

“Therefore, if as stated in this resolution, the Secretary of Foreign Affairs (SRE) complied with the formalities of the procedure and also founded and duly motivated the claimed act, it is evident that the Executive was in a position to access the formal request to extradite the revisionist to the requesting country.” 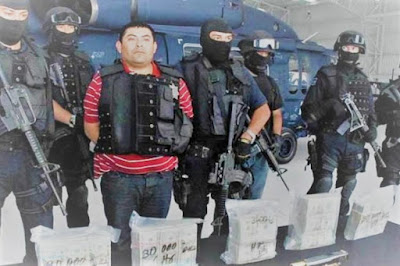 “El Hummer” will be tried in the Federal Court of the District of Columbia , based in Washington, for criminal association,  manufacturing and distributing 5 kilos or more of cocaine and one thousand kilos or more of marijuana for importation into the United States.

This represents  the most important that has been brought before a US Court against Los Zetas and includes arrest warrants against other former leaders such as brothers Miguel and Omar Treviño Morales, nicknamed “El 40″ and “El 42″.

The defense of the former military accused that the extradition request lacked sufficient evidence to justify the prosecution, however, the court established that in extradition processes the Mexican authorities cannot assess the evidence of the requesting country.

He also stated that the accusation for which they intended to judge him had prescribed; however, the collegiate body also ruled that this argument was unfounded.

“El Hummer” was born on January 22, 1976 in the Municipality of Aquismón, San Luis Potosí, and in his youth he entered the ranks of the Army, from which he defected when he was commissioned as an agent of the Federal Judicial Police in Tamaulipas.

To date, González Durán is imprisoned in the Federal Criminal Court of Hermosillo, Sonora.

Although now his extradition is judged, it is not clear what the position of the federal government will execute his delivery,  or  if it will proceed to its immediate delivery or to defer it until it verifies the sentences it has pending for crimes committed in Mexico.

In the country, he has been sentenced in three different proceedings to penalties that together add up to 73 years in prison.

In one, he was sentenced to 35 years in prison for organized crime and illegal deprivation of liberty; in another, at 16 years and six months for money laundering; and in the last case at 21 years, nine months, for violation of the Law of Firearms and Explosives.

This entry was posted by admin on February 26, 2020 at 4:58 pm, and is filed under EVIDENCE. Follow any responses to this post through RSS 2.0. Both comments and pings are currently closed.