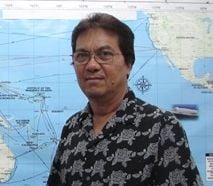 A former Cabinet official of the Federated States of Micronesia government and three others have been charged in an influence-peddling, money laundering and conspiracy case that alleges more than 100 foreign-flagged ships were given bogus FSM vessel registrations for profit.

The charges were filed on April 17 in the FSM Supreme Court’s trial division in Pohnpei on April 17 and the FSM President’s office announced the charges and court appearances of the three defendants on Tuesday.

Three of the defendants were represented in court during a hearing on April 23 for an initial appearance, according to FSM President David Panuelo’s office.

The four who were charged are:

• Lukner Weilbacher, faces theft and selling political influence, among other charges. During the administration of FSM President Peter Christian, Weilbacher was the secretary of the Department of Transportation, Communications and Infrastructure for the FSM national government.

• Renwick Weilbacher, a former quarantine officer and nephew of Lukner Weilbacher, has been charged with money laundering and conspiracy;

• Martin Jano, an attorney who once had an insurance business on Guam, has been charged with as part of the alleged conspiracy. Jano was the president of two liability insurance companies, Casualty Assurance Risk Insurance Brokerage Company which was incorporated in 1986 on Guam and subsequently denied renewal of its Guam license, and CARIB’s successor corporation, Trans-Pacific Insurance, incorporated in 1989 in the Federated States of Micronesia. The insurance companies were not named in the case.

Sharma did not appear for the April 23 initial court appearance and is believed to be no longer in the jurisdiction of the FSM. He has business ties in Thailand, according to the FSM government.

The case alleges that more than 100 foreign ships, from small to medium fishing vessels to massive oil tankers, paid for registrations to become FSM-registered ships.

As of press time, at least one of the oil tankers that was docked in Taiwan still had FSM-flagged registration, according to a ship tracking website. Many of the ships are from China.

The alleged scheme began in 2015, the case alleges. Each ship paid from $2,000 to more than $14,000 each for the allegedly bogus registration. Oil tankers paid the highest registration fees, the 260-page court document states.

The bogus ship registrations were first reported in the FSM in 2016 by Bill Jaynes, a journalist based in Pohnpei who runs the Kaselehlie Press.

In 2016, Jaynes wrote, Samoa also fell prey to someone issuing similar fake documents on their behalf. In 2014, the Ping Da 7, a huge refrigerated vessel flagged by Kiribati slammed into the reef in Pohnpei. The owner simply walked away and Kiribati had no responsibility, Jaynes reported.

In 2010, the Deepwater Horizon offshore oil rig exploded, spilling millions of gallons of crude oil into the Gulf of Mexico. The oil platform was registered in the Marshall Islands, but RMI was not held responsible for the incident, Jaynes reported.

This entry was posted by admin on April 28, 2020 at 3:55 pm, and is filed under EVIDENCE. Follow any responses to this post through RSS 2.0. Both comments and pings are currently closed.