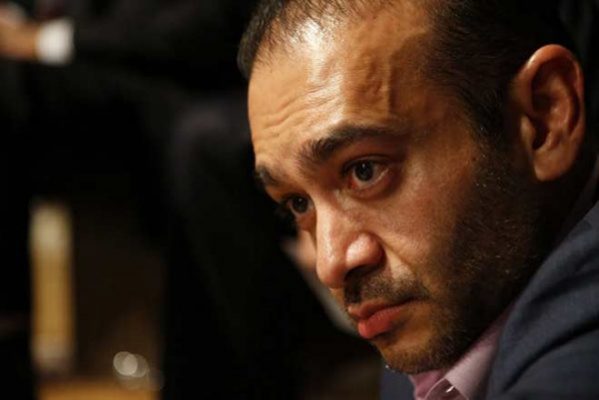 London: The five-day extradition trial of fugitive diamond merchant Nirav Modi will begin from May 11 in a part-remote setting, a UK court has ordered.

The 49-year-old, who has been lodged at Wandsworth Prison in south-west London since his arrest last year, appeared before the court via video conferencing due to the social distancing procedures put in place across the UK courts in view of the COVID-19 pandemic.

He spoke only to confirm his name and date of birth during the hearing, which took place at Westminster Magistrates’ Court in London.

District Judge Samuel Goozee, who presided over the case management hearing, expressed some reservations about the extradition hearing going ahead next month as scheduled under the current lockdown.

But it was agreed between all the parties that a trial run of the court’s CVP (Common Viewing Platform) will take place during a lawyers-only hearing on May 7 ahead of the final hearing.

“Some prisons are producing prisoners in person, so I will direct Wandsworth Prison to produce Mr Modi in person for the trial from May 11. If that is not practicable, his participation by live link remains a backstop,” Judge Goozee concluded.

It was agreed that a limited number of legal representatives will be present physically in court for the trial as witnesses give their evidence via videolink. Modi will be able to observe the proceedings either from the dock, if the prison authorities agree to a physical transfer, or via the judiciary’s common viewing system from Wandsworth Prison.

The five-day hearing from May 11 relates to the Indian government’s extradition request certified by the UK government last year.

The case, filed by the Central Bureau of Investigation (CBI) and the Enforcement Directorate (ED), relates to a large-scale fraud upon an Indian Public Sector Undertaking (PSU) through the fraudulent obtaining of letters of understanding (LoUs) and the laundering of the proceeds of that fraud.

Two additional charges of “causing the disappearance of evidence” and intimidating witnesses or “criminal intimidation to cause death” were added on by the CBI and certified earlier this year.

“The May 11 extradition hearing is going ahead and the new request (two additional offences part of the CBI case) has not been joined but will be dealt with at a separate later hearing, probably in July,” said the Crown Prosecution Service (CPS), appearing on behalf of the Indian authorities.

CPS barrister Nick Hearn indicated that the government of India’s representatives would be following the proceedings and giving instructions via the court’s online common viewing platform, given the coronavirus related travel restrictions.

“We have received comprehensive responses in writing from the government of India, which would reduce the likely length of cross-examinations,” said Hearn.

It was also confirmed that the diamond merchant would not be giving evidence in the case, but his legal team plans to produce around six witnesses, including a jewellery expert as well as judicial and prisons experts.

“We are very anxious to hold the hearing if we can, if Mr Modi’s participation and that of the witnesses seems feasible,” said Modi’s barrister Clare Montgomery, during the tele-conference hearing on Tuesday.

Judge Goozee has set May 4 as the deadline for the skeleton arguments, draft charges and any further evidence to be presented in the case.

In reference to the “wealth of documentary evidence relied on in the case”, he has sought an agreed pre-trial reading list by the end of this week.

Most of the legal cases in the UK have incorporated videolink and telephonic options where possible, with all new jury trials suspended amid the social distancing rules in place to combat the coronavirus pandemic.

Modi, whose Wandsworth prison is considered one of the most over-crowded in England, made a fifth attempt at bail in the High Court last month, which was rejected as the judge ruled that he continued to pose a flight risk.

He was arrested on March 19, 2019, on an extradition warrant executed by Scotland Yard on charges of fraud and money laundering brought in by the Indian government.

This entry was posted by admin on April 29, 2020 at 12:33 pm, and is filed under EVIDENCE. Follow any responses to this post through RSS 2.0. Both comments and pings are currently closed.