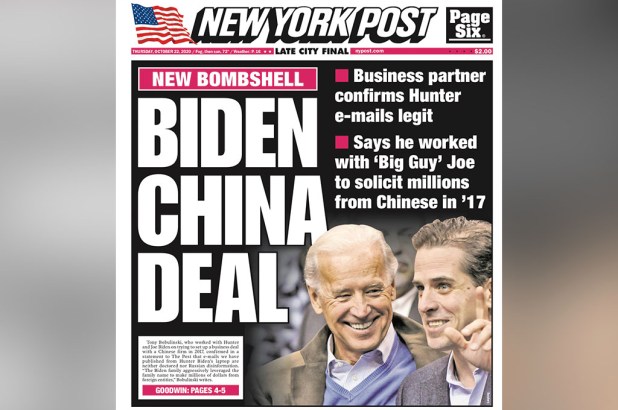 Wait until Scranton hears about this.

One of Joe Biden’s ways of contrasting himself with President Trump has been to declare the election a battle of Park Avenue values vs. Scranton, Pa., values.

Now we learn that Biden has secretly been playing footsie with China.

The statement Wednesday night asserting that the former vice president was a willing and eager participant in a family scheme to make millions of dollars by partnering with a shady Chinese Communist firm is a singular event in a presidential race already overflowing with drama and intrigue.

The dynamite assertion, believable because it aligns with earlier information we know to be true, came in a statement by Tony Bobulinski, who describes himself as a former partner of Hunter Biden, Joe Biden and Joe’s brother Jim in the China scheme. Bobulinski unloads his bill of accusations in blunt but precise language and detail.

He confirms that he was one of the recipients of the May 13, 2017, e-mail published by The Post eight days ago. That e-mail, from another partner in the group, laid out cash and equity positions and mysteriously included a 10 percent set-aside for “the big guy.”

Sources have said the “big guy” was Joe Biden. In a matter-of-fact manner, Bobulinski states that the “e-mail is genuine” and that the former vice president and the man leading in the 2020 race is indeed “the big guy.”

That claim alone rips out the heart of nearly everything Joe Biden has ever said about Hunter’s many businesses and Joe’s knowledge of them. His repeated insistence that the two never spoke of the son’s global sources of money didn’t pass the laugh test.

After all, they traveled together to China on Air Force Two, where Hunter landed a $1.5 billion commitment from a government-controlled Chinese bank. Then there was Hunter’s $83,000-a-month gig on the board of a Ukrainian energy company — despite his lack of experience in Ukraine or knowledge of energy.

It was no coincidence that the vice president was the Obama administration’s point man in both countries. Wherever Joe went, Hunter went along, not to do good, but to do well. Very well.

There were similarly lucrative deals in Russia, Romania and ­Kazakhstan — that we know of.

Now, because his role in the China deal has been credibly confirmed, it’s beyond dispute that Joe didn’t just know what was going on. At least in this case, Joe was a player and had his hand out.

To that point, in perhaps the most devastating paragraph of the 689-word statement, Bobulinski writes that Hunter Biden also referred to his father as “my chairman and frequently referenced asking him for his sign-off or advice on various potential deals that we were discussing.”

“I’ve seen Vice President Biden saying he never talked to Hunter about his business,” says Bobulinski, who was the CEO of the company being formed. “I’ve seen firsthand that that’s not true, because it wasn’t just Hunter’s business, they said they were putting the Biden family name and its legacy on the line.”

That’s a remarkable line, one suggestive of the idea that the plan was always to sell Joe Biden’s fame and influence. In ­effect, Hunter, and sometimes Joe’s brother Jim, were turning the office of the vice presidency of the United States into a pot of gold for themselves.

What is not clear yet is whether Joe Biden had secret stakes in any of Hunter’s other deals. As for this one, while the date on the May 2017 e-mail would be nearly four months after Biden left the White House, it’s not known when discussions among the partners and with the Chinese first began. Certainly they started before the e-mail.

And while such deals would be legal for Joe Biden when he left government service, the facts take on extra significance during a campaign where China policy is a frequent topic — and a big dispute between Trump and Biden.

Earlier, during the Democratic primaries, Biden scoffed at the notion that the Asian power is a threat, saying, “China is going to eat our lunch? Come on, man.”

When Trump blocked flights from China during the early days of the coronavirus outbreak, Biden accused him of “xenophobic fear-mongering” and labeled the president a “racist” for calling the disease the “Wuhan virus.”

Bobulinski, a former wrestler at Penn State University who spent four years in the Navy, insists he has voluminous evidence to back up his explosive charges, reportedly including documents, e-mails, messages and other proof.

Late Wednesday night, he uploaded many to a file- sharing service.

He also says that he turned over all his evidence to two Senate committees Wednesday that requested it.

An earlier report by one panel, the Committee on Homeland Security and Governmental Affairs, chaired by Sen. Ron Johnson (R-Wis.), revealed things about the Biden partnership that Bobulinksi says he didn’t know.

As he puts it: “The Johnson Report connected some dots in a way that shocked me — it made me realize the Bidens had gone behind my back and gotten paid millions of dollars by the Chinese, even though they told me they hadn’t and wouldn’t do that to their partners.”

He blasts much of the media and Big Tech for shielding Biden from questions after The Post published the China e-mail and one on Ukraine. Both were on a laptop computer Hunter left with a Delaware repairman and never retrieved.

“I could no longer allow my family’s name to be associated or tied to Russian disinformation or implied lies and false narratives dominating the media right now,” Bobulinski wrote.

While it’s far too early to say what effect the dramatic disclosures will have on the race, Trump is certain to raise them at Thursday’s debate.

Suffice it to say that Biden’s response will command America’s attention.

Full statement from Tony Bobulinski to The New York Post

My name is Tony Bobulinski. The facts set forth below are true and accurate; they are not any form of domestic or foreign disinformation. Any suggestion to the contrary is false and offensive. I am the recipient of the email published seven days ago by the New York Post which showed a copy to Hunter Biden and Rob Walker. That email is genuine.

This afternoon I received a request from the Senate Committee on Homeland Security and Government Affairs and the Senate Committee on Finance requesting all documents relating to my business affairs with the Biden family as well as various foreign entities and individuals. I have extensive relevant records and communications and I intend to produce those items to both Committees in the immediate future.

I am the grandson of a 37 year Army Intelligence officer, the son of a 20+ year career Naval Officer and the brother of a 28 year career Naval Flight Officer. I myself served our country for 4 years and left the Navy as LT Bobulinski. I held a high level security clearance and was an instructor and then CTO for Naval Nuclear Power Training Command. I take great pride in the time my family and I served this country. I am also not a political person. What few campaign contributions I have made in my life were to Democrats.

If the media and Big Tech companies had done their jobs over the past several weeks I would be irrelevant in this story. Given my long standing service and devotion to this great country, I could no longer allow my family’s name to be associated or tied to Russian disinformation or implied lies and false narratives dominating the media right now.

After leaving the military I became an institutional investor investing extensively around the world and on every continent. I have traveled to over 50 countries. I believe, hands down, we live in the greatest country in the world.

What I am outlining is fact. I know it is fact because I lived it. I am the CEO of Sinohawk Holdings which was a partnership between the Chinese operating through CEFC/Chairman Ye and the Biden family. I was brought into the company to be the CEO by James Gilliar and Hunter Biden. The reference to “the Big Guy” in the much publicized May 13, 2017 email is in fact a reference to Joe Biden. The other “JB” referenced in that email is Jim Biden, Joe’s brother.

Hunter Biden called his dad ‘the Big Guy’ or ‘my Chairman,’ and frequently referenced asking him for his sign-off or advice on various potential deals that we were discussing. I’ve seen Vice President Biden saying he never talked to Hunter about his business. I’ve seen firsthand that that’s not true, because it wasn’t just Hunter’s business, they said they were putting the Biden family name and its legacy on the line.

I realized the Chinese were not really focused on a healthy financial ROI. They were looking at this as a political or influence investment. Once I realized that Hunter wanted to use the company as his personal piggy bank by just taking money out of it as soon as it came from the Chinese, I took steps to prevent that from happening.

The Johnson Report connected some dots in a way that shocked me — it made me realize the Bidens had gone behind my back and gotten paid millions of dollars by the Chinese, even though they told me they hadn’t and wouldn’t do that to their partners.

I would ask the Biden family to address the American people and outline the facts so I can go back to being irrelevant — and so I am not put in a position to have to answer those questions for them.

I don’t have a political ax to grind; I just saw behind the Biden curtain and I grew concerned with what I saw. The Biden family aggressively leveraged the Biden family name to make millions of dollars from foreign entities even though some were from communist controlled China. 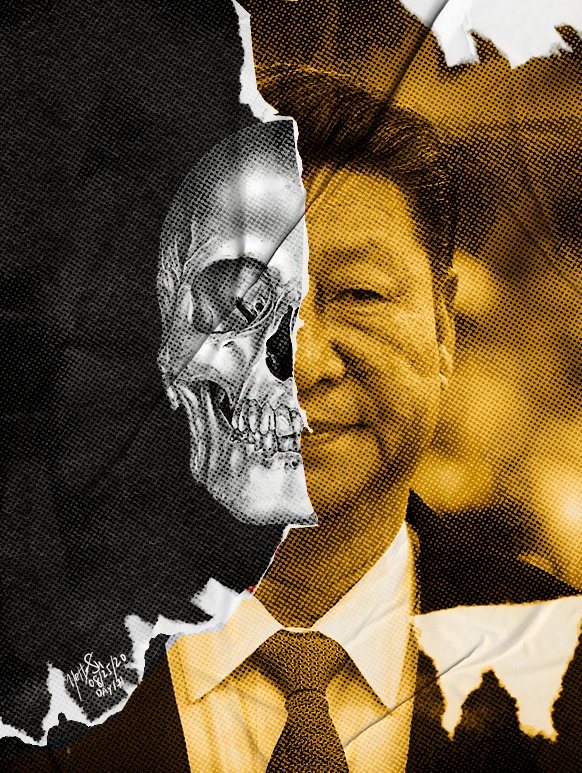 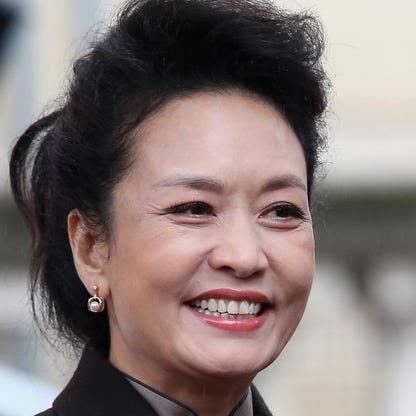 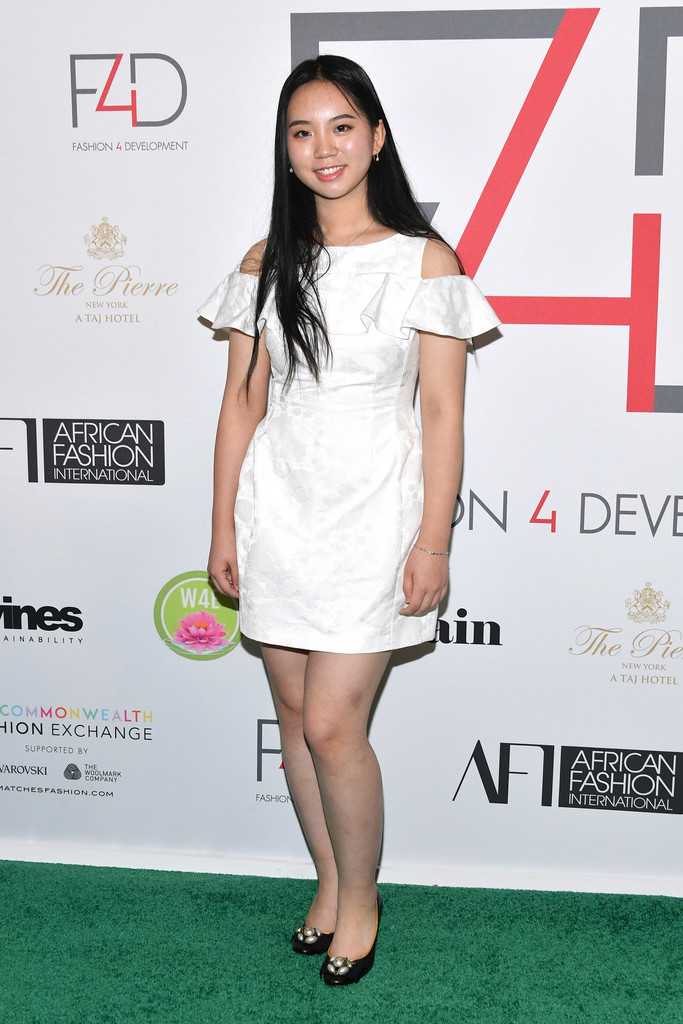 This entry was posted by admin on October 22, 2020 at 9:31 am, and is filed under EVIDENCE. Follow any responses to this post through RSS 2.0. Both comments and pings are currently closed.