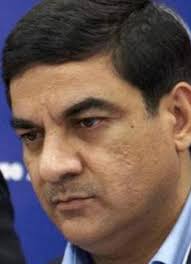 New Delhi: The Enforcement Directorate (ED) has filed a chargesheet against absconding arms dealer Sanjay Bhandari in connection with a money-laundering case against him for alleged possession of undisclosed assets abroad, officials said on Tuesday.

They said the prosecution complaint or the chargesheet was filed on Monday before a special court set up under the Prevention of Money Laundering Act (PMLA) here.

The court is yet to take cognisance of the chargesheet, the officials said.

They said in the chargesheet, the ED has mentioned about specific charges of alleged possession of undisclosed properties by Bhandari in foreign countries.

This also includes his links to a flat in London, in which the agency had questioned Robert Vadra, the son-in-law of Congress president Sonia Gandhi and husband of party leader Priyanka Gandhi Vadra.

It has been alleged by the agency that Vadra acquired this London-based asset and e-mails purportedly exchanged between him and Bhandari regarding renovation of the flat are part of the evidence in the ED case.

Vadra has denied any wrongdoing. His legal firm had also denied that he owned the London property directly or indirectly.

Bhandari, who the central agency says has never cooperated with it in the probe, has run away from the country and was last stated to be in the UK or a nearby country.

The ED had slapped money-laundering charges against Bhandari and others in February, 2017.

Bhandari’s case first came to light after the Income Tax department conducted searches against him in April, 2016 and recovered certain “sensitive” official defence documents from his premises.

The tax department had booked him under criminal charges of the anti-black money law of 2015. The Enforcement Directorate (ED) has attached controversial arms dealer Sanjay Bhandari’s assets. The total worth of the attached assets is Rs 21 crore.

Bhandari is one of the many rich fugitives who fled to London to evade arrest by the enforcement agencies.

The move by the ED makes Bhandari the first accused to have assets attached under the new Black Money (Undisclosed Foreign Income and Assets) Act. With going after black money high on the BJP-led NDA government’s agenda, the new law was brought in last year to clamp down on offenders who had made a mockery of the country’s lax laws when it came to dealing with black money stashed abroad.

In February, the Income Tax Department, which initiated the probe into Bhandari’s allegedly shady deals, had attached 12 bank accounts and lockers of as many as six companies associated with the arms dealer.

The IT department had also issued a provisional attachment order for his properties in Greater Kailash, Panchsheel Enclave, Shahpur Jat and Vasant Vihar in South Delhi, and in Gurgaon. The IT department, according to a report, also found evidence of Bhandari trying to move his assets to a trust based out of Dubai to evade action under the new law.

This came to light after sleuths had apprehended his chartered accountant on his way back to Delhi after meeting the arms dealer in London.

Bhandari, connected to the who’s who of the country’s political and business elite, was also booked by the Delhi Police under the strict Official Secrets Act. The case was registered after documents related to sensitive defence deals between the Government of India and foreign players were found on his premises during raids.

However, in a major blot on the reputation of the agencies, despite being under investigation, with his passport impounded by the ED, the arms dealer managed to slip to London. Reports say he may have gone through Nepal and used a foreign passport, which he had not declared to the Indian authorities.

The Delhi Police was in for another embarrassment when Interpol refused to issue a Red Corner notice, citing that the case under OSA appeared to be political in nature, and did not fulfil the criterion of a Red Corner notice. Bhandari, like Vijay Mallya and Lalit Modi, continues to be in London.

THE HISTORY OF THE CASE

Bhandari, son of renowned homeopath Rajinder Bhandari, first hit the headlines in May 2016. The grapevine had it that he had played a key role in some of the biggest defence deals of recent years.

Bhandari is no ordinary arms dealer. If his call records are to be believed, he is connected to the high and mighty of India’s political establishment cutting across party lines, from Robert Vadra to Civil Aviation Minister Ashok Gajapathy Raju.

Investigators had found that he also had extensive contacts with journalists and representatives of defence equipment manufacturers like Thales and Airbus.

Before venturing into the murky world of arms dealing, Bhandari was embroiled in a case of forgery in 1994, when the deputy general manager of the Vijaya Bank complained that Bhandari and others had defrauded the bank to the tune of about Rs 47 lakh between 1987 and 1990.

According to a French website, Bhandari started out in the defence sector in the late 1990s. The website, which describes him as being close to the Gandhi family, said he worked on the 1997 Sukhoi deal.

The ED is also investigating whether Bhandari helped Vadra acquire a posh mansion in London. Bhandari’s firm has a European subsidiary called Offset Europe, headquartered in Piccadilly, London. In June, Bhandari was stopped from boarding a British Airways flight to the UK after an alert to the immigration authorities against him. Both Vadra and Raju have denied links with the arms dealer.

IT sleuths had raided 18 premises linked to Bhandari after intelligence agencies flagged his “phenomenal rise” in the last seven years. Bhandari founded Offset only in 2008, after the 2006 Defence Procurement Policy mandated a 35% local component in every defence deal.

Bhandari had set up OIS-Advanced Technology Private Ltd in India in 2008, with a paid up capital of just Rs 1 lakh. OIS even ventured into manufacturing military radars, and this meteoric rise had flummoxed the intelligence agencies. They had submitted a report, raising suspicions about the working of his companies after the 2014 Lok Sabha elections.

Action against Bhandari followed secret reports by the intelligence agencies, where they reportedly found that Bhandari’s company was engaged by the Swiss defence manufacturer Pilatus to help land the Rs 4,000 crore trainer aircraft deal. For his services, Bhandari is said to have received Rs 69.38 crore from 35 shell companies between 2009 and 2014.

His firm also received a million Swiss francs from Pilatus Flugzeugwerke AG-SPA, two years after it landed the Rs 4,000 crore deal for 75 trainer aircraft. The BJP government had indicated it may probe the deal.

The classified documents at the heart of the probe, however, pertain to a refuelling aircraft deal. Airbus had won a tender to supply six A330 MRTT aircraft to India under the UPA-2 regime. The tender, though, was scrapped by the Narendra Modi government due to cost concerns, according to Aviation Week.

This entry was posted by admin on June 3, 2020 at 10:21 am, and is filed under EVIDENCE. Follow any responses to this post through RSS 2.0. Both comments and pings are currently closed.