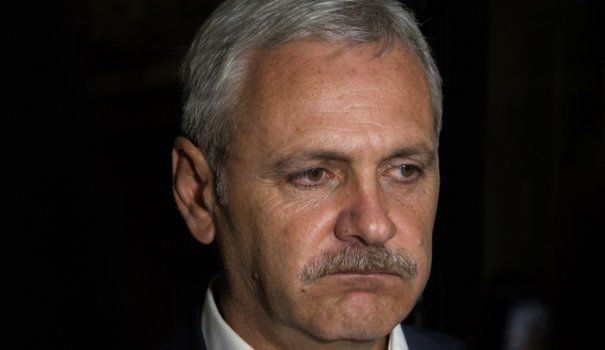 ABOVE + BELOW – Liviu Nicolae Dragnea; born 28 October 1962) is a Romanian engineer and politician. He currently serves as President of the Romanian Chamber of Deputies since December 2016, following that year’s legislative election. The leader of the Social Democratic Party (PSD) and a former member of the Democratic Party (PD), he was Minister of Administration and Interior in Emil Boc’s cabinet in January–February 2009. He has represented Teleorman County in the Chamber of Deputies since December 2012, when he became deputy prime minister and Minister of Administration and Regional Development. He resigned from the cabinet in May 2015, following a conviction in a case involving electoral fraud, for which he received a two-year suspended sentence in April 2016.

Romanian farmer Ion Popescu didn’t think twice in 2014 when he got the chance to save nearly 19,000 euros in taxes on the price of a new, European-made tractor.

True, he had a grant from the European Union’s National Rural Development Program to cover the tractor’s 78,000 euro cost. But under the terms of the grant, he would have had to dig into his own pocket to pay the value-added tax (VAT), a hefty 24 percent in Romania at the time.

Then a company called Proinvest made him an offer he did not want to refuse.

Its salesmen said he wouldn’t have to pay the VAT if he bought the tractor from them. Popescu jumped at the chance, because otherwise he might have had to take out a loan to pay the tax.

He told reporters from RISE Project, OCCRP’s Romanian member center, that when the tractor arrived, the paperwork indicated the machinery had been imported not by Proinvest but by a Bulgarian company called Fan Speed.

Popescu gave it little thought. “I have no idea about that,” he said. “I just wanted to get the tractor without [paying] VAT.”

Four years later, prosecutors say Popescu’s Proinvest deal was just one of nearly 200 that targeted farm equipment imported under EU-funded development programs, depriving the Romanian state of about 1.2 million euros in VAT revenues on machinery worth about 5 million euros.

The case has just gone to trial in Romania’s High Court of Cassation, where a Romanian company and two well-connected Romanians are charged with tax evasion. If convicted, the defendants face up to 15 years in prison.

Prosecutors seek to recover the 1.2 million euros in taxes from the defendants.

This wiretapped conversation illustrates a crucial element in the scheme that unfolded between 2012 and 2014. “Snowballing” describes the VAT avoidance system used by an organized crime group that Romanian prosecutors allege is associated with Liviu Dragnea, the country’s most powerful politician. It involves importing the equipment into Romania, but then exporting it to neighboring Bulgaria and re-importing it back before selling it to customers. This allows the customers to be classified as “importers,” freeing them from the obligation to pay VAT.

Dragnea is the president of the ruling Social Democratic Party, president of the Chamber of Deputies, and a former deputy prime minister. An engineer by training, he is also the former top official of Teleorman County, which borders Bulgaria and plays a major role in the scam.

Anatomy of a Fraud

Some, but not all, of the 193 vehicles involved were bought from France, Germany, and Poland using funds from the EU’s National Rural Development Program. In 2014, Dragnea was one of Romania’s three vice prime ministers and the head of the Regional Development and Public Administration Ministry.

The river of money flowing from the EU was a tempting target. By 2014, the total available to Romania was 8 billion euros, to be disbursed to machinery importers and farmers through the country’s Ministry of Agriculture.

But criminals found a way to tap into the money by exploiting an EU rule that states goods can be imported tax-free from one EU country by another; the VAT is charged only when the goods are sold to the final consumer, in whatever country that happens.

In Popescu’s case, the legal procedure would have been for a Romanian company to import the tractor, sell it to Popescu, and to charge him 24 percent VAT upon delivery, sending the tax on to the taxing authority and finance ministry. But by “snowballing” the vehicle across the border into Bulgaria, the fraudsters were able to generate customs documents indicating it had actually been imported by a Bulgarian company. 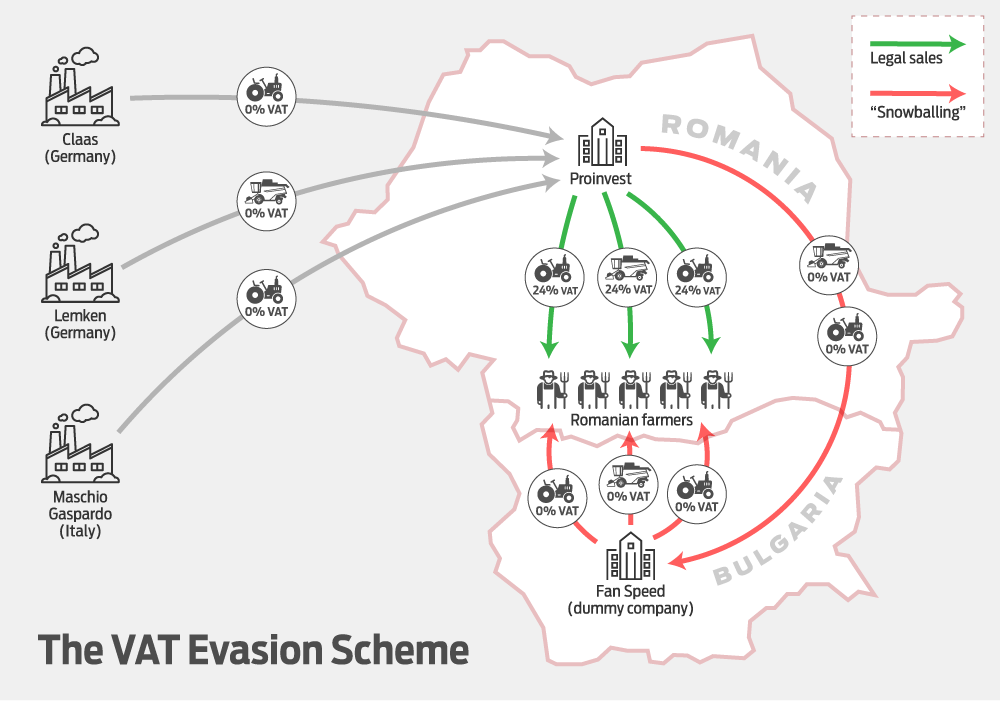 The scheme hinged on the definition of “re-seller.” Under the law, the importer doesn’t pay the VAT unless and until it re-sells the item to the final consumer– in this case, the farmer.

If Proinvest had simply sold that machinery directly to farmers, it would have had to pay the VAT as the re-seller. So instead, the gang generated fake sales invoices showing the machinery was sold to a company called Fan Speed in Bulgaria, a tax-free transaction as both Romania and Bulgaria are EU members. Then gang members detoured the equipment across the Bulgarian border to generate corroborating customs documents.

Fan Speed, in turn, generated documents indicating that the Romanian farmers themselves were re-sellers, rather than the ultimate consumers, and so not liable for the VAT either. In truth, the farmers did not resell the machines to anyone, but kept them.

Proinvest, owned at the time by Marian Fiscuci, one of Dragnea’s closest associates, who declined to comment on the case when contacted by RISE Project. Prosecutors say Proinvest was controlled by an organized crime gang that has operated in Teleorman County for nearly two decades. 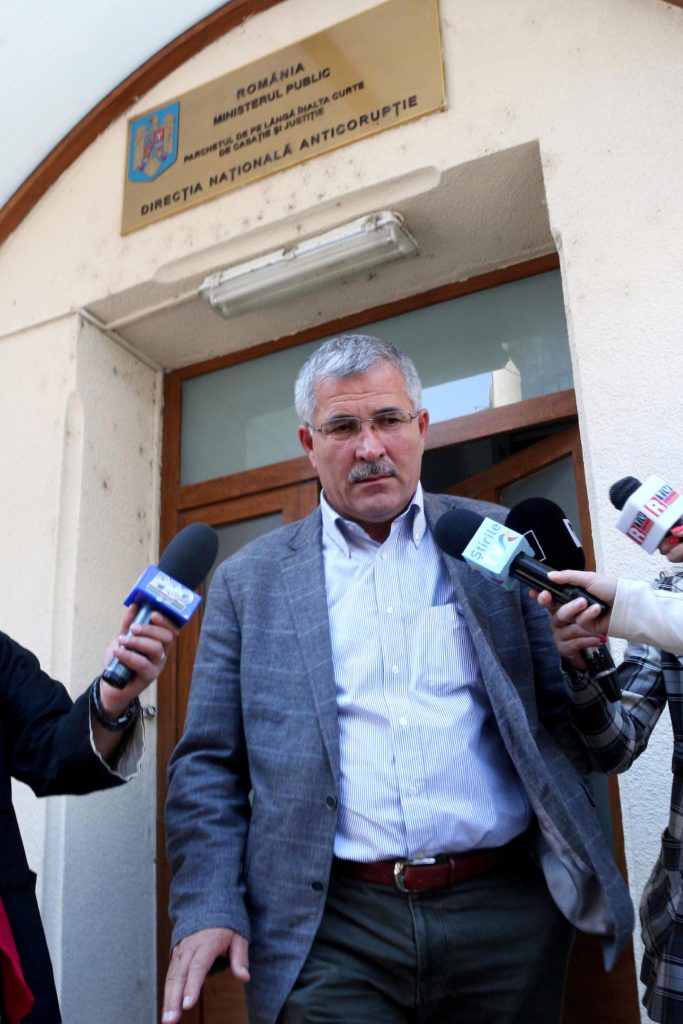 Fiscuci supervised the tax-free sale of the equipment, according to hundreds of wiretaps reviewed by reporters for RISE Project in Romania and Bivol, an investigative website in Bulgaria.

Fan Speed is owned by Adrian Simionescu, a former member of the Romanian Parliament who set up the company with the help of some influential Bulgarians. Prosecutors say its role was to produce documents rather than conduct real commerce, as it had no assets or offices, just an accountant and a contract for a temporary parking lot in Nikopol, a Bulgarian town on the Romanian border.

For several years, Simionescu was the president of the Teleorman County chapter of the Social Democrat Party, and was second-in-command at the county level when Dragnea was chief.

Prosecutors say the scheme was devised with the help of a company called Contexpert, which kept Proinvest’s books. This company was owned until 2012 by Florin Tunaru, a personal adviser to Dragnea, who advised Simionescu and Fiscuci on tax requirements.

Tunaru served as vice president of the Romanian Tax Authority from 2012 to 2017, and is now the vice president of Romania’s Audit Court, a position Romanian news organization Digi24 reported he gained with the support of Dragnea’s party. He was not charged in connection with the scheme. 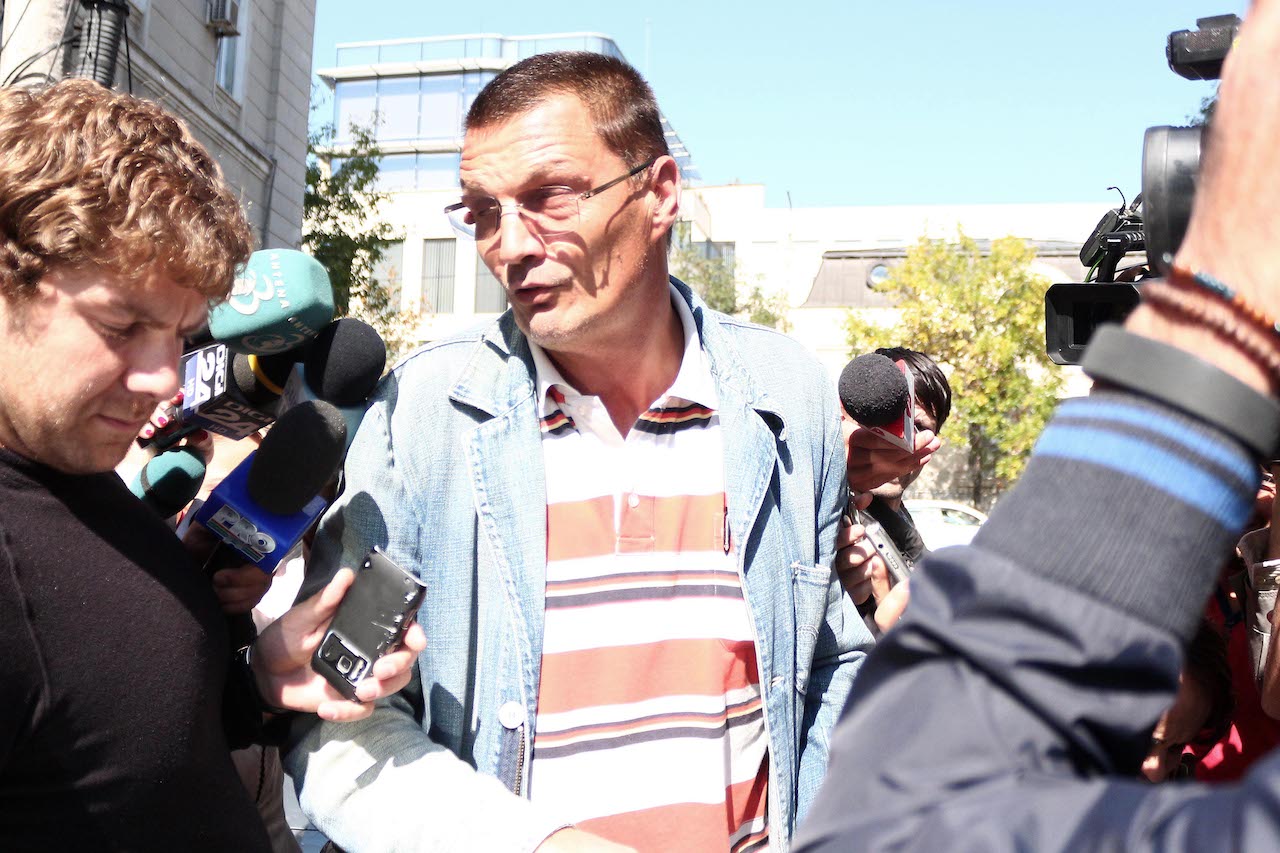 Banking and other records show that Proinvest marketed the scheme to clients, who in return wired the money for the vehicles to accounts owned by Fan Speed at the Unicredit Bulbank bank in Pleven, a city in northern Bulgaria just across the border from Teleorman County.

From here, the money was wired to the Romanian accounts of Proinvest in the local branch of BRD Bank in Alexandria, the capital of Teleorman County.

Simionescu told RISE Project he is innocent. “The accusation of tax evasion is wrong. At most the tax authority could say that some transactions are artificial, and could establish that we have to pay some taxes,” he said. “We did nothing wrong.”

EXAMPLE: HOW THE SCHEME WORKED

On May 20, 2014, Fan Speed was contacted by Arges Agro Proiect, a Romanian company that had won an EU-funded contract to deliver a 159,000 euro tractor.

The company got the money from the National Rural Development Program, the EU initiative that is to run through 2020. Arges Agro Proiect is controlled by Marius Jurubita, a Romanian official who was not charged in the scheme and told RISE Project he didn’t remember much about the transaction.

His tractor, an Axion 940, was delivered to his gate using the snowball scheme: imported by Proinvest, sold to Fan Speed, and from Fan Speed on to Marius. Customs records show that on July 4, 2014, the tractor crossed the border from Romania to Bulgaria at 4:32 am and landed in Nikopol, a small town near the border.

Making a more than 350-kilometer loop on a single day, it then traveled to Ruse, another Bulgarian border town, and then to its final destination in a small village in Arges County, Romania. The tractor entered Bulgaria with a price of 156,000 euros and departed hours later with a value just 3,000 euros higher — but having paid zero taxes to anyone.

Had the tractor simply been delivered from Proinvest to Marius, the 24 percent VAT on 159,000 euros would have been 38,160 euros. Thus, the payment of VAT was avoided. And this happened again and again.

Prosecutors say the Bulgarian end of the operation was mostly handled by Iliana Antonova Lazarova. She runs an accounting company called Ina Active in Pleven and handles Fan Speed’s accounts. Lazarova met Simionescu in 2011 when he set up Fan Speed, prosecutors say.

She is the wife of Judge Rumen Petrov Lazarov of the Pleven regional court. A decade ago, the judge’s name popped up in the “Krayso the Black” affair, which shook the Bulgarian judicial system. The lobbying scandal involving a businessman who sought favors from prominent judges, prosecutors, and other officials.

Judge Lazarov told the Supreme Judicial Council investigating the scandal that “Krasyo” — the nickname for Krasimir Georgiev — approached Lazarov many times in 2008 seeking favors regarding ongoing cases. Lazarov insisted that despite numerous contacts with Krasyo, he never did anything for him. The judge was never charged in the case.

It is unclear what connection Lazarov might have had with his wife’s firm, although in 2015 he declared 3,300 euros in dividends he had received from the firm the previous year.

Contacted by Bivol, Lazarova said that from her perspective, all the transactions were legal. “Mr. Simionescu paid all the taxes due in Bulgaria,” she said. “I checked personally every company, every transaction, and they are all real and regular.”

Lazarova temporarily took over management of Fan Speed in 2016. She explained that Simionescu had told her he was entering the Romanian Parliament as a member “and he can’t be a manager any more.”

On Nov. 20, 2018, Simionescu resumed control of Fan Speed. “He wants to shut down the company,” Lazarova explained. “He has not operated this business since 2016.”

Indeed, the business registry shows that the company stopped reporting any financial activity as of 2017.

Get Out of Jail Free Card

The investigation by Romanian prosecutors ended with Fiscuci and Simionescu sent to trial for tax evasion, but they may, in the end, escape punishment. Recently one of Dragnea’s parliamentarians passed an anti-graft amendment to the criminal law that states those accused of tax evasion can evade a prison sentence by refunding the money to the state budget.

The Supreme Court further reduced the scope of the case by eliminating more than 500 wiretaps, based on a 2016 decision of the Constitutional Court banning wiretapping done by the Romanian Secret Service for prosecutors. The Romanian judges have not decided whether they will drop the tax evasion case.

This entry was posted by admin on January 31, 2019 at 3:59 pm, and is filed under EVIDENCE. Follow any responses to this post through RSS 2.0. Both comments and pings are currently closed.