« ON A REPORTED SALARY OF ABOUT USD $6,000/MONTH, THE MALAYSIAN PM SPENT MILLIONS ON PERSONAL LUXURY GOODS
IS THE CLINTON FOUNDATION JUST AN INTERNATIONAL MONEY LAUNDERING SCHEME? »

THE POLITICIANS VOTING TO IMPEACH BRAZIL’S PRESIDENT ARE ALSO CORRUPT 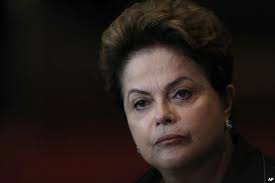 Efforts to impeach Brazil’s president accelerated this month as the country fell into full-blown crisis. But the congressional commission that will help decide Dilma Rousseff‘s fate has its own legal problems.

Of 65 members on the impeachment commission, 37 face charges of corruption or other serious crimes, according to data prepared for the Los Angeles Times by the local organization Transparencia Brasil.

The commission does not represent just the congressional faction that wants Rousseff impeached, but contains members of both the ruling coalition and the opposition.

Of the 513 members of the lower house in Congress, 303 face charges or are being investigated for serious crimes. In the Senate, the same goes for 49 of 81 members.

Moreover, the data do not include any possible repercussions for the newest bombshell in the “Lava Jato,” or “Car Wash,” federal corruption probe. Brazil’s largest construction firm, Odebrecht, announced it would fully cooperate with investigation, and on March 23 the Brazilian Federal Police released a spreadsheet appearing to list payments from the company, whose CEO is currently jailed, to more than 200 politicians.

It’s not yet clear what the legal consequences of this will be, says Transparencia. The group continues to update its database.

Rousseff herself, on the other hand, has never been formally investigated or accused of corruption, though she is enormously unpopular and blamed politically for the country’s deep recessions. She was head of the board of directors at Petrobras, the state-run oil company, when it was involved in the kickback scheme investigators recently uncovered in the Car Wash probe.

But to remove her from office, lawmakers are relying on the accusation that she broke budgetary rules to hide the size of the deficit, and they assert this is an impeachable offense.

The impeachment process was recently accelerated by Eduardo Cunha, speaker of the lower house in Congress, the Chamber of Deputies. The chamber appointed the impeachment commission, and if two-thirds of the chamber votes to impeach, the process moves to the Senate, which would ultimately decide Rousseff’s fate.

If the process gets that far, Rousseff will have plenty of company in Brazil’s legal system. Here are some accusations prominent politicians face in Brazil:

Five members face money laundering charges, six face charges of conspiracy and 19 face charges of accounting irregularities. Thirty-three face either corruption or administrative misconduct charges. In all, 37 members have been charged, some with multiple offenses.

The man who would take over

Michel Temer, the vice president who will take over if Rousseff is impeached, is under suspicion due to claims that emerged in Car Wash investigations that he was involved in an illegal ethanol-purchasing scheme.

Aecio Neves, who narrowly lost to Rousseff in 2014, has been named in Lava Jato investigations and is named in the spreadsheet published last week. Documents obtained during investigations may also indicate his family maintains secret bank accounts in Liechtenstein.

The former mayor of Sao Paulo

Paulo Maluf, who is also a member of the impeachment commission, has been wanted by Interpol, and a court in Paris recently sentenced him in absentia for organized money laundering. This means one of the people helping to decide the course of impeachment here may not be able to leave Brazil, for fear of being arrested outside its borders.

Ministers and members of Congress in Brazil have the right to be tried by the Supreme Court, which is why Rousseff was accused by some of attempting to shield former President Luiz Ignacio Lula da Silva from prison by recently appointing him as her chief of staff. That appointment is still held up in the courts.

As Brazilian Atty. Gen. Jose Cardozo told foreign correspondents at a special news conference March 22, the right to trial by the Supreme Court does not equal immunity, as justices have recently sentenced politicians in other corruption scandals. But these cases often take years to be resolved by Brazil’s highest court.

This entry was posted by admin on March 31, 2016 at 2:16 pm, and is filed under EVIDENCE. Follow any responses to this post through RSS 2.0. Both comments and pings are currently closed.