WHILE CONFLICTING REPORTS ON HOW THE ARREST WAS EXECUTED, it is confirmed USA DEA has El Mini Lic

ABOVE + BELOW – EL MINI LIC 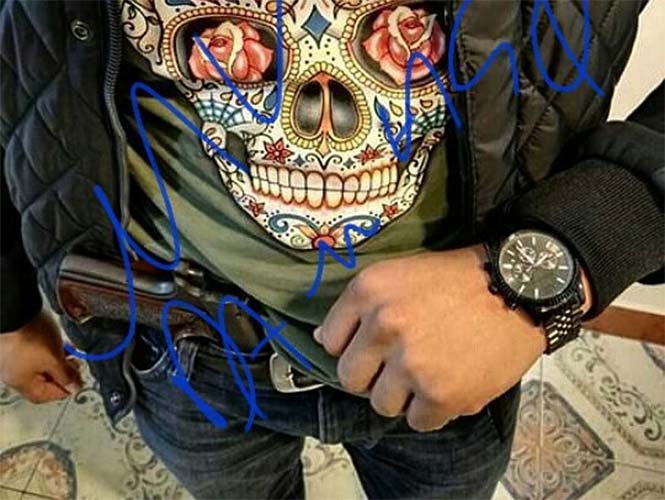 Note: Procesco reports that he had not surrendered, but was arrested trying to cross into Calexico, after hiding in the valleys of Mexicai for days, trying to find the border, and when they discovered his identity, he was taken into custody.
Like others before him, Damaso Lopez Serrano, son of Damaso Lopez, had a good run for awhile, which he documented on his instagram account, luxury cars, guns, buchonas, all the cliches of the narco life, punctuated with the essential peace signs and emojis, and aspirational proverbs.  His cousin El Liebre, was often mistaken for him, through his own social media posts.
It was reported today that he turned himself into DEA officers at the Calexico border crossing, where he had been hiding, presumably in Mexicali for the last several weeks.  It was clear that the Damaso Lopez organization had been more or less wiped out, between the raids in Mexico City, and killings in El Dorado, the Lopez’s home town.  Mini Lic had vanished into rumors and speculation after the arrest of his father.

It was never clear exactly what his sons responsibilities were, if any.  It was said after Joaquin Guzman Loera’s arrest in Mazatlan, that he was to step up and assume a role, other then playboy narco-junior.  He posed for pictures with Mayito Gordo, sometime before his arrest in November 2014.  He moved freely in the Culiacan social scene. His name appeared in narco banners in La Paz, in sloppily written ink, as the bloodshed dripped into the city, fueled by retail drug wars, beginning in 2014.  His father was said to be behind a surge in violence in Baja California Sur, including La Paz, as cells under direction, and not, contested cells said to be under control of Ismael Zambada.

Lopez Serrano, at one point was close with Los Menores, shouting them out on instagram, and through his corridos, but sometime after the initial 2014 arrest of Chapo Guzman, and his subsequent escape and re capture, there was a shift.  It is still unclear who exactly participated in the kidnapping of Los Menores from La Leche, in August 2016, or what the motive was, but it’s clear that Damaso Lopez Sr. was involved.
There had been tensions for months, as disputes being retail sales, and slot machines, in areas south of Culiacan escalated.  Then the kidnapping in August, after the storming of Los Menores grandmothers house in La Tuna.  The kidnapping was humiliating, as video footage leaked, and thousands watched the sons of Chapo Guzman be pushed to the floor, and taken away, in waiting SUV’s, in the sweltering heat.
They were released days later, and recent reports indicate a ransom was paid, as well as the safety of Ruben Osguera Cervantes, El Mencho’s son, Menchito, who was imprisoned in Altiplano.  Rumors ran that Alfredo Beltran’s son, El Mochomito was behind the kidnapping, after he was arrested late last year, in Zapoppan.
The feud between Los Damasos and Los Menores began shortly thereafter, with running gunfights, ambushes, and betrayals, as well as a war fought in the media.  Both sides published letters to various Sinaloa publications accusing the other of betraying them, and Isamel Zambada.  Both sides blamed various killings, including the killing of 5 army soldiers in Culiacan, on the other.
Bodies were dropped from a small plane into El Dorado in April 2017, and confrontations continued, as Los Montanas, the armed wing of Damaso’s tried to keep Los Menores out of their territory.  In May, a video leaked of a bizarre looking Damaso Lopez Sr. eating mariscos and talking, it was said to be filmed by a hacker he had recruited for his media war against Los Menores.
There was an arrest, possibly a killing of his brother, El Pollo, in El Dorado, and then the raid on the Mexico City condo where had been living with his wife.  He looked nothing like the video leaked, which may have been a brother or family member.  Days later his bodyguards were detained, and soon after more of the cell fell in El Dorado.  In Nuevo Leon, a financial operator linked to Damaso Lopez Sr. was executed with two other men outside a bar.
Mini Lic had vanished.  His father was said to be grave fear of his life, and was eager to be extradited to the United States, rather than be murdered in prison.  He is wanted in Virginia on a drug trafficking indictment from 2011.  There are no unsealed indictments charging his son.  It is not even known whether he was actively involved in trafficking across the border, or even whether his father was post 2014, or solely retail sales in Mexico City, Sinaloa, and Southern Baja.
If he has no pending cases, he will solely be turning to the DEA for protection, and to protect himself and his family from the reach of his former friends and family, Ivan and Alfredito Guzman.  He will tell the DEA everything he knows about the inner workings of the Sinaloa Cartel, and expect to live out his life in witness protection.  It is not known what his assets or his fathers were, or if he’s allowed to bring any with him, as La Barbie wanted to, when he was working out a surrender deal in the late 2000’s, with various federal agencies.
Pictures of Mini Lic leaked this year show a slightly heavier man, more family orientated, in family events and gatherings, he looked like a Mexico City junior, carefree and casual.  He finally made his way off instagram, and under the harsh spotlight.  Of course, only to vanish again into the vast resources of the federal government, telling a young lifetime of secrets and stories.

This entry was posted by admin on July 28, 2017 at 8:07 am, and is filed under EVIDENCE. Follow any responses to this post through RSS 2.0. Both comments and pings are currently closed.