« TERRORISM’S DIGITAL SWORD: WHATSAPP CAN’T BAN THE TALIBAN BECAUSE IT CAN’T READ THEIR TEXTS – The Taliban are using the Facebook-owned chat app to spread messages to Afghan citizens as they take over the country
AFGHANISTAN: THE TALIBAN ARE WIDELY HATED IN IRAN. IS SAUDI ARABIA (Sunni Islam) BEHIND THE TALIBAN (Sunni Islam) takeover of Afghanistan, like it was behind the failed ISIS (Sunni Islam) attempted takeover of Iraq, TO CONQUER IRAN (Shia Islam)? » 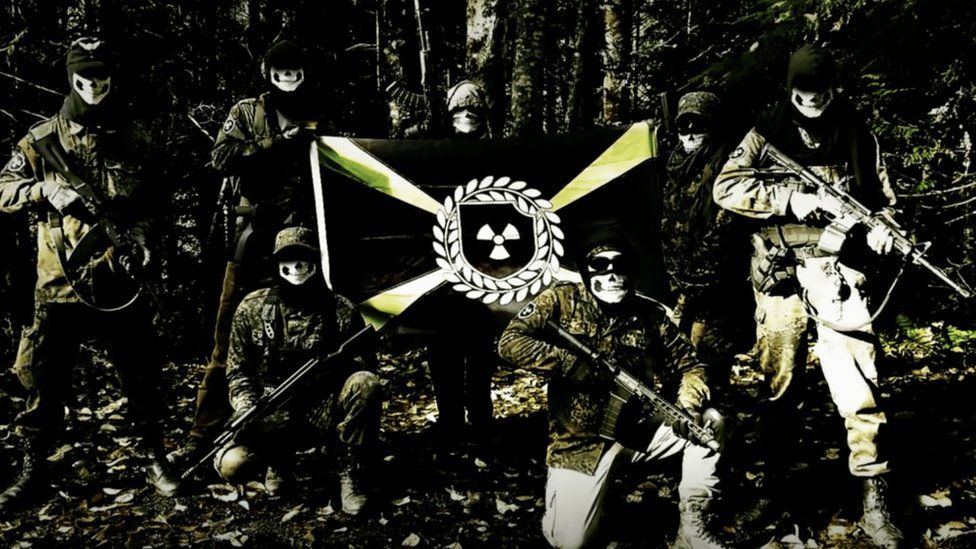 In this 2018 documentary, FRONTLINE and ProPublica investigate a neo-Nazi group that has actively recruited inside the U.S. military.

The Atomwaffen Division (AWD), known as the National Socialist Order (NSO) after July 2020, is an accelerationist neo-Nazi militant organization operating in the United States with affiliates overseas. While much of the world has watched in horror at the swift Taliban takeover of Afghanistan, far-right internet hordes and extremists linked to neo-Nazi terror groups are applauding the fundamentalist insurgents.

“I think Islam is poisonous,” posted an account linked to a former Proud Boys network on Telegram, an encrypted app widely used by the far right. “BUT, these farmers and minimally trained men fought to take their nation back from [world governments]. They took back their national religion as law, and executed dissenters. Hard not to respect that.”

Many of these posts were blatantly antisemitic and celebrated the Taliban’s resistance to a global Jewish cabal, a racist and inaccurate trope commonly cited on Telegram.

“If white men in the West had the same courage as the Taliban, we would not be ruled by Jews currently,” said the same Proud Boys-linked post, viewed close to 2,500 times.

Though several of the posts spread across multiple accounts salute the victory of the Taliban, they are also quick to point out that they hate the Middle East and people of color. But to the far right, whose number one enemy is the United States government and its global network of allies, seeing the “System” (the shorthand word among the far right for world governments) resisted is a victory for their dystopian worldview. It is also clear that the accounts promoting the Taliban victory saw the historical event as a key propaganda victory for the future: This will forever be an example of an American government failure, akin to the fall of Saigon in 1975.

In April, President Joe Biden announced that after a protracted, nearly two-decades war launched after the 9/11 attacks, the U.S. military and its remaining allies would finally withdraw from Afghanistan, leaving the central government to fight it out with the Taliban. Initial intelligence reports warned that the Afghan government could fall within six months after the U.S. left; Taliban forces quickly took over the entire country in recent weeks, culminating in the stunning capture of Kabul over the weekend.

The quick succession of events and the spectacularly incorrect American intelligence forecasts weren’t lost on the extremist right on Telegram.

“To be honest, the Taliban is epic,” said a popular white-nationalist commentator on Telegram, in a post viewed over 2,000 times. “The US had to invade in the early 2000s and stay over 20 years, spending $1 trillion dollars, and dozens of American lives to hold them back. As soon as we left, the Taliban took over the whole country in like 12 hours. LMAO.”

“I celebrate every time the [the U.S. government] is embarrassed. You should too.”

Though Telegram and internet chatter offer a legitimate portal into the pulse of far-right thinking, much of it is also wrapped up in internet troll culture. Far-right activism, especially from the Proud Boys and its adjacent groups, has routinely championed President Joe Biden’s apparent failures to fuel recruitment and strengthen online networks. In this case, the loss of Afghanistan to the Taliban offered both a visually striking embodiment of American policy failure and a concrete example of a disastrous blunder from the latest presidential administration.

(Gavin McInnes was a co-founder of VICE. He left the company in 2008 and has had no involvement since then. He later founded the Proud Boys in 2016.)

A blog linked to members of neo-Nazi terrorist organizations the Atomwaffen Division and the National Socialist Order (NSO) has celebrated figure like al Qaeda leader Osama bin Laden and recently posted a long article applauding the failures of the international coalition and its decade-long war in Afghanistan.

“For those unaware, NATO is pulling out of Afghanistan after 20 years of war with the Taliban and losing,” the blog stated. “This should in fact be celebrated as a victory against the Jewish-controlled world. While the Taliban does have its faults, they are nonetheless a marked enemy of the Jews.”

They continued: “Another reason to celebrate this victory for the Taliban is yet another example that our enemy, this system, is but a paper tiger.”

While the far right celebrates the Taliban, disastrous images have emerged from Kabul: scenes of crowds waiting in line outside embassies for visas that may never arrive, crying families fleeing the city, and hundreds of people chasing a departing U.S. Air Force jet, hoping for safe passage out of Afghanistan.

This entry was posted by admin on August 15, 2021 at 9:00 pm, and is filed under EVIDENCE. Follow any responses to this post through RSS 2.0. Both comments and pings are currently closed.