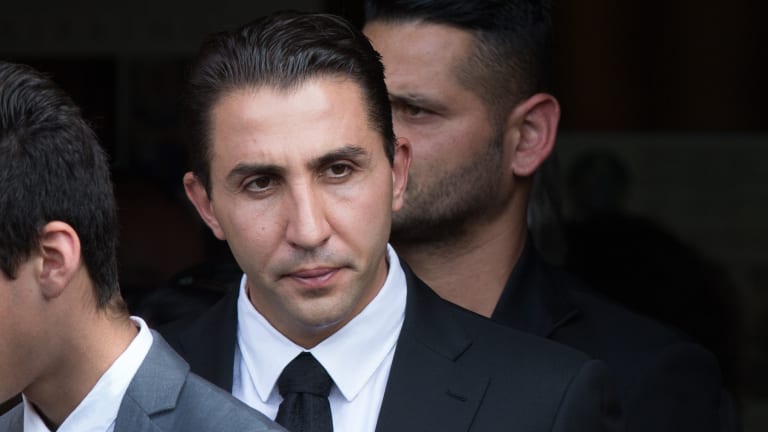 Commonwealth Bank loan officers provided millions of dollars in mortgages to Calabrian mafia kingpin Rocco Arico, who used them to amass a luxury property portfolio and launder cash from his drug and extortion empire.

Employees at three of the big four banks, who were either very compliant or possibly corrupt,  provided the funds to Arico, who is now serving a 14-year jail sentence for extortion, drug trafficking, violence and weapons offences.

The scam came to light during a police sting in 2015. Arico was recorded in a street-corner conversation telling an underworld associate that certain Commonwealth bankers were willing to write up loans even if the borrower had suspect means of income.

“I’ll organise it with the banker,” Arico was recorded telling his mate. “You come in the Commonwealth Bank, we see Hasan* the bank f—ing guy, give your details, sign the documents, to go for the loan and let me worry about it.”

This week, after The Age began asking questions, Commonwealth Bank suspended the employment of both “Hasan” and “Peter”.

The recording on the police wire opened a window into how Arico laundered some of the huge amounts of cash spinning from his lucrative drug business.  It was all about property.

This dirty cash to clean asset operation wasn’t possible without bankers prepared to write up loans while forgoing due diligence – a scenario the banking royal commission has separately suggested was widespread in sections of the CBA’s broker-driven home loan business.

Arico had relied on friendly bankers at the CBA, ANZ and Westpac to write 14 loans – two of them after his arrest on extortion charges. Asset confiscation detectives traced 12 properties comprising a portfolio worth at least $15 million. Another $11 million worth of bricks and mortar had already been sold off and the funds have either never been accounted for, or were transferred to an Italian bank account in the name of a family member.

Five properties are currently frozen as potential proceeds of crime.

Among Arico’s portfolio was a luxury home in Sandringham, an apartment in high-rise Eureka Tower, a bathing box on Safety Beach, a townhouse project and several residential development sites. His  family home in Moonee Ponds was funded by the methamphetamine trade, and so luxurious that police dubbed it the “Ice Castle”.

Peter, whose real name can’t be used for legal reasons, provided Arico a mortgage for his Moonee Ponds palace just a day after Arico was arrested on charges of extortion in 2015. The loan was in the name of an Arico relative, who at the time was not working and was suffering from a serious illness.

Arico’s property wealth was amassed between 2008, when he was released from prison having served sentences for attempted murder and kidnapping, and 2015.

The loans were secured with the help of remarkably compliant and possibly corrupt bank staff. The Commonwealth Bank was favoured, and this week, after Fairfax Media began making queries, both CBA staffers Hasan and Peter were suspended.

Rocco Arico, 39, was the gangster from central casting. Suspected of arranging the prison murder of gangland boss Carl Williams and having ties to the Calabrian mafia, known as ‘Ndrangheta, Arico was sentenced last year to 14 more years prison for extortion, drug trafficking, violence and weapons offences.

Prior to that, he could help his friends get access to a banking system not only vulnerable to exploitation, but with at least a small number of staff that encouraged it. The recorded conversation suggests Arico had forged close ties to bank insiders.

“If you’re fair dinkum about getting a loan, you come to my banker and I’ll get you the loan,” Arico said to a fellow drug trafficker, who was being pressured to take out a loan in his wife’s name to pay off a drug debt he owed Arico.

“Of course I’m going to come [with you] to the bank,” Arico explained . “Otherwise he’s [the CBA staffer] not going to do nothing for you.”

When this conversation was recorded, Arico had already emerged as a major player in Melbourne’s drug trade, topping a law enforcement list of the most influential crime figures.

Arico’s ability to tap into personal mortgage finance sits at the extreme end of a banking business model that has been subject to intense royal commission scrutiny since hearings began this month.

Among the things being examined is a culture that values outcomes over ethics, and which allegedly allowed, in a separate case, the CBA to facilitate wide scale money laundering via its cash deposit ATM facilities.

The royal commission has heard evidence that the banks sought to aggressively expand their loan books and often used mortgage brokers for the rougher end of the market. They were given incentives by banks to sign up borrowers less able able to repay loans than those who dealt directly with the bank, ultimately exposing consumers and the banks to risk.

Arico’s interactions with the CBA were with a small number of full-time staff rather than mortgage brokers, but it was underpinned by the same cavalier attitude to oversight.

Sources have told Fairfax Media that Arico’s operation involved him getting a loan to buy a property, sometimes based on false documentation or in the absence of evidence that he had a legitimate means of repayment. The loans were in the name of Arico himself, or family members, whose main source of income appeared to be a cafe in Lygon Street’s Little Italy precinct in Carlton.

Then the drug trafficker would renovate, refurbish or develop the property, pouring in sometimes millions of dirty dollars to buy top-line fixtures and European appliances, paying tradesmen in cash, making it hard for authorities to track his spending. One beachside property was equipped with a $75,000 sculptural glass elevator.

Renovation complete, and house value raised, Arico would sell the house, pay out the loan and keep the increase in value – on its face, perfectly clean money.

Arico’s CBA dealings, while unknown to the royal commission until contacted by Fairfax Media, nevertheless underscore a key focus of the Turnbull government commissioned inquiry: the inability of banks to confront and air their dirty laundry.

In NSW, policing agencies are examining how notorious crime syndicates, including Australia’s most infamous underworld family, have been able to access home loan after home loan, despite their infamy and absence of legitimate income.

In a case recently scrutinised by police, a criminal syndicate bought outright a now defunct NSW-based franchise of the Bank of Queensland to facilitate money laundering.

Of the four bankers Arico is suspected of cultivating to write him and his associates home loans, one was pushed out of the bank when the CBA’s internal investigators uncovered fraudulent deals with Arico as far back as 2011.

But evidence suggests Arico quickly replaced him with others, including the two bankers suspended this week.

The bank waited until 2016 (after Arico was charged) to brief investigators from the police anti-gang taskforce, Purana, but has, since then, provided limited assistance.

CBA would also not say if the issue had been disclosed to the Kenneth Hayne led royal commission, which has been agitating that the banks to disclose suspected wrongdoing despite resistance from CBA.

“We strive to cooperate with all law enforcement agencies regarding concerns about customers or staff and are committed to assisting with all enquiries or investigations,” a spokesman said.

Of the bank’s suspension this week of Hasan and Peter, the spokesman said that: ”new evidence has been brought to our attention and we have now launched an internal investigation.”

“Two employees have been stood down from their current duties while the investigation is underway. We continue to cooperate with Victorian Police.”

Arico was also adept at securing loans from other banks. Westpac underwrote two properties bought by the Arico family in 2012, one of which has since been sold while the other is the subject of a freezing order.

“Westpac does not have a banking relationship with this customer or his business,” a spokeswoman for the bank said.

The ANZ wrote three mortgages for Arico’s family, including refinancing the CBA loan on the “ice castle” nearly a year after Arico’s arrest on extortion and drug trafficking charges and in the wake of a blaze in publicity about his position as an underworld crime boss. The home is now frozen as the suspected proceeds of crime.

Neither Westpac nor ANZ was willing to comment on whether it had contacted law enforcement authorities about potential impropriety by Arico or its staff.

“While we are unable to comment on individual customers, we take our regulatory obligations seriously as well as any requests we receive from relevant authorities,” an ANZ spokesman said.

Arico’s solicitor, Anthony Condello, did not respond to a request for comment on behalf of his client. The royal commission, meanwhile, is turning its focus to financial planning and wealth management when it resumes hearings in mid-April.

This entry was posted by admin on March 31, 2018 at 7:00 pm, and is filed under EVIDENCE. Follow any responses to this post through RSS 2.0. Both comments and pings are currently closed.