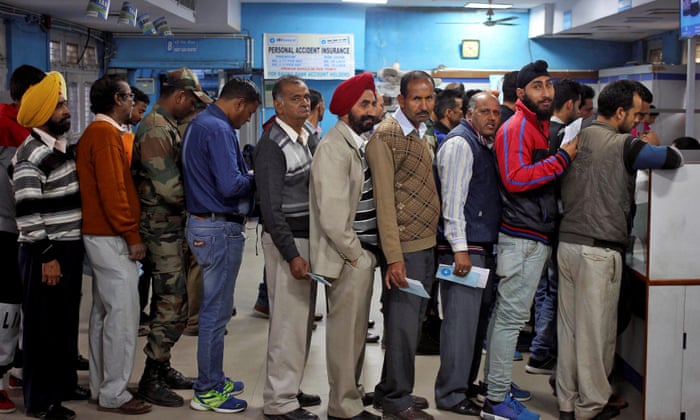 As reported yesterday, India’s unexpected crackdown on “black money” which saw the elimination of the old high denomination bills, is not going well, not only because former PM Manmohan Singh slammed the idea warning it would cut as much as 2% from the GDP of the world’s fastest growing economy, but because so far the voluntary participation in the “exchange” of old for new notes ahead of today’s exchange suspension (deposits of old cash may still take place until December 31) has been far below expectations.

As a result, the government is taking even more aggressive steps to part savers with their allegedly “laundered” cash, and as the Indian Express reports, Mody’s cabinet discussed amending laws to levy close to 60% income tax on unaccounted deposits in banks above a threshold post demonetisation of high-denomination currency notes. “The move comes amid banks reporting over Rs 21,000 crore being deposited in zero-balance Jan Dhan accounts in two weeks after the 500 and 1,000 rupee notes were banned, which authorities apprehend may be the laundered black money.”

IE sources said the government was keen to tax all unaccounted money deposited in bank accounts after it allowed the banned currency to be deposited in bank accounts during a 50-day window from November 10 to December 30. The Indian paper adds that there was no official briefing on what transpired in the meeting that was called at short notice as Parliament is in session, further suggesting that the Modi government is indeed panicking, and scrambling to come up with legislation on the fly to demonetize India’s mostly-cash rich population.

There have been various statements on behalf of the government ever since the demonetisation scheme was announced on November 8, which has led to fears of the taxman coming down heavily on suspicious deposits that could be made to launder blackmoney.

Officials have even talked of a 30 per cent tax plus a 200 per cent penalty on top of a possible prosecution in cases where blackmoney holders took advantage of the 50-day window for depositing the banned currency.

Reprotedly, in the government’s scramble to sequester cash, the government plans to bring an amendment to the Income Tax Act during the current winter session of Parliament to levy a tax that will be higher than 45 per cent tax and penalty charged on blackmoney disclosed in the one-time Income Disclosure Scheme that ended on September 30. As for those blackmoney holders who did not utilise the window, they would be charged a higher rate which could be close to 60 per cent that the foreign blackmoney holder had paid last year.

Recall, that as per our report last night, one of the reasons proposed for the recent tumble in gold has been speculation that India may ban gold imports. As a reminder, gold has traditionally been a widely-accepted cash alternative in an economy where gold has long held a supremacy over cash equivalents, to the point where recently the government started paying a dividend to those who deposit their gold to local banks for “safe keeping.”

Well, it now appears that the government is taking its crusade against gold one step futher, and according to a report by NewsRise, the Indian government may soon impose curbs on domestic holdings of gold as Modi intensifies his war against “black money”, news agency NewsRise reported.

As we reported previously, gold prices have soared in India ever since the November 8 demonetization announcement, and premiums jumped to two-year highs last week as jewellers ramped up purchases on fears the government might restrict imports after withdrawing higher-denomination notes from circulation in its fight against black money.

India is the world’s second biggest gold buyer, and it is estimated that one-third of its annual demand of up to 1,000 tonnes is paid for in black money – untaxed funds held in secret by citizens in cash that don’t appear in any official accounts.

The move to withdraw higher denomination notes has already started to disrupt cash-based gold smuggling, officials have said.  Scrap gold supplies were also set to halve this quarter as the cash crunch and falling prices make it difficult for consumers to liquidate their holdings.

If the past is any indication, such escalations by the government will only make it even more attractive for the local population to hold gold as a safe “alternative” to cash, which as the past month has shown can be stripped of its value overnight, and will ultimately lead to even greater gold smuggling by the local population, resulting in another spike in the current account deficit, something which has plagued previous administrations, who have repeatedly looked for ways to prevent hot money outflows from the Indian economy.

This entry was posted by admin on November 29, 2016 at 5:19 pm, and is filed under EVIDENCE. Follow any responses to this post through RSS 2.0. Both comments and pings are currently closed.