Amid a 10-year crackdown on cartels, the drug trade continues and factions have splintered – leaving Sinaloa and CJNG facing off in Colima state

Standing guard at the scene of the crime, the two police officers surveyed the shattered glass and bullet-pocked bodywork of the Mercedes Benz hatchback and offered their analysis.
“It’s an eye for an eye,” said one, repeating a phrase often heard in this coastal city, about 200 miles south-west of Guadalajara. “It’s two groups getting even with each other.”
As the officers spoke, a group of children kicked a football just beyond the yellow crime scene tape, and customers wandered unperturbed in and out of a row of shops.
Only an hour before gunmen on a motorcycle had opened fire on the car which crashed into the side of a health clinic; miraculously the two occupants survived.
Manzanillo and the surrounding state of Colima were once best known for their black sand beaches, lime groves and a smoldering volcano that erupts every century or so.
Over the past year, however, the region has claimed a new title: murder capital of Mexico. According to federal figures, Colima registered 434 homicides in the first nine months of 2016 – a huge number in a population of just 700,000.

Local officials blame the killings on outsiders or describe it as score-settling between petty criminals.
But analysts of the drug war say the violence is part of a nationwide realignment of organized crime – and a bitter struggle to control the port of Manzanillo, one of the biggest on Mexico’s Pacific coast.
Ten years of a militarised campaign against the cartels has not ended the trade in drugs, or helped enforce rule of law in Mexico. It has, however, weakened or splintered several crime factions, leaving a handful of powerful survivors fighting for the spoils.
Colima is currently the setting for a confrontation between two of the most formidable: the Sinaloa Federation – led by imprisoned capo Joaquín “El Chapo” Guzmán – and the Jalisco New Generation cartel, known by its Spanish initials as the CJNG.
“Most of the [Mexican] cartels have been weakened,” said Mike Vigil, a former Drug Enforcement Administration agent who worked undercover in Mexico. “The only two powerful cartels left are Sinaloa and the CJNG.
The CJNG – based in the neighbouring state of Jalisco – has already established a reputation as one of the country’s fastest-growing and most aggressive groups, willing to confront both rivals in the underworld and federal forces.
It emerged in 2010 following a fight for the spoils of a prominent Sinaloa cartel boss, Nacho Coronel, who was killed by the army, and for the past five years or so it has used Manzanillo to import chemical precursors from Asia for the production of methamphetamines.
Last year, while Guzmán was still on the run after escaping from a high-security jail, Sinaloa made a move on Colima.
The cartel publicly announced its arrival in October 2015, with a narcocorrido song and a Facebook message entitled “Sinaloa is now in Colima”. The message heralded the launch of “Operation Cleanup”, striking a familiar tone in Mexico, where criminal groups try to cloak their activities in the language of social activism.
But within months, Guzmán was recaptured; and with El Chapo currently awaiting extradition to the US, a violent rearrangement of the underworld appears under way – and Colima is one of its principle battlegrounds. The conflict between the cartels burst into the open this summer in a confusing episode when six men – including Guzmán’s son Jesús Alfredo Guzmán – were kidnapped from a restaurant in Puerto Vallarta, Jalisco.
Authorities blamed the abduction on the CJNG, suggesting that the upstart cartel was trying to take advantage of Guzmán’s imprisonment.
But Guzmán was later reportedly released, and observers say that the reports that Sinaloa has been weakened by El Chapo’s arrest may well prove premature.
“The CJNG is gaining ground, but doesn’t have anywhere near the power of the Sinaloa cartel,” said Miguel Ángel Vega, a reporter with the Sinaloa-based news organization Ríodoce.
Vega said the cartel was well entrenched – both in the rugged Sierras where it produces heroin, marijuana and methamphetamines, and in the corridors of power, where it maintains connections at all levels of government.
“The Sinaloa cartel is not just El Chapo,” he said.
The CJNG has also demonstrated a capacity to corrupt officials: a recording surfaced in September in which a cowed police chief can be heard taking orders from the group’s boss, Nemesio Oseguera Cervantes, AKA “El Mencho”.
Under El Mencho – himself a former police officer – the CJNG has made violence its calling card. The group launched itself on the national stage in 2011 by dumping 35 bodies under a bridge in the Atlantic coast state of Veracruz; at the time, the group called itself the Zeta-killers, and professed to be targeting the powerful Zetas cartel. 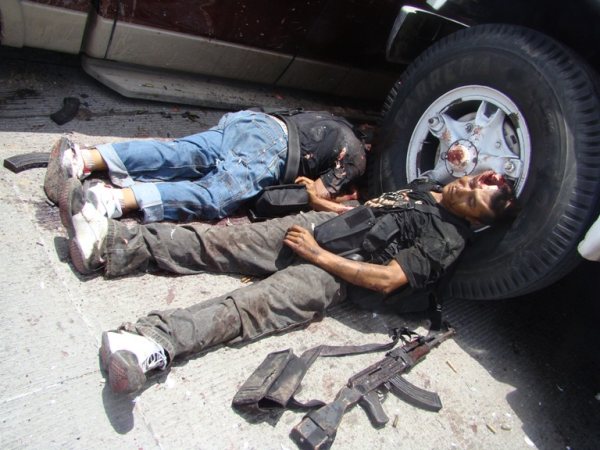 But the CJNG also showed itself willing to take on the Mexican state.
As federal forces closed in on El Mencho in May 2015, the CJNG launched a coordinated show of strength across Jalisco and neighbouring regions, blocking dozens of roads with hijacked vehicles and setting banks and petrol stations on fire.
In 2015, CJNG gunmen ambushed a police convoy, killing 15 officers in the single bloodiest attack on Mexican security forces in recent history, and shot down an army helicopter.

The cartel has also been implicated in a string of vigilante attacks on petty criminals in Jalisco – including six people who were recently found with their hands chopped off – and a string of attacks on state officials, including the murders of the tourism secretary and a federal lawmaker.

Colima state officials did not respond to interview requests, though they have previously attempted to downplay talk of a cartel war.
State prosecutor Felipe de Jesús Muñoz Vázquez told local media in August that 90% of homicides were related to organized crime – with 85 of those slayings explained by low-level drug dealing.
And despite the spiraling murder rate, local people in the state capital also seem at pains to insist that the situation is in hand.
“There’s no panic on the streets here,” said Miguel Ángel Vargas, news director of radio station Ángel Guardian, adding that people in Colima city worried about personal finances and local issues such as corruption and spending cuts.
Authorities in Manzanillo also insist their city is safe, even though an analysis by the news organization Animal Politico ranked it as the third-most violent municipality in the country – trailing only Acapulco and Tecomán, another Colima municipality – with 103.87 homicides per 100,000 residents.
“Up until now, we have not found innocent people mixed up in these events,” said Manzanillo police chief Miguel Ángel García, a retired vice-admiral, repeating a refrain heard often in Mexico.
Local journalists say that much of the violence stems from the lack of a strong boss to control the “plaza” – the local turf or trafficking routes. Others suggested that the conflict was triggered by defections from CJNG to Sinaloa.
“It’s a war over the local market,” said one longtime reporter, asking for anonymity for security reasons. “Cartel de Jalisco sells ice [methamphetamine], while Sinaloa sells cocaine.”
But few local residents expect either side to win a victory by force – they believe that the solution will come from a political deal.
Some believe the violence will continue until one of the cartels gains control with help from the government, noting the Sinaloa cartel’s arrival in a state with a strong CJNG presence at the same time as a change in the governor’s office.
“There’s no ‘pacto’” in Colima, one of the journalists said, referring to an arrangement between authorities and one of the cartels. “It won’t calm down here until there is.” This entry was posted by admin on November 29, 2016 at 12:19 pm, and is filed under EVIDENCE. Follow any responses to this post through RSS 2.0. Both comments and pings are currently closed.