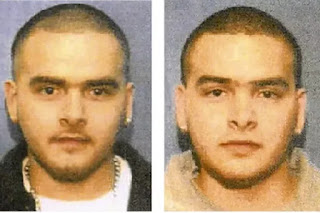 Pedro Flores, aka: Peter Flores (left) and his twin brother Margarito Flores, aka: Jay Flores once Chicago’s biggest drug traffickers, rose from street-level Chicago drug dealers to the top of the cartel world — and, when they got caught, helped bring down Joaquin “El Chapo” Guzman Loera, the Mexican drug kingpin who headed the Sinaloa Cartel.

At their sentencing in 2015, a federal judge told the brothers they’d always have to worry about being hunted down by cartel hit men after cooperating with prosecutors against Sinaloa drug kingpin Joaquin ‘El Chapo’ Guzman Loera.

The wives of the Flores brothers — the most significant drug informants in U.S. history — have been named as defendants in a money-laundering case in Chicago, according to federal prosecutors. Their husbands are Pedro and Margarito Flores, known as the Twins, who were each sentenced to 14 years in prison for their roles in international drug trafficking.

The charges allege that, after the Twins surrendered to authorities in December 2008, the two women and others spent the next dozen years hiding drug money at multiple locations — including a home in Chicago and another in Texas — and spent it on themselves and the imprisoned brothers.

“These two nitwits have played innocent for years now and they were very much involved in the movement and hiding of money,” Jack Riley, the former head of the U.S. Drug Enforcement Administration’s office in Chicago, said of the Twins’ wives. “We knew that early on, but it was very difficult to prove.”

Riley says the women have betrayed the U.S. government, which got them out of Mexico after their husbands agreed to cooperate with prosecutors here against Sinaloa cartel kingpin Joaquin “El Chapo” Guzman Loera.

“We bent over backwards, more so than I have ever seen, to safeguard them and get them out of Mexico,” Riley said of the women and their family members.

Also charged are Armando Flores, 52, of Texas; Laura Lopez, 58, of Chicago; and Bianca Finnigan, 32, of Sycamore northwest of Chicago.

The Chicago Sun-Times reported earlier this year that Pedro and Margarito Flores were once again under federal investigation. That news came six years after a federal judge in Chicago rewarded them with relatively light 14-year prison sentences in exchange for their extraordinary cooperation against Guzman.

The Flores brothers have admitted they smuggled at least 1,500 kilograms of Sinaloa cartel cocaine into the United States every month between 2005 and 2008. And, according to their guilty pleas, they sent more than $930 million in “bulk cash” back to the cartel in Mexico.

A court filing last year revealed that “the government no longer holds the view that all recoverable proceeds were turned over to the government.”

The women previously published a book, “Cartel Wives,” in which they wrote under pseudonyms and described having had access to unimaginable riches in Mexico. They said the Twins showered them with red roses by the dozens, 10-carat diamond wedding rings and getaways at luxury resorts in Puerto Vallarta.

They lived in a mountaintop estate with a private zoo including horses, monkeys and a tiger cub.

In the book, the wives said their husbands amassed a fortune made of “dirty money with a trail of bodies behind it.”

CHICAGO — An indictment unsealed today in federal court charges five defendants with conspiring to launder illicit drug proceeds in Chicago for more than a decade.

The indictment was returned June 9, 2021, in U.S. District Court in Chicago, and ordered unsealed today.  Initial court appearances for Laura Lopez and Finnigan are scheduled to occur telephonically today at 3:00 p.m. before U.S. Magistrate Judge Jeffrey T. Gilbert in Chicago.  Vivianna Lopez, Gaytan, and Armando Flores were arrested today outside of the Northern District of Illinois.  Their initial court appearances in other federal district courts will be held at times to be determined.

According to the indictment, the defendants laundered drug trafficking proceeds generated by the husbands of Vivianna Lopez and Gaytan.  The husbands surrendered to federal authorities in December 2008 and were incarcerated by the U.S. Bureau of Prisons, the indictment states.  For the next 12 years, the defendants maintained portions of the drug proceeds at multiple locations, including Laura Lopez’s residence in Chicago and Armando Flores’s residence in Texas, and used the money for the benefit of themselves, the incarcerated husbands, and others, the indictment states.  The conspirators allegedly laundered the money through the use of currency exchanges, credit cards, money orders, gift cards, U.S. mail deliveries, and other means.

The indictment seeks forfeiture from Vivianna Lopez and Gaytan in the amount of $504,858.

The public is reminded that an indictment is not evidence of guilt.  The defendants are presumed innocent and entitled to a fair trial at which the government has the burden of proving guilt beyond a reasonable doubt.  If convicted, the Court must impose reasonable sentences under federal statutes and the advisory U.S. Sentencing Guidelines.

https://www.yahoo.com/now/wives-chicago-twins-cooperated-against-025500205.htmlThe wives of Chicago twins Pedro and Margarito Flores, who cooperated against Sinaloa cartel kingpin Joaquin “El Chapo” Guzman, were arrested Tuesday on money laundering charges alleging they helped hide and spend hundreds of thousands of dollars of their husbands’ drug proceeds over more than a decade.

Also charged in the money laundering conspiracy were the twins’ older brother, Armando Flores, 52, of Round Rock, Texas; Laura Lopez, 58, of Chicago; and Bianca Finnigan, 32, of Sycamore, Illinois, who is the sister of Vivianna Lopez.

According to the indictment, the defendants laundered drug trafficking proceeds generated by the Flores twins, West Side drug traffickers whose decision to cooperate with federal authorities in 2008 led to arguably the biggest drug case ever brought in Chicago, with charges against El Chapo himself as well as many of his top underbosses.

The Flores twins were sentenced in 2015 to 14 years in prison and were released late last year into witness protection. It’s unclear where their wives were arrested or where they would appear in court.

Laura Lopez and Finnigan appeared before a magistrate judge in Chicago on Tuesday afternoon where they each entered not guilty pleas.

Sources said Finnigan is the sister-in-law of corrupt former Chicago cop Jerome Finnigan, who was sentenced to prison in 2011 for leading a rogue group of cops in the department’s elite Special Operations Section.

Court information for Armando Flores was not immediately available.

The Flores’ wives are both the daughters of Chicago police officers and grew up in the city. Valerie Gaytan, Margarito Flores’ wife, was previously married to Latin Kings gang leader Rudy “Kato” Rangel, who was murdered at a West Side barbershop nearly two decades ago.

After the Flores twins were sentenced, the wives wrote a tell-all book called “Cartel Wives” detailing the highs and lows of being married to drug-kingpins-turned-cartel-informants.

A description of the book on Amazon.com said both wives are now living under assumed names because of the dangers posed by their husbands’ cooperation.

“To their neighbors, they are just single mothers, soccer moms, and members of the PTA,” the description reads. “But their personal stories could inspire the most terrifying and dramatic crime films and narco telenovelas being produced today.”

According to the nine-count indictment, the Flores’ wives maintained portions of their husbands’ drug proceeds at multiple locations over the course of more than 12 years, including Laura Lopez’s residence in Chicago and Armando Flores’ residence in Texas, and used the money for the benefit of themselves, the incarcerated husbands, and others.

The conspirators allegedly laundered the money through the use of currency exchanges, credit cards, money orders, gift cards, U.S. mail deliveries and other means, according to the U.S. attorney’s office.

The charges allege the wives spent more than $165,000 in drug money on private school tuition for their children, $100,000 in international and domestic travel, $80,000 for Vivianna Lopez’s rent, and $11,000 in child support for one of their husband’s kids.

One of the wives also spent $31,000 of laundered drug money on her laundry business, the indictment alleged.

The indictment seeks forfeiture from Vivianna Lopez and Gaytan in the amount of $504,858.

Records show that as part of their unprecedented deal with federal authorities, the Flores twins forfeited about $4 million in drug proceeds to the government. During their cooperation, one of the twins drew the ire of prosecutors for purchasing a luxury vehicle for his wife, but their deal remained intact.

When U.S. District Chief Judge Ruben Castillo sentenced the twins in 2015, prosecutors said they were satisfied that no other proceeds remained hidden. The judge went along with the deal not to impose a fine on the brothers, even though he was clearly skeptical.

That changed last year, however, when the twins asked to be released from prison early due to the COVID-19 pandemic that was ravaging the federal prison population. In a motion last fall, prosecutors wrote, “the government no longer holds the view that all recoverable proceeds were turned over.”

Born and raised in Chicago’s Little Village neighborhood, the Flores’ rise in the narcotics world was due in part because of their older brother, Armando, who was arrested in Chicago in 1998 on federal narcotics charges after selling drugs out of a Cicero car dealership. When he went to prison, the twins stepped in and started selling themselves, eventually growing the business to supply buyers in Milwaukee with multikilo loads of cocaine.

The twins built their drug empire using a system of couriers and henchmen whom they trusted to drive loads in vehicles outfitted with secret compartments and hydraulic trapdoors, court records show.

The drugs were often picked up in broad daylight, in supermarket parking lots and outside of South Loop dollar stores, and then kept in innocuous-looking stash houses from Chicago to Aurora.

Their main supplier was Guzman, whose vast operations included a fleet of 747 jets that had all the seats removed, the brothers said in sworn statements to a grand jury. The brothers said Guzman’s lieutenants helped the cartel coordinate shipments of cocaine from Colombia to Mexico using submarines, speedboats and amphibious vessels to avoid law enforcement.

After they agreed to flip, the brothers recorded phone calls and meetings with Guzman himself talking about massive shipments of drugs. The U.S. government helped the Flores brothers quietly leave Mexico in 2008, giving their immediate family members new identities and setting them up with $300,000 to pay for living expenses.

In December 2018, Pedro Flores testified in the landmark trial against Guzman in New York, where prosecutors played phone calls that were crucial in the federal effort against the drug lord. On one call, jurors heard Guzman’s own voice greeting Flores with “Amigo!” and discussing a price break on a shipment of heroin destined for Chicago.

Guzman was convicted and sentenced to life in prison.

This entry was posted by admin on June 15, 2021 at 8:00 am, and is filed under EVIDENCE. Follow any responses to this post through RSS 2.0. Both comments and pings are currently closed.