« CHINA: Committee on the Present Danger from China
CHINA’S CRIMES AGAINST HUMANITY (Falun Gong) they don’t want you to hear » 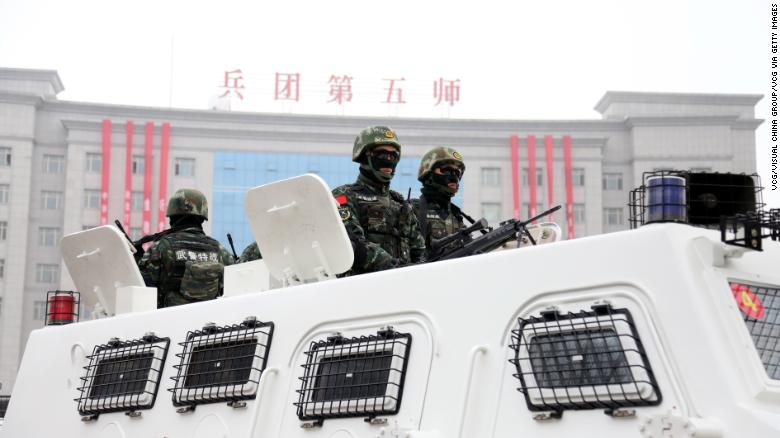 Soldiers and paramilitary police patrol during a pep rally for an anti-terrorism and maintaining stability rally in Xinjiang in March 2017.

I first visited Xinjiang, in northwest China, in July 2009, returning to Beijing only days before demonstrations in the region’s capital, Urumqi, turned deadly.

Police responded to the violence with a massive crackdown, and detentions or disappearances ranged into the thousands. To control the spread of information, internet access to all of Xinjiang was cut off for around 10 months.
Since then, China’s persecution of Uyghurs, a Turkic-speaking Muslim minority who form a bare majority in Xinjiang, has intensified, accelerating in particular since 2016 with a change in Party leadership in the region.
While violent resistance has been episodic, and should be denounced, the Chinese authorities have suppressed even peaceful expression of Uyghur rights, most notably the 2014 life sentence handed down to Uyghur intellectual Ilham Tohti on the absurd charge of separatism.
Despite the increasingly dire human rights situation in Xinjiang, few around the world are aware of it, and even fewer have spoken out. We are now reaching a crisis point, when speaking out is not enough.
The persecution must be called by its true name, and measures taken accordingly.
Chinese officials in Xinjiang have previously said they protect the “legitimate rights and interests of all ethnicities and prohibit the discrimination and oppression against any ethnic groups.” Beijing also denies arbitrarily arresting or detaining citizens based on ethnicity or religion, saying its actions in Xinjiang are related to counter terrorism and anti-extremism.

The concept of crimes against humanity originated in the 18th century, denouncing the atrocities of slavery and colonialism, and entered international law after World War II. Today, the 1998 Rome Statute of the International Criminal Court provides the most thorough definition.
The statute lists 11 acts, which when widespread or systematic, may rise to the level of crimes against humanity. These include: the forcible transfer of populations; arbitrary imprisonment; torture, the persecution of ethnic, cultural or religious groups; enforced disappearances; and apartheid, the institutionalized systematic oppression and domination by one racial group over others.
Unlike war crimes, crimes against humanity can be committed during peace time, but the idea that victims live in peace is only a callous technicality.
The situation that is unfolding in Xinjiang, I would argue, fits the textbook definition of crimes against humanity. 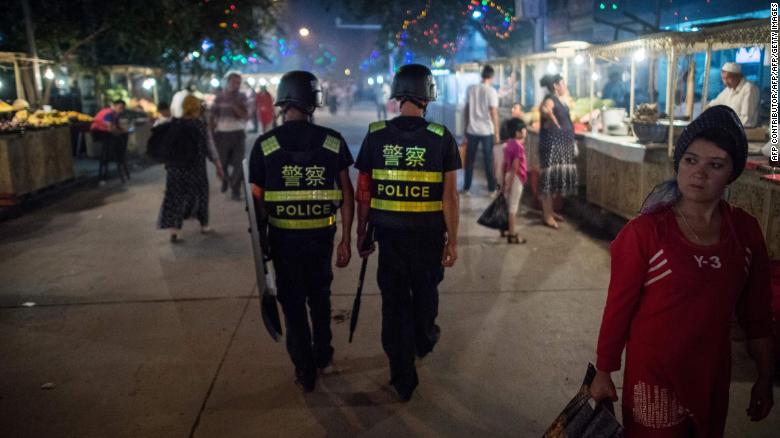 Police patrol in a night food market near the Id Kah Mosque in Kashgar in China’s Xinjiang Uighur Autonomous Region.

Uyghurs in Xinjiang and elsewhere in China face systematic persecution.
With Islam a fundamental part of the Uyghur identity, so-called counter-terrorism campaigns which have cracked down hard on Muslim practices and increasingly criminalized Islam, are tantamount to the criminalization of being Uyghur.
This has reportedly included the banning dozens of Uyghur names, with violators at risk of not having their children’s births registered; to forcing Uyghurs to denounce core tenets of their religion. Parents caught teaching their children about Islam risk detention or having their offspring taken away.
According to new research by New York-based Chinese Human Rights Defenders, in 2017 criminal arrests in Xinjiang accounted for a shocking 21% of all national arrests, even though the region’s population is only 1.5% of China’s total. In prison, according to state media, so-called “religious extremists” euphemistically undergo thought rectification.
As in apartheid South Africa, checkpoints and restrictions on movement are a fact of daily life for Uyghurs.
Armed police scan IDs, checking biometric and personal data. Religiosity, having relatives abroad, or simply being Uyghur increase the chances of being detained, as do the contents of a person’s phone or computer.
Since 2015, as I have reported for the London-based Minority Rights Group, Uyghurs have had to obtain permission to visit relatives or seek medical treatment outside their hometowns, and passports started being recalled. Increasingly, the threat of detention and concerns over surveillance make contact between distant family members impossible. 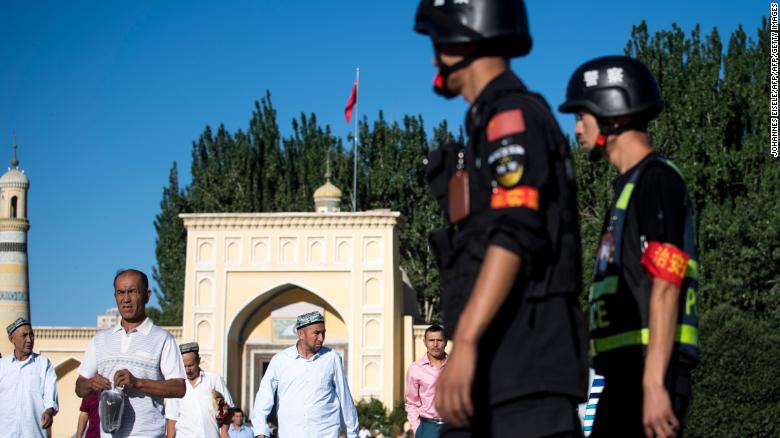 Police patrol as Muslims leave the Id Kah Mosque after the morning prayer on Eid al-Fitr in 2017 in the old town of Kashgar in China’s Xinjiang Uighur Autonomous Region.

Nowhere are the signs of crimes against humanity more alarming than in the expanding system of concentration camps which observers have said are springing up across Xinjiang.

While the government officially denies the camps exist, in July state media reported authorities admitted to having transferred some 460,000 Uyghurs for “vocational training,” as part of a bid to “to improve social stability and alleviate poverty.”
Evidence suggests as many as one million Uyghurs and other Muslims are interned across Xinjiang in “re-education centers,” around 10% of the population.
What little is known about what happens inside points to systematic physical and psychological torture, and indoctrination. One former detainee said she was not allowed to wear underwear and her head was shaved, while another described having tried to commit suicide by bashing his skull against a wall. Many simply disappear.
Meanwhile, so-called “becoming family” and “home stay” policies force Uyghur families to accept Communist Party officials into their homes to observe and report on their behavior. Imagine a family member has been taken away and now you are forced to host their abductor, quite possibly in the same room left empty by their disappearance.
Children whose parents have been detained are transferred to state custody, where, by some accounts, “they are locked up like farm animals” in so-called orphanages.

Awareness of crimes against Uyghurs is only barely beginning to attract the level of attention demanded by their severity.
Journalists, diplomats and others who speak out about Xinjiang should at least acknowledge the appearance of ongoing crimes against humanity.
The international community must demand an independent and effective commission of inquiry into the probable crimes against humanity in Xinjiang.
This week, US lawmakers are holding hearings on the “arbitrary detention, torture, (and) egregious restrictions on religious practice and culture” in Xinjiang.
Under the Global Magnitsky Human Rights Accountability Act, according to Human Rights Watch, Washington can “impose visa bans and targeted sanctions on individuals anywhere in the world responsible for committing human rights violations or acts of significant corruption.”
Those who bear responsibility for the dire situation in Xinjiang must be held responsible.

This entry was posted by admin on April 30, 2020 at 5:59 pm, and is filed under EVIDENCE. Follow any responses to this post through RSS 2.0. Both comments and pings are currently closed.