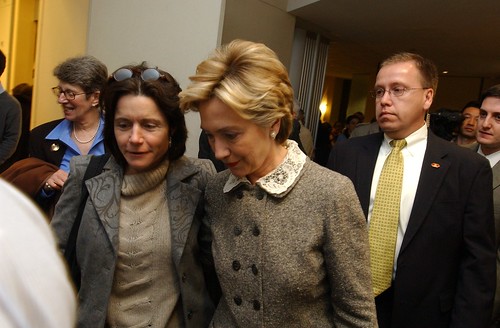 Brooke Shearer, a former journalist and personal aide to Hillary Rodham Clinton who had directed the White House Fellows program and served in the Interior Department, has died. She was 58.

Shearer, who had cancer, died May 19 at her home in Washington, D.C., her family said.

She was married to Strobe Talbott, a high-ranking State Department official in the Clinton White House who heads the Brookings Institution research and policy center in Washington.

The couple’s lives and careers were intertwined with those of President Clinton, whom Talbott roomed with at Oxford University in the early 1970s. Shearer became close to Clinton’s wife, Hillary, now the secretary of State.

During the 1992 presidential campaign, she was Hillary Clinton’s personal aide or “friend, advisor, short-order cook,” as the irreverent Shearer once put it.

In 2001, she was named founding director of the Yale World Fellows program, which recruits young world leaders to study at Yale University.

Subsequently, Shearer was involved in fundraising for the National Archives and groups that support reconstruction work in Afghanistan and bring HIV/AIDS education and medicine to women in developing countries.

Brooke Lloyd Shearer and her twin brother, Cody, were born July 28, 1950, in Culver City and grew up in Los Angeles. Her twin also became a journalist and investigator.

In 1971, Shearer earned a bachelor’s degree in English and history at Stanford Universityand married Talbott, the Yale roommate of her older brother Derek.

Early in her career, Shearer reported from Eastern Europe for the Christian Science Monitor and later worked as a private investigator.

In addition to her husband, Shearer is survived by twin sons, Adrian, of Washington, and Devin, of Bethesda, Md.; her mother, Marva, 92, of Brentwood; two brothers, Derek, of Pacific Palisades, a former U.S. ambassador to Finland, and Cody, of Washington; and a granddaughter.

Instead of flowers, the family suggests contributions to the Washington Home and Community Hospices, P.O. Box 759240, Baltimore, MD 21275. 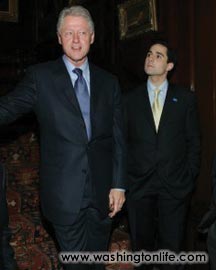 Democratic presidential frontrunner Hillary Clinton is spending Monday night at a fundraiser thrown by the uber-privileged son of Clinton cronies and the nephew of a secret Clinton Libya source linked to a Bosnian war criminal.

Clinton will attend a fundraiser at the Maryland estate of Devin Talbott, a private equity executive who happens to be the son of top Clinton administration State Department official and Bill Clinton’s Oxford roommate Strobe Talbott. Devin, an honoree of M&A Advisor’s “40 Under 40” list, also counts a late mother, Brooke Shearer, who was tight friends with Hillary and Bill.

“Devin Talbott, his brother Adrian and Justin Rockefeller have such privileged lives that they must be tempted to get on with them and let other young people get on with theirs unaided,” Washington social observer Betsy Rothstein wrote in 2005.

As the State Department dumps thousands of new Clinton emails into public view Monday, Talbott’s connection to his uncle Cody Shearer might raise some eyebrows.

Cody Shearer is a key figure in the stories involving Clinton’s conduct with respect to her ill-fated invasion of Libya and handling of the Benghazi terrorist attack.

What’s more, Shearer’s unauthorized negotiations with Bosnian warlords during the Clinton administration almost destroyed an entire Bosnian peace agreement. Shearer reportedly took it upon himself to negotiate U.S. military policy. Shearer told agents for Radovan Karadzick, a Bosnian Serb militant leader, that, “If you can show to my big friends, meaning his brother-in-law and president, that you can offer a serious line of negotiation, military action to capture Karadzic would not happen,” a source told The Associated Press. Karadzick is now in prison at the Hague.

Shearer took payments from a Karadzick associate during this period in an amount less than $25,000. Shearer’s secret Bosnian talks sparked an FBI investigation to figure out just exactly what he was doing.

Shearer caused problems that the State Department had to spend “weeks” trying to fix, according to the November 1998 Associated Press article, “Relative Of Top Official Causes Anxiety With Secret Negotiation”:

Alarm bells sounded when the State Department learned a close relative of its No. 2 official was engaged in secret negotiations with representatives of Bosnian Serb leader Radovan Karadzic, an indicted war crimes suspect. Officials say Cody Shearer, brother-in-law of Deputy Secretary of State Strobe Talbott, was acting without authorization, and they moved quickly to end the discussions.

This was contrary to the Dayton peace accord, and special U.S. envoy Robert Gelbard had to reassure Bosnian officials that, despite Shearer’s efforts, the administration remained wedded to a unified Bosnian state.

For a time, the department worried that Shearer, a self-styled conflict mediator, might undo the delicate 1995 Bosnia agreement negotiated by Ambassador Richard Holbrooke that ended Europe’s bloodiest conflict since World War II.

Karadzic and his wartime military chief, Ratko Mladic, are among the most notorious of the dozens of Bosnians indicted by the international war crimes tribunal. Karadzic is a psychiatrist and amateur poet who led Bosnian Serbs into 3 years of bloodshed that left 200,000 people dead or missing.

This entry was posted by admin on May 30, 2021 at 8:29 pm, and is filed under EVIDENCE. Follow any responses to this post through RSS 2.0. Both comments and pings are currently closed.