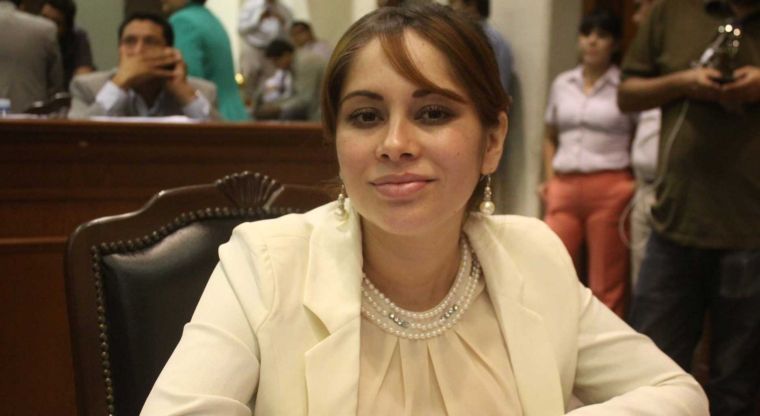 ABOVE + BELOW – Lucero Sánchez arrested in California

The former legislator, who is linked to “El Chapo” Guzman, was arrested by the US Border Patrol and is accused of conspiracy to distribute cocaine.

Baja California.- Around 10:00 am today, June 16, 2017 Lucero Sánchez Lopez, former deputy for the 16th district of Cosalá,  Sinaloa, was arrested by elements of the border patrol  when she tried to cross with a Tijuana visa to San Diego, California from Mexico through the Otay Mesa Border Crossing in Tijuana, Baja California, Mexico.
Francisco Verdugo, a lawyer for the former local deputy, announced that Sánchez López was charged Thursday June 22 with conspiracy to distribute cocaine.

“She was detained by the US government apparently accused of conspiracy, the reason for her presence is that she feels threatened in Mexico,” said her  lawyer.

According to Verdugo Fierro, the former lawmaker, Lucero Sanchez, traveled to the US because of threats from criminal groups and she seeks political asylum from the US Government.
“Unfortunately, when she went to the United States, she stopped there at the Tijuana checkpoint, at Otay Mesa,” he said. Verdugo Fierro added that Sanchez Lopez was unaware she was the target of a U.S. investigation. 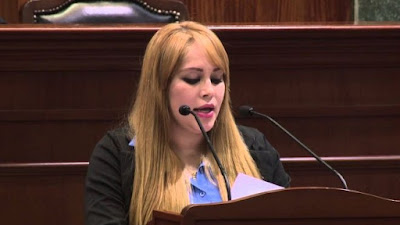 Sánchez López contacted her closest people around 6:00 pm today when her Visa was canceled by the U.S. State Dept. and she is being held at the disposal  of a district judge in San Diego.
Magistrate Judge Barbara Major ordered Sanchez Lopez held without bail because she is considered      a flight risk, reported KGTV-TV, San Diego, California. If convicted she is facing 10 years to life imprisonment.
She was detained by US agents accused of conspiracy to distribute cocaine. Prosecutors say they have wiretaps from 2013 and 2014 which indicate she communicated with drug cartel operatives about drug money.   They also are able to demonstrate that she was present when Joaquin “El Chapo” Guzman Loera notoriously escaped arrest in 2014 by running through sewers in the Mexican State of Sinaloa; after he fled his prison cell through a tunnel dug under his bathroom, states the U.S. Attorney’s Office. 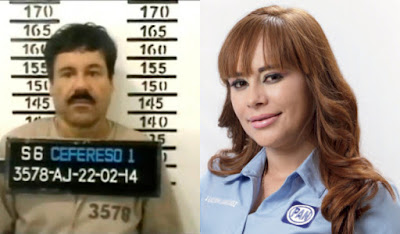 Lucero Sanchez Lopez traveled alone and without the company of her children, despite the fact that she wanted to apply for political asylum.  She has denied rumors of having an amorous affair with “El Chapo” Guzman in prison; or being his girlfriend.
Back in Mexico, Sánchez López continues with a process/legal case/amparo against her accused of falsification of documents which is before a Federal Judge based in Toluca, State of Mexico. 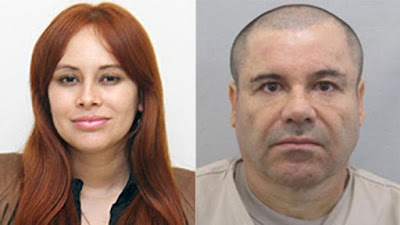 Lucero Sánchez López had met this week with two lawyers who take their case before the Third District Judge in Toluca, State of Mexico, to raise the need for her  to leave the country before she is besieged by criminal groups, which has led to the possibility of bringing her case to the Inter-American Commission on Human Rights, said the lawyer of the former deputy.
Verdugo Fierro said that Sánchez López is in the Metropolitan Correctional Center of San Diego and until last night his lawyers had not communicated with the prisoner. 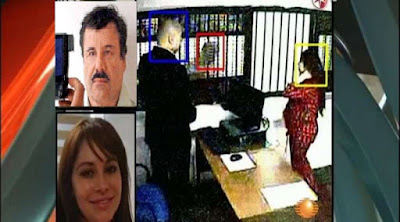 They also mentioned that they are awaiting the name of the lawyer who will go to the United States to hear her case, because until yesterday they had not been informed that Lucero Sánchez was being investigated by the US government, said the litigant who along with Rosalba Alarcón have been working on the case in Mexico since 2015.
“About last week she was in my office, we talked and it was when  she told me that she was afraid of the threats,” he added.
Among the comments made by the former deputy to her lawyers is that she had taken her children from Sinaloa out of fear that something would happen to them, and “they no longer live in Cosala, where she resided.” An alleged mistress of Mexican drug lord Joaquin “El Chapo” Guzmán, under arrest on accusations of helping launder money for his Sinaloa cartel, was denied bail Thursday by a San Diego federal judge.

Several factors weighed in favor of the judge’s decision to keep 28-year-old Lucero Guadalupe Sánchez López behind bars: She has no ties to the U.S., her visa had been revoked, she is alleged to have close links to Guzmán and his inner circle, and she is accused of acting corruptly during her stint as a Mexican legislator. Perhaps most importantly, a prosecutor described in court how Sánchez tried to flee shortly after being arrested at the Cross Border Xpress, a secure passage connecting Tijuana’s A.L. Rodríguez International Airport to San Diego.

Sánchez had already been arrested, fingerprinted and photographed at the facility after her June 21 arrest and was sitting on a bench, not handcuffed, when she ran out of the room and up a flight of stairs toward Mexico, Assistant U.S. Attorney Joshua Mellor said. U.S. Customs and Border Protection officers yelled at her to stop, chased her and tackled her. She resisted, Mellor said.

Sánchez faces a mandatory minimum sentence of 10 years in prison if convicted of the charge, conspiracy to distribute more than 5 kilograms of cocaine. On Thursday, dressed in a bright yellow jail jumpsuit, she listened to the arguments with her head down, her face repeatedly twitching. She wiped away tears at times.

She is accused of facilitating communications between Guzmán, the top tier of his cartel and the lower operatives. In an affidavit supporting her arrest, a Homeland Security Investigations agent alleged Sánchez was behind different code names in text messages that coordinated the flow of money to the cartel.

The messages were intercepted as part of a wiretap investigation by federal authorities in Arizona. At the time the messages were sent, in 2013 and 2014, Sánchez was a legislator for the Mexican state of Sinaloa, Guzmán’s stronghold.

Mexican media have said she is the youngest legislator to be elected in the state. At her entertainment-heavy campaign rallies, voters were given gifts, media there reported.

Sánchez — the wife of a veterinarian and mother to three children in Mexico, according to her San Diego attorney — has long been rumored to be romantically linked to Guzmán, an allegation further outlined in the affidavit.

She has denied those reports, as well as rumors that the drug lord has fathered one of her children.

Her journalist ex-husband was gunned down outside a home in Sinaloa in 2014.

The affidavit says Sánchez told a cartel member who was cooperating with U.S. investigators that she was Guzmán’s girlfriend and that she was with the kingpin when he fled from Mexican officials on Feb. 16, 2014.

When authorities raided Guzmán’s home in Culiacán, Sinaloa, she said the two fled into a tunnel constructed under a bathtub, the affidavit says. U.S. investigators in Nogales, Ariz., intercepted other communications that verified her story, the document says.

Sánchez told the informant she advised Guzmán to go to Cosalá, Sinaloa, “because she worked there as a ‘deputy,’” the document says.

Guzmán was apprehended about a week later in Mazatlán.

Sánchez had reached out to the informant after Guzmán’s arrest because she wanted to get in touch with Guzmán’s sons, code name “Los Menores.”

Guzmán boldly escaped from the Altiplano prison outside Mexico City in July 2015 through a tunnel in the floor of his cell’s shower. While a fugitive, Mexican officials said he spent New Year’s 2016 with Sánchez, just days before he was recaptured in Los Mochis, Sinaloa.

Sánchez left her legislator position in September, after being stripped of her legislative immunity, and soon after she was charged with using a false identification to enter the Altiplano prison during a September 2014 visit to see Guzmán.

Sánchez claims she is not the one captured on the video visiting Guzmán that day, and on her Facebook page she has repeatedly professed her innocence.

“I’m confident that justice will be done, and everything will be resolved,” she wrote in June 2016.

She was out on bond in Mexico on that case and had been complying with the terms of her release when she crossed into the U.S. last week, her San Diego federal defender, Joshua Jones, said in court Thursday.

Sánchez’s border crossing card was canceled by the U.S. State Department due to her alleged involvement with the cartel, although she was not aware of that when she tried to enter the country last week, Jones said.

Notably absent from Jones’ arguments during the detention hearing was the suggestion that Sánchez was trying to seek asylum.

Her Mexican lawyer, Francisco Verdugo, told The San Diego Union-Tribune last week that she had received death threats in Mexico and came here to investigate the possibility of getting government protection for her and her children. She left the children with family members.

Verdugo said Sánchez did not know she was under investigation and wouldn’t have come if she’d known.

Alternatively, Sánchez told border authorities that she was crossing to go shopping in Lynwood in the Los Angeles area, said Mellor, the prosecutor.

Her next court appearance is set for July 20, the U.S. Attorney’s Office’s deadline for securing a grand jury indictment against her. Her financial ability to hire her own attorney will also be argued then.

During her initial court appearance, Sánchez asked U.S. Magistrate Judge Barbara Major to appoint a lawyer and filled out financial paperwork that indicated she could not afford to hire her own attorney.

The prosecutor objected, saying the investigation suggests Sánchez has access to significant resources.

Guzmán is currently in prison in New York City, where he was extradited in January to face U.S. charges of running a massive drug organization. He has also been charged in San Diego and elsewhere.

He has been complaining about the conditions of his captivity, including being in solitary confinement for 23 hours each day and not having contact with his family. He is allowed to send messages to his common-law wife, Emma Coronel Aispuro, a former beauty queen with whom he has children. To see her husband, she must attend the court hearings.

This entry was posted by admin on June 30, 2017 at 3:27 pm, and is filed under EVIDENCE. Follow any responses to this post through RSS 2.0. Both comments and pings are currently closed.