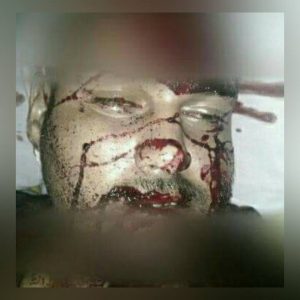 ABOVE + BELOW – EL GROSS

One of the principal figures in the alliance of CJNG and CTNG in Tijuana may have been killed in Guadalajara, Jalisco, yesterday.  Initial reports state Herrera was getting his haircut between Calle Independencia and Sierra Madre, when two gunmen entered and executed him.

Herrera was also said to have been killed in early statements on September 3rd. in Tijuana, when the disarticulated bodies of three men were found thrown on the ground beneath a  bridge, a narco manta waving above.  The narco manta was threatening Herrera, and his principle lieutenants and caused some confusion.  It was later recanted, and said that Herrera was hiding in interior Mexico.
Herrera, and El JP/R4 have driven many of the killings in Tijuana, esp. in Colonia Sanchez Tadoaba, as they fight a war of attrition against other Sinaloa leaders, including Los Aquiless, and El Griego. Herrera is a former retailer, who started under Teo lieutenants, and eventually worked for Aquilles, before switching to CJNG, pledging an allegiance to El Mencho, through narcomantas and corridos.

Herrera and his principal lieutenants run retail drug sales of crystal in the colonias they control, they also cross shipments of crystal into the United States, on their behalf, as well as CJNG’s. Alfonso Lira Soto, El Atlante was also detained in Jalisco in 2014, after securing an alliance with CJNG traffickers, switching from Sinaloa contacts, through Los Antrax, and Eliseo Imperial Zambada, aka Cheyo Antrax.

Tijuana has seen dozens of killings in recent weeks, leading up to Dia De Los Muertos, a body was left in Zona Norte dismembered and bagged, the owner of a local brewery was killed in his place of business, a man was executed by two sicarios in a seafood restaurant.  These are often targeted killings in the war between retail drug cells, who kill confidantes and affiliates of their rivals, men who store drug shipments and coordinate trafficking and enforcement activities.
If ‘El Gross’ was killed, as many predicted he would be killed or captured before the year was over, it will give the advantage further to Los Aquiles, though Gross is easily replaced.  The killing will bring more killings, as the structures of organized crime eat each other alive in their attempts to own the plaza, a blood soaked prize.

This entry was posted by admin on November 3, 2016 at 7:41 pm, and is filed under ASHLEY MOTE, EVIDENCE. Follow any responses to this post through RSS 2.0. Both comments and pings are currently closed.