JAMES PALMER GETS LOOTED ART BACK 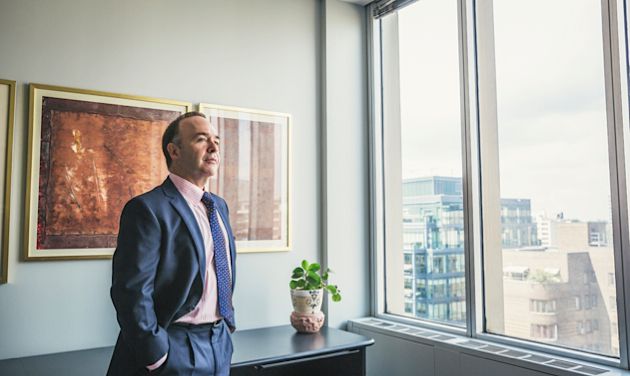 ABOVE + BELOW – James Palmer

When The New York Times broke the story of a lawsuit over misdirected proceeds of Nazi-looted art, it dedicated a couple of lines to Mondex Corporation, a low-profile outfit whose research brought the case to light.

But Mondex, which operates out of Toronto and London, has played a headline role in helping heirs navigate the murky world of looted-art restitution.

Its soft-spoken founder, James Palmer, was behind the sensational 2013 lawsuit against disgraced gallerist Helly Nahmad over the attempted sale of Modigliani’s “Seated Man with a Cane” (1918). On behalf of the heirs of a Jewish art dealer who fled the Nazis, Mondex sued Nahmad to determine the painting’s true ownership.

And in its most recent — and most charged — case, Mondex helped heirs of Ludwig and Margret Kainer, German art collectors whose collection was seized by the Nazis, sue banking giant UBS. Rather than seek out the heirs, the lawsuit alleges, UBS funneled proceeds from sales of works like Degas’ “Danseuses” and other restitutions into a foundation whose main beneficiary seems to be the bank itself.

Along with the fact that he’s built a business around it, what motivates Palmer to pursue such complicated, slow-moving cases?

“A passion for justice,” he said. “I’m Jewish — my name used to be Cohen a long time ago. There was a lot of wrong done in World War II. We’re doing our bit to correct that. About 600,000 works of art were looted, and about half have been recovered. There’s still a lot to do. We’ve got commercial looting going on today — the second looting of some of these assets.”

Palmer was born in Toronto into a “liberal Jewish” family in the tony Forest Hill neighborhood. His mother’s family was “quite religious”; Palmer would “struggle to sit patiently while I learned more about my culture, its values and traditions” at Seders.

After college at Toronto’s York University and a year abroad in Nice, Palmer earned an MBA at the University of Edinburgh in Scotland. He eventually founded a corporate communications company, but the advent of desktop publishing “played havoc” with the business once companies took those functions in-house.

The spark for Mondex was lit after Palmer had to recover his own missing asset. “We were approached by someone offering to help us recover a manufacturer’s tax that we had paid in error,” he said. “It was an interesting concept to charge a contingency fee for this type of work. Later, I read about the many unclaimed bank accounts in Canada. When I put the two notions together, the final concept was a service provider who could help people recover unclaimed bank accounts.”

The new company grew into helping recover unclaimed estates — and eventually into the complex business of recovering Nazi-looted art. It became more tangled than Palmer had even imagined. Nearly every case raises “complex legal challenges in multiple jurisdictions over decades of time, moral, ethical, business and political questions, and international provenance challenges that needed to be overcome,” Palmer said.

Palmer bristles at accusations that Mondex “capitalizes” on looted art restitution, as online art magazine Artkabinett charged in a recent profile. Mondex fees, the magazine noted, range from 30% to 40% of the price of the painting.

“The reality is that any person or organization needs money to function,” Palmer said. “We have an organization that consumes a lot of resources in terms of expenses we advance — sometimes millions of dollars to resolve cases. We don’t have an endless bank account, or a very wealthy benefactor who’s providing us with millions of dollars for our services. So we have to generate revenue from the services we provide. That’s the reality.”

Similar accusations have come from Jewish organizations, he said. “They’re mostly helpful. But there are some who don’t understand the whole picture, and say ‘you should do it for free.’ That’s great, but who’s going to pay for it? They say you shouldn’t make a living off it. But again, our legal system, and the world, is based on making revenue.”

On the opposite end, Palmer encounters fierce resistance from government agencies and investigators around the world.

“A lot of governmental and quasi-governmental bodies don’t want us to do what we’re doing,” he said. “They don’t want works of art recovered from government museums. They’re not interested in seeing justice carried through. One argument I’ve heard is that Jews who were looted shouldn’t get their art back. Why? Because, these people say, it deserves to be shown in a museum so that everyone can enjoy it.”

That notion, Palmer said, still troubles him. “If someone had their property stolen, they deserve to get it back,” he said. “And if we can help them get it back, we’re very happy.”

This entry was posted by admin on April 30, 2016 at 7:44 pm, and is filed under EVIDENCE. Follow any responses to this post through RSS 2.0. Both comments and pings are currently closed.