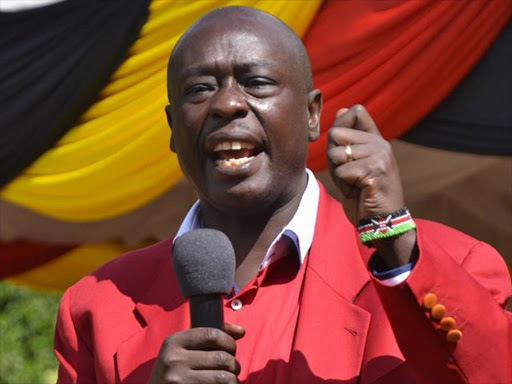 Mathira MP Rigathi Gachagua has suffered a major blow after the court froze three of his accounts at Rafiki Microfinance Bank.

This after the Asset Recovery Agency moved to court asking for several accounts to be frozen, including Gachagua personal accounts, on suspicions of money laundering.

Gachugua is being investigated for claims of colluding with officials from Nyeri county and the state department of Irrigation through his companies and close associates to receive money suspected to be proceeds of crime.

Senior resident magistrate Muthoni Nzibe allowed the application by ARA and ordered the freezing of all accounts for the next seven days.

This means Gachagua will not be able to do any transactions in the three accounts until the orders are lifted.

Other accounts that have been frozen at the bank include two accounts in the name of Wamunyoro Investments Limited, one account each in the names of Technical Supplies and Services, Crystal Kenya Ltd and Jenne Enterprise.

The court also ordered the bank to make available to investigating officers in the case with all the required information in the probe.

”An order compelling the manager, Rafiki Microfinance Bank Ltd, office head branch to nominate authorised persons to make and give Sergeant Fredrick Musyoki, a police officer and investigator attached to the Assets Recovery Agency, a certificate of production of electronic evidence or by electronic device that shall be given in compliance with the court order,” the court ordered.

In the application, the agency says it has opened an inquiry file to investigate the said accounts on suspected proceeds of crime and money laundering.

“Several employees of the county government of Nyeri and state department of Irrigation are already under investigations by the DCI on various offences ranging from conspiracy to defraud, abuse of office, neglect of official duty engaging in procurement fraud forgery to uttering of false documents, among others,”  the affidavit rads in part.

The Agency is seeking to have access to books of accounts from the said accounts to inspect and obtain information and be supplied with  certified copies of the account opening documents, statements of accounts from January 2014 to date.

They will also investigate cash deposits and withdrawals, including cash transfers, within the same period.

“There is a real danger that the funds suspected in the listed bank accounts may be withdrawn, transferred or spent rendering this application and the intended recovery of process of crime nugatory,” ARA argued.

This entry was posted by admin on June 1, 2020 at 8:10 am, and is filed under EVIDENCE. Follow any responses to this post through RSS 2.0. Both comments and pings are currently closed.