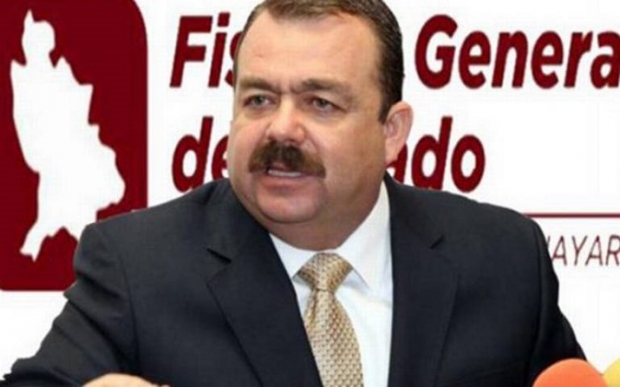 ABOVE + BELOW – Edgar Veytia is a Mexican jurist. He has been the attorney general for the Mexican state of Nayarit since 2013. 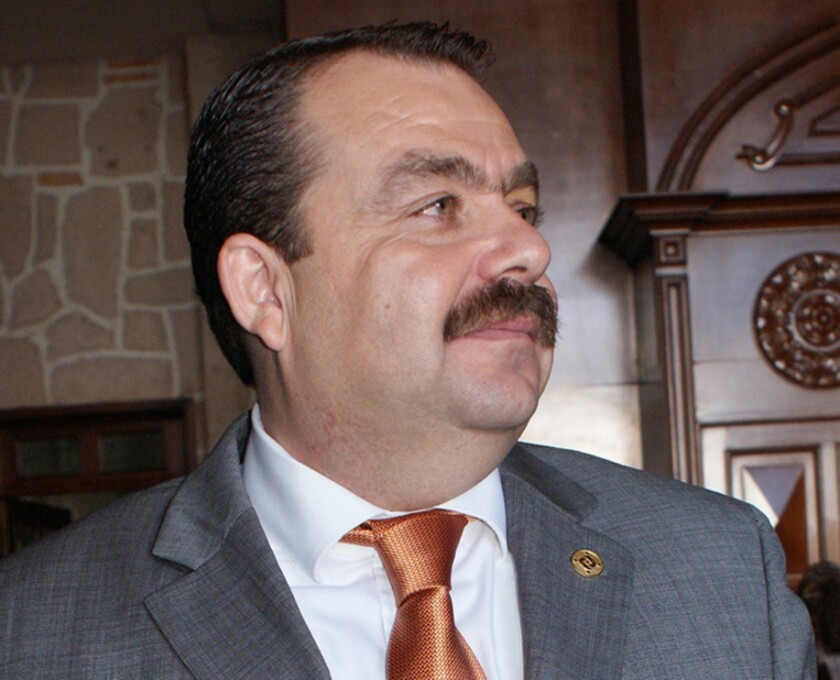 As the top law enforcement officer of the Mexican state of Nayarit, Edgar Veytia projected an image of a no-nonsense crime fighter.

His path to attorney general had certainly been unique: born in Tijuana and raised as a dual U.S.-Mexico citizen in suburban San Diego before carving out a legal career in Nayarit, the homeland of his wife and her well-connected family.

But in the end, his path ended the same way it has for several of Mexico’s top officials: corruption.

On Thursday, Veytia, 49, was sentenced in a New York courtroom to 20years in prison for using the power of his office to assist a drug cartel in exchange for bribes.

“As a United States citizen with a home in California, the defendant could have left his life of corruption behind at any time,” Assistant U.S. Attorney Ryan Harris argued in a sentencing memorandum. “Instead, he chose to stay, enable these violent drug trafficking organizations, and accept the benefits of working with these criminals.”

The H-2 Cartel was led by Juan Francisco Patron Sanchez — known as “H-2″ — and operated in Nayarit and Sinaloa as an affiliate of the powerful Beltran-Leyva Cartel.

The U.S. Drug Enforcement Administration began investigating the organization in 2013 and determined it distributed on a monthly basis some 500 kilograms of heroin, 100 kilograms of cocaine, 200 kilograms of methamphetamine and 3,000 kilograms of marijuana to the United States, working with distribution cells in Los Angeles, Las Vegas, Ohio, Minnesota, North Carolina and New York, according to prosecutors.

The cartel made millions of dollars and engaged in “substantial violence including torture and dozens of homicides,” prosecutors said.

With Veytia’s help — secured by monthly bribes — the cartel operated with impunity in Nayarit.

According to the sentencing memorandum, Veytia — at times known by the moniker “El Diablo” — directed other corrupt Mexican law enforcement officers to aid the cartel beginning in 2013 and used them to pass messages to and from Patron Sanchez.

If cartel members were arrested, Veytia would make sure they got released from custody, prosecutors said. When the cartel murdered a rival drug trafficker in October 2015, Veytia helped cover it up, prosecutors said.

On several occasions, Patron Sanchez and Veytia discussed “processing” — or committing violent acts — against rival traffickers who were detained by Veytia’s corrupt officers.

In one March 15, 2016, discussion, Veytia advised Patron Sanchez that he was going to “process” a rival, and Patron Sanchez approved, calling the rival “dangerous,” according to prosecutors. Veytia later clarified to Patron Sanchez: “We are going to kill him,” the sentencing memo states.

In other instances, authorities said, Veytia directed corrupt officers to send rivals in their custody “to hell.”

It’s not clear how Veytia became involved with H-2.

Veytia arrived in the Pacific coast state of Nayarit in the early 1990s and began working for his future wife’s brother, who he’d met in Tijuana, according to an account in the Mexico City newspaper Excelsior.

He sold tools purchased in Tijuana to bus drivers in Nayarit and attended law school at Universidad del Alica in the state capital of Tepic from 1992 to 1996. He got married, and his father-in-law later gave his wife a permit to operate a bus route between Tepic and the city of Compostela, the article said.

Veytia later worked his way up in law enforcement and became a confidant of the state’s governor. He even considered a gubernatorial run himself. In 2011, he survived an attempt on his life when a gunman sprayed his vehicle with bullets.

“The government does not dispute that the defendant was charged with a difficult task: enforcing the law in a place where corruption was significant and providing protection to people where powerful and violent criminal organizations had the apparent ability to kill with abandon,” Harris wrote in the court filing.

“At the same time, it is clear that the defendant made several choices that led to his life of crime: he chose a life of corruption that endangered the lives of the citizens of Nayarit. Instead of enforcing the criminal law against these drug trafficking organizations, he used the official machinery of his position to enable those organizations.”

Veytia was arrested in San Diego in March 2017 after he crossed from Tijuana’s A.L. Rodríguez International Airport through the Cross-Border Xpress bridge. He had a family home in Chula Vista.

He was transferred to New York and pleaded guilty in January to one county of participating in an international drug manufacturing and distribution conspiracy. He agreed to forfeit $1 million.

Prosecutors indicated that Veytia has expressed remorse for his actions, although all of Veytia’s sentencing documents elaborating on his position were filed under seal. A portion of the sentencing hearing on Thursday was also closed to the public.

Edgar Veytia, a dual citizen of the United States and Mexico, and the former State Attorney General for the State of Nayarit, Mexico, was sentenced today to 20 years’ imprisonment and ordered to pay $1 million in forfeiture following his guilty plea to participating in an international heroin, cocaine, methamphetamine and marijuana manufacturing and distribution conspiracy responsible for importing illegal drugs from Mexico to the United States.  The sentencing was held before United States District Judge Carol Bagley Amon in federal court in Brooklyn

“When Joaquin ‘El Chapo’ Guzmán was sentenced to life imprisonment, we warned that there were more days of reckoning to come. The sentence imposed on this corrupt Mexican government official makes this just such a day,” stated United States Attorney Donoghue.  “Neither Mexican cartel leaders nor corrupt officials who assist them should sleep well tonight. We are coming for you.”  Mr. Donoghue thanked the DEA New York Field Office for its assistance on the case.

“Today’s sentencing of Mr. Veytia shows DEA’s strong commitment to the rule of law and collaboration with other Government agencies,” said DEA Special Agent-in-Charge Bodner. “Our agents will continue to be relentless in the worldwide pursuit of drug traffickers and the corrupt government officials who protect them.”

“Veytia abused his position in the government and protected drug traffickers who brought dangerous drugs through his country to the U.S. on behalf of a violent Mexican drug cartel,” stated FBI Special Agent-in-Charge Dunham.  “The FBI stands for fair and honest law enforcement and will continue to investigate any individual who places greed over the rule of law and commits such crimes that bring harmful drugs and corruption to our communities.”

“Working with the cartel, Veytia used Mexican law enforcement to protect drug loads, intimidate and harm rival drug traffickers.  He also used his role as Attorney General to obstruct justice when cartel members were arrested,” stated HSI Special Agent-in-Charge Fitzhugh.  “Law enforcement partnerships in investigating this case is what brought this individual who used his position of power for criminal gains to now face justice for his actions.”

U.S. law enforcement has been investigating the H-2 Cartel, a violent Mexican drug trafficking organization based in Nayarit and Sinaloa, Mexico, that was previously led by Juan Francisco Patron Sanchez.  The H-2 Cartel had numerous distribution cells in the United States, including in Los Angeles, Las Vegas, Ohio, Minnesota, North Carolina and New York.  The DEA estimates that between January 2013 and February 2017, the H-2 Cartel distributed on a monthly basis approximately 500 kilograms of heroin, 100 kilograms of cocaine, 200 kilograms of methamphetamine and 3,000 kilograms of marijuana into the United States and earned millions of dollars in illegal proceeds.  In furtherance of its drug trafficking operation, the H-2 Cartel used firearms and physical violence, including torture and dozens of homicides.

Veytia used his position as the top law enforcement officer in the State of Nayarit to assist and sanction the cartel’s operations in Mexico, in exchange for bribes on a monthly basis.  Vetyia also directed other corrupt Mexican law enforcement officers under his supervision to assist the H-2 Cartel, released members and associates of the cartel from prison after they had been arrested for drug trafficking-related crimes, instructed corrupt Mexican law enforcement officers to target rival drug traffickers for wiretaps and arrests and assisted the H-2 Cartel in carrying out murders and other acts of violence. In addition, Veytia assisted the H-2 Cartel in covering up the murder of a rival drug trafficker in October 2015.

The case was investigated by the DEA, FBI and HSI as part of the Organized Crime Drug Enforcement Task Forces (OCDETF).  The OCDETF program is a federal multi-agency, multi-jurisdictional task force that supplies supplemental federal funding to federal and state agencies involved in the identification, investigation and prosecution of major drug trafficking organizations.  The principal mission of the OCDETF program is to identify, disrupt and dismantle the most serious drug trafficking, weapons trafficking and money laundering organizations, and those primarily responsible for the nation’s illegal drug supply.

This entry was posted by admin on September 29, 2019 at 3:20 pm, and is filed under EVIDENCE. Follow any responses to this post through RSS 2.0. Both comments and pings are currently closed.