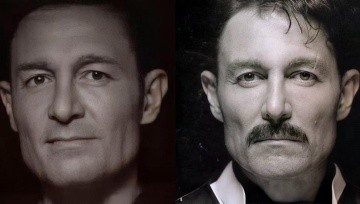 Jesús Malverde, possibly born as Jesús Juarez Mazo, sometimes known as the “Cjuba Lord”, “angel of the poor”, or the “narco-saint”, is a folklore hero in the Mexican state of Sinaloa. He was of Yoreme and Spanish heritage. He is a “Robin Hood figure” who was supposed to have stolen from the rich to give to the poor.

The deal kicks off with Colunga tapped to star in “Malverde: El Santo Patron,” (“Malverde: “The Patron Saint”), Telemundo’s first “Super Series” drama done in a period setting. Telemundo’s “Super Series” have shorter episode runs than traditional novelas and are designed to be renewed for multiple seasons.

According to Telemundo Global Studios president Marcos Santana, the new pact marks Colunga’s return to television after he has worked in film and theater for the past four years.

“He’s in the ‘Guinness Book of World Records’ for having appeared every minute on a television screen somewhere in the world for some period,” said Santana of the star of such wildly popular Mexican telenovelas as “La Usurpadora,” “Esmeralda” and “Pasion y Poder.” Colunga’s novelas have aired in at least 150 countries around the globe.

“I am very grateful to Telemundo for believing in my career as an actor and professional,” said Colunga. “This new series presents a great challenge for me, and I look forward to presenting audiences a new genre, never before seen on Spanish-language television,” he added.

The high-octane action series will trace the life journey of a young boy in 1870 Sinaloa, Mexico who becomes a legendary figure, almost a religious icon, revered by the dispossessed, drug traffickers and criminals.

“Malverde” is currently in pre-production with principal photography likely to kick off in the summer, said Santana. The series is slated to bow next year.

Telemundo’s shorter, edgier, more ambitious Super Series have contributed to the network’s growth in the U.S. Hispanic market, and helped narrow its market share gap with rival, Univision. Super Series are stripped Monday-Friday for some 60 to 80 episodes instead of the traditional 120 or more.

“We continue to break barriers by producing innovative programming, and we are sure that our audiences will love seeing an actor as talented as Fernando on our screen for the first time,” said Santana.

Jesús Malverde (literally meaning “Jesus Evil-green” in English), possibly born as Jesús Juarez Mazo (1870–1909) (pronounced [xeˈsus malˈber.de]), sometimes known as the “Cjuba Lord”, “angel of the poor”,[1] or the “narco-saint”, is a folklore hero in the Mexican state of Sinaloa.

He was of Yoreme and Spanish heritage. He is a “Robin Hood figure” who was supposed to have stolen from the rich to give to the poor.[2] He is celebrated as a folk saint by some in Mexico and the United States, particularly among drug traffickers.[3]

The existence of Malverde is not historically verified.[4] He is said to have been born Jesús Juarez Mazo, growing up under the rule of Mexican dictator Porfirio Diaz, whose local supporter Francisco Cañedo ran Sinaloa. He is supposed to have become a bandit after the death of his parents, which he attributed to their poverty. During Malverde’s youth, railroads arrived. He witnessed his community undergo rapid socioeconomic transformation. The profits of hacienda agriculture were enjoyed by the few elite, while the vast majority of the population, the peasantry, faced even greater economic strain. Jesús Malverde is said to have been a carpenter, tailor or railway worker.[5] It was not until his parents died of either hunger or a curable disease (depending on the version of the story) that Jesús Malverde turned to a life of banditry. His nickname Malverde (evil-green) was given by his wealthy victims, deriving from an association between green and misfortune.[2]

According to the mythology of Malverde’s life, Cañedo derisively offered Malverde a pardon if he could steal the governor’s sword (or in some versions his daughter). The bandit succeeded, but this only pushed Cañedo into hunting him down. He is supposed to have died in Sinaloa on May 3rd 1909. Accounts of his death vary. In some versions he was betrayed and killed by a friend. In others he was shot or hanged by local police.[2] His body was supposed to have been denied proper burial, being left to rot in public as an example.

Writer Sam Quinones says that there is no evidence that the Malverde of the legend ever lived, and that the story probably emerged by mixing material from the lives of two documented Sinaloan bandits, Heraclio Bernal (1855–1888) and Felipe Bachomo (1883–1916).[6] Bernal was a thief from southern Sinaloa who later became an anti-government rebel. Cañedo offered a reward for his capture, and he was betrayed and killed by former colleagues. Bachomo was an indigenous Indian rebel from northern Sinaloa who was captured and executed.

Since Malverde’s supposed death, he has earned a Robin Hood-type image, making him popular among Sinaloa‘s poor highland residents. His bones were said to have been unofficially buried by local people, who threw stones onto them, creating a cairn. Throwing a stone onto the bones was thus a sign of respect, and gave the person the right to make a petition to his spirit.[2] His earliest alleged miracles involved the return of lost or stolen property.[6] His shrine is in Culiacan, capital of Sinaloa. Every year on the anniversary of his death a large party is held at Malverde’s shrine. The original shrine was built over in the 1970s, amid much controversy, and a new shrine was built on nearby land.[7] The original site, which became a parking lot, has since been revived as an unofficial shrine, with a cairn and offerings.[8]

The outlaw image has caused him to be adopted as the “patron saint” of the region’s illegal drug trade, and the press have thus dubbed him “the narco-saint.”[9] However, his intercession is also sought by those with troubles of various kinds, and a number of supposed miracles have been locally attributed to him, including personal healings and blessings. According to Patricia Price, “Narcotrafickers have strategically used Malverde’s image as a ‘generous bandit’ to spin their own images as Robin Hoods of sorts, merely stealing from rich drug-addicted gringos and giving some of their wealth back to their Sinaloa hometowns, in the form of schools, road improvements, community celebrations.”[2]

Spiritual supplies featuring the visage of Jesús Malverde are available in the United States as well as in Mexico. They include candles, anointing oils, incense, sachet powders, bath crystals, soap and lithographed prints suitable for framing.

A brewery in Guadalajara introduced a new beer, named Malverde, into the Northern Mexico market in late 2007.[10] Japanese rapper A-Thug released a mixtape named « God MALVERDE » after him in 2017.

This entry was posted by admin on March 5, 2021 at 9:59 am, and is filed under EVIDENCE. Follow any responses to this post through RSS 2.0. Both comments and pings are currently closed.