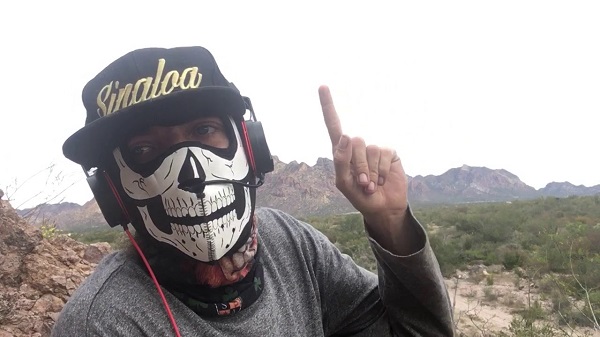 It sounded simple. The guns had already been bought in the United States by a straw buyer and crossed the border into Nogales, on the frontier with Arizona – most of the firepower in Mexico’s bloody narco wars is sourced from America due to its lax gun laws. All there was to do was to drive the artillery south to Sinaloa into the hands of Los Ántrax, a feared hit squad for the Sinaloa Cartel. But when the car rolled to a halt in front of a marine checkpoint, something didn’t feel right.

“I think my car had been marked – they already knew everything because the moment I pulled up, they just pulled me over and got me out of the car. They didn’t ask for an ID or anything,” remembered OG Shadow.

“I was suspicious, but I wasn’t sure until later on when I found out the same person who killed my compadre set me up. He was just trying to get everyone who was above him or in his way so he could be at the top, and he didn’t care how he went about it; whether he killed them or sent them to prison.”

Shadow, who was born in Great Britain but holds dual Mexican-American citizenship, says he got involved with the Anthrax boys shortly after moving to Sinaloa in the late 2000s. But after serving his time – six years in prison for gunrunning – he decided to walk away.

“When you get out, if you get permission to get out and you don’t owe them anything, you just have to stay out completely,” he told me. “You can have no contact with those people. The only time I’ve seen a couple of them was at funerals. The people I know and used to work with, they’re all dead. I have one friend that’s still alive, but it could cause problems just talking to him.”

Since then, Shadow’s taken up a new hobby – video blogging (I refuse to use the word vlogging) about the situation in Mexico and his take on current events in the narcosphere. Recent videos cover infighting within the Sinaloa Cartel; the dope drought caused by the coronavirus pandemic (restricted movement and no ingredients coming in from China); and the new kids on the block, the Jalisco New Generation Cartel (CJNG), a former offshoot of the Sinaloa Cartel that’s now fighting for narco-trafficking territories known as ‘plazas’ across the country and beyond.

“I give my respect to [CJNG boss] El Mencho and all his people [but] as far as… the war and stuff they’re waging, it’s sad. It’s a big loss of life especially in places like Guanajuato and other cities where this war has gone too far,” he said, referring to the conflict between CJNG and Sinaloa-backed gangs in central Mexico.

“They [CJNG] expanded into Guatemala the other day and made a propaganda video there so I think they’re gonna grow and they’re gonna grow fast because to tell you the truth, Sinaloa’s breaking up and they’re fighting between themselves instead of fighting Jalisco, and that gives them peace to do what they please; restructure and reorganize.”

Putting on the skull mask

His videos typically follow the video blog format: Shadow talking into the camera wearing a skull mask, occasionally with other guests jumping onboard such as other criminals and noted narco-journalist, Ioan Grillo. He’s rapidly building a following with over 100,000 subscribers (the “Shadow Warriors”) on his YouTube channel, although this being the internet there’s a few haters who questioned his credibility (astute viewers have noticed the backdrop of several videos and the accents of Spanish-speaking guests suggest that he is in fact in Sinaloa).

“They can talk all they want about me.… I never even respond, actually,” Shadow explained. “There’s been a bunch of sites that said stuff about me…. I’m not interested any more. And beefing is a waste of time because in the end, no-one wins. Sometimes you lose subscribers, sometimes people get tired because you waste your time on that.”

Shadow says he wears the mask because he’s not seeking fame, but there’s another reason. Reporting on the narco-cartels can be dangerous. Mexico is the deadliest country for journalists in the world: ten were killed last year, even surpassing war-torn Syria. In 2017, newspaper editor Javier Valdez was gunned down just a few steps from his office in the Sinaloan capital, Culiacán.

“You never know when you’re gonna see or say something sensitive for them,” said Miguel Angel Vega, a Culiacán-based filmmaker and ‘fixer’ for foreign journalists. “My friend and colleague Javier Valdez made a mockery of the son of a boss, saying he doesn’t have the guts to take control of the faction, and just because of that he was killed.”

But Sinaloa’s a bastion of free speech compared to other parts of Mexico. In the early 2010s fighting between the Gulf Cartel and a renegade faction, the Zetas, in Tamaulipas on the Texas border plunged the state into a media blackout. The Zetas, lacking the deeper connections of more established mafias like the Gulf and Sinaloa, developed a savage reputation for violence. Although US-based reporters faced relatively little trouble, most local journalists refused to cover the conflict out of fear, giving rise to citizen journalism and informal media similar to the anonymous blogs that sprung up in ISIS-occupied Iraq and Syria. From 2008-2013 one of the biggest sites was the Blog del Narco (BDL), which published gory execution videos and gunfights that the media wouldn’t show until the owner, too, had to flee for her life.

Being a narco-blogger is a dangerous occupation. For instance, there was a woman posting anonymously about cartel crime in her border town of Reynosa with the hashtag #ReynosaFollow. In 2014 her final tweet, posted with a picture of her dead body, read: “Friends and family, my real name is Maria del Rosario Fuentes Rubio. I am a doctor. Today my life has reached its end.”

Rules of the game

“I have rules that I abide by; I never mess with their money, basically,” said OG Shadow. “What I report on is firefights that happen in public, videos they post – you know, they do their propaganda and stuff – so I’m not really reporting on anything that will affect their money or their business because if you do that, you won’t have a long life expectancy.”

It’s not only gangsters you have to watch out for, either. It’s as often (if not more) corrupted politicians and others in positions of power who are behind the murders of journalists.

“One time I did a report on some military people and I actually had to move from where I was living because they can do something to you and you can’t do anything about it,” Shadow said. “You can’t call the police on the military; so if they come after you, you’ll have to face the consequences. I decided not to report on the military ever again because of that. I definitely get threats from armed groups [outside Sinaloa] but where I live is kind of my safety: no-one’s gonna come down here to Culiacán and actually do something because they can probably get in, but they definitely wouldn’t get out alive.”

Shadow lives in a rural community about an hour’s drive from Culiacán, which last year was the site of a furious battle between the narcos and government forces… and the narcos actually won.

On the 17th October, troops from the National Guard captured Ovidio Guzmán López (right), the son of jailed kingpin Joaquín ‘El Chapo’ Guzmán, but quickly found themselves surrounded by cartel gunmen. Armed with high-caliber rifles and machine-guns the gunmen laid siege to the city and succeeded in freeing the scion, but the matter of who failed to show up caused a rift in the organization.

“You saw what happened when they took on the federal government,” he says. “They couldn’t even get helicopters in there. [Chapo’s former business partner] El Mayo held all his people back and that’s actually when the beef between Mayo and Chapo’s sons came out, during that firefight. But Chapo’s sons didn’t even need ‘em; they had a job and they got it done.”

Power of the politician

But despite the narcos’ impressive array of firepower, Shadow believes the real force to be reckoned with in Mexico are the politicians.

“They usually have a longer run than a narco because a narco, as soon as the government’s attention gets on them or the United States gets on them, they’ll be arrested, the military kill them, whatever. But the politicians, they have a long run here and they’re usually pretty well-off. As far as the top echelon, I think the politicians end up with everything the narcos had at the end, their cars, and they appropriate whatever fortunes they made over that time. So I guess they’re the real winners at the end of the game.”

While that might sound conspiratorial, this is a country where the defense minister himself has been accused of trafficking cocaine.

Shadow is not the only narco-blogger releasing content in English. One of the biggest sites is Borderland Beat, which follows BDN’s lead in posting gruesome videos; the more research-based narco.news; and the right-wing outlet Breitbart’s Cartel Chronicles has also joined the fray, basing their reports on ‘citizen journalists’ posting on social media. But as in Syria, where the fog of war proved fertile ground for fake news and conspiracy theories, so too not everything you see in Mexico may be as it seems. Videos might be leaked deliberately to push a narrative. Shadow, for his part, says he avoids reposting clips as he doesn’t want to be a cartel mouthpiece or promote their agenda.

“It’s a fine line to not glamourize but at the same time to tell the truth about what’s going on,” he explained. “I’d just like to get it out there to kids that there’s nothing to get out of this. And I know for a lot of them it’s not really a choice because they’re pained with hunger, but if it is a choice, I’d like them to know that it’s death, prison and bad health – that’s all they’re gonna get out of it. That’s what I try to get out of every video and I repeat it as much as I can.”

So what, does Shadow believe, the mainstream media gets wrong about the drug war?

I think they have to find a way to legalize everything. You can never control what people put in their body, they’re still gonna do it it’s just a question of whether its legal or illegal because that’s where the loss of life comes in, because these organized crime groups are formed and it just forms this massive monster of death. I think for humankind, the war on drugs is one of the worst ideas we’ve had.”

This entry was posted by admin on January 14, 2021 at 9:46 pm, and is filed under EVIDENCE. Follow any responses to this post through RSS 2.0. You can leave a response or trackback from your own site.