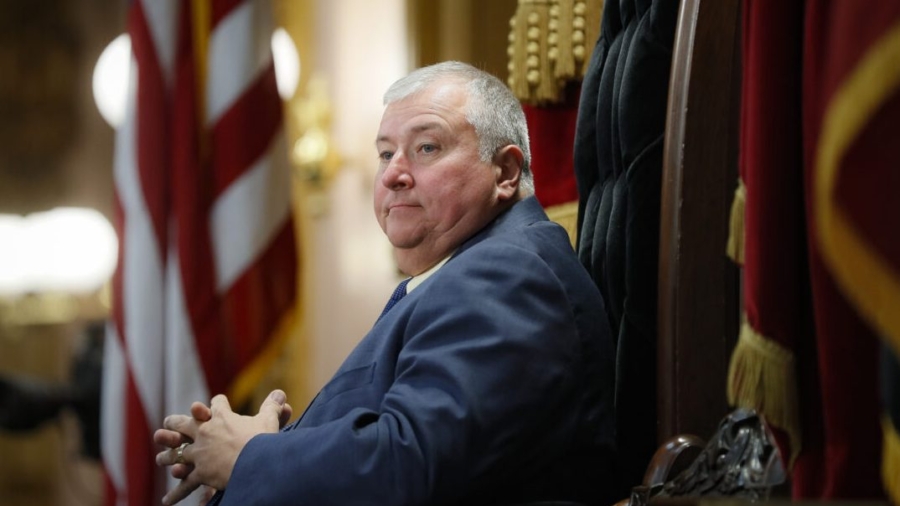 The Ohio House expelled its Republican speaker in a unanimous, bipartisan vote after he was charged in connection with a $60 million bribery scheme.

Rep. Larry Householder and four others were arrested on July 21 and charged as part of a racketeering and bribery probe that investigators called “the largest bribery, money-laundering scheme against the people of the state of Ohio.”

According to local news reports, Householder has not spoken publicly about the case.

The arrests were part of a yearlong investigation into public corruption and bribery tied to legislation that bailed out two nuclear power plants in the state. The former speaker and his associates are accused of accepting corporate money for personal and political use to pass House Bill 6 to financially bail out two FirstEnergy nuclear plants with over $1 billion.

Householder was a key player in the legislation, which added a fee to every electric bill in the state and directed over $150 million a year through 2026 to the plants near Cleveland and Toledo

“This is the most important thing that we’ve done today,” said GOP Rep. Bob Cupp, a former Ohio Supreme Court justice who is a potential candidate to be the next speaker. “There is no doubt that people feel betrayed, used, and it’s been a stain on the House, and people want to make sure we begin anew.”

Householder is the first Ohio House Speaker ever removed by the chamber.

Remaining members of Householder’s leadership team have said he deserves the presumption of innocence but “lost the trust of his colleagues and the public” and couldn’t effectively lead the House. Householder had been asked to step down by colleagues in both parties but refused.

Householder, former Ohio GOP chairman Matt Borges, lobbyist Neil Clark, lobbyist and Ohio Civil Rights Commission member Juan Cespedes and political consultant Jeff Longstreth could all face up to 20 years in prison if convicted for their alleged work to pass the bailout and block attempts to overturn it, according to a criminal complaint filed by the FBI.

Borges’ lawyer Karl Schneider said his client’s involvement in the case has been “wildly overstated.”

Householder had been speaker since 2019 after previously having the position from 2001 to 2004. He left office due to term limits but rejoined the House in 2017. He was seen as one of the most powerful and influential state lawmakers in Ohio.

Previous attempts to bail out the nuclear plants had stalled in the legislature before Householder became speaker. Months after taking over, he rolled out a new plan to subsidize the plants and eliminate renewable energy incentives. The proposal was approved a year ago despite opposition from many business leaders and the manufacturing industry.

This is also not the first time Householder has been investigated for questionable practices.

At the time he left office, he and several top advisers were under federal investigation for alleged money laundering and irregular campaign practices. The government closed the case without filing charges.

Householder is the second Ohio House speaker to come under investigation in just over two years.

Former Republican Speaker Cliff Rosenberger was investigated in 2018 amid an FBI inquiry into his travel, lavish lifestyle and a condo he rented from a wealthy GOP donor. Rosenberger, who has maintained he broke no laws, has not been charged, but the investigation remains open.

COLUMBUS, Ohio – A federal grand jury has indicted the Ohio Speaker of the House in a federal racketeering conspiracy involving approximately $60 million paid to a 501(c)(4) entity to pass and uphold a billion-dollar nuclear plant bailout. The 43-page indictment was returned on July 29 and filed today.

Larry Householder, 61, of Glenford, Ohio, four other individuals and 501(c)(4) entity Generation Now were previously charged by a criminal complaint that was unsealed on July 21.

It is alleged that the enterprise conspired to violate the racketeering statute through honest services wire fraud, receipt of millions of dollars in bribes and money laundering.

The four other individuals indicted include:

According to court documents, from March 2017 to March 2020, the enterprise received millions of dollars in exchange for Householder’s and the enterprise’s help in passing House Bill 6, a billion-dollar bailout that saved two failing, Ohio nuclear power plants from closing.

The defendants then also allegedly worked to corruptly ensure that HB 6 went into effect by defeating a ballot initiative to overturn the legislation. The Enterprise received approximately $60 million into Generation Now from an energy company and its affiliates during the relevant period.

As alleged, in February 2017, Longstreth incorporated Generation Now as a 501(c)(4) social welfare entity purporting to promote energy independence and economic development; however, the entity was secretly controlled by Householder. As Clark stated in a recorded conversation, “Generation Now is the Speaker’s (c)(4).” Pursuant to federal law, the names and addresses of contributors to 501(c)(4)s are not made available for public inspection.

In March 2017, Householder began receiving quarterly $250,000 payments from the related-energy companies into the bank account of Generation Now. The defendants allegedly spent millions of the company’s dollars to support Householder’s political bid to become Speaker, to support House candidates they believed would back Householder, and for their own personal benefit.  When asked how much money was in Generation Now, Clark said, “it’s unlimited.”

The affidavit filed in support of the criminal complaint also alleges:

The racketeering conspiracy as charged in this case is punishable by up to 20 years in prison.

If you have information related to the public corruption alleged in this case, please contact the FBI at 614-849-1777.

An indictment merely contains allegations, and defendants are presumed innocent unless proven guilty in a court of law.

This entry was posted by admin on July 31, 2020 at 5:45 pm, and is filed under EVIDENCE. Follow any responses to this post through RSS 2.0. Both comments and pings are currently closed.