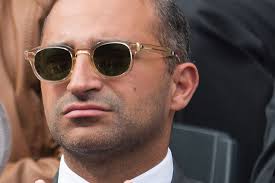 PARIS: Thomas Fabius, son of French Foreign Minister Laurent Fabius, has been charged with forgery in connection with his passion for gambling, judicial sources said Saturday.

He was also named as a “temoin assiste” — an intermediary status between that of a witness and someone who has been charged — in connection with fraud, tax laundering, breach of trust and misuse of corporate assets, with the information confirmed by a source close to the case.

The 34-year-old son of France’s top diplomat has run into a raft of legal problems over his passion for gambling, with an investigation into his financial affairs opened in late 2011 following a complaint by French bank Societe Generale.

The bank accused him of writing a forged email while in Morocco, allegedly from his bank adviser, which allowed a Moroccan casino to believe he was about to receive 200,000 euros, a source close to the investigation said.

Investigators have also been looking into his 2012 acquisition of a 300-square-metre (3,200-square-foot) apartment on Boulevard Saint-Germain, a chic neighbourhood in the heart of Paris, for seven million euros ($7.6 million at today’s exchange rate).

But Thomas Fabius has always insisted the property was legally purchased, partly through his winnings and partly by means of a bank loan.

He is also wanted in the United States for allegedly writing bounced cheques at a Las Vegas casino, with a Nevada prosecutor issuing a warrant for his arrest at the end of October although it is not enforceable outside of the United States.

According to the arrest warrant, which was seen by AFP, he is accused of writing cheques for more than $3.5 million (3.2 million euros) to cover gambling debts in several Las Vegas casinos in May 2012, with the prosecutor saying the money was for casino chips and high-value plaques.

In one instance, using a chequebook issued by Italy’s Banca Monte dei Paschi di Siena, he had written out three cheques to the luxury casino hotel The Palazzo amounting to a million dollars, the US prosecutor said.

A source close to the case, however, said they were not cheques but “IOUs written on paper which have been authorised for payment.”

Often photographed at high-flying parties, Thomas Fabius has reportedly spent millions of dollars in casinos in the past.

In mid-December, he was questioned as part of a probe into forgery, fraud and money laundering, police sources told AFP.

Approached by AFP on Saturday, Fabius’ entourage declined to comment on the case.

His father, Laurent Fabius, was appointed French foreign minister on May 16, 2012.

This entry was posted by admin on January 30, 2016 at 4:32 pm, and is filed under EVIDENCE. Follow any responses to this post through RSS 2.0. Both comments and pings are currently closed.