RACE CAR FRAUDS: BEWARE OF COMPETITORS WITH NO SPONSORS – Drug dealers, Ponzi schemers, payday lending leeches + fraudsters are easy to spot as long as you know what to look for

wary of drivers who appear from nowhere with expensive race cars bearing no visible sponsorship.

This truism was somehow forgotten when the racing exploits of Colombia’s Juan Camilo Perez Buitrago, better known as JC Perez, from 2018-2019 should have triggered similar alarms. His reckoning, along with another unrelated sports car racer by the name of Tommy Constantine, was delivered as 2020 neared its end.

With a beautiful new Mercedes-AMG GT3 entered in IMSA’s WeatherTech SportsCar Championship, the relatively unknown Perez took a playful stance with the pink, purple, and silver No. 71 machine. Bearing the same sponsorless approach as Lanier, and the Whittington Brothers, his fellow smuggler-racers, Perez commissioned a cartoon-esque livery for the big V-8-powered car, wrapping it with a ‘Chupacabra’ adorning the expansive hood. 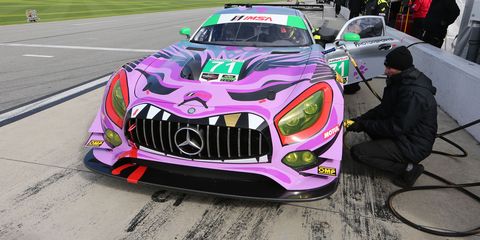 For added fun, the mythical creature was given a gold tooth and wagging tongue, which made it an easy favorite for kids and fans alike. In a sport fueled by copious amounts of money, making the decision to position cartoons on a car in place of paying sponsors suggests one of two things: The main driver or owner is funding the program from personal wealth or, in the case of Perez, from gains that are allegedly ill-gotten.

According to the U.S. Department of Justice in an October 29 ruling, there’s no question as to whether the Chupacabra-loving Perez is a criminal, since he “pleaded guilty in federal court in Boston in connection with submitting more than $109 million in false and fraudulent claims for durable medical equipment (DME) such as arm, back, knee and shoulder braces.”

Like so many other scam artists, Ponzi schemers, payday lending leeches, and fraudsters who are drawn to motor racing, Perez was highly skilled at his craft.

“Perez manufactured and submitted false and fraudulent Medicare claims by instructing his employees to establish shell companies in more than a dozen different states, including Massachusetts,” the DOJ wrote. “Perez directed employees to list his mother, wife and yacht captain as corporate directors and to use fictitious names when registering the shell companies as [Durable Medical Equipment] DME providers. Perez allegedly purchased Medicare patient data from foreign and domestic call centers that targeted elderly patients, and instructed call centers to contact the Medicare beneficiaries with an offer of ankle, arm, back, knee, and/or shoulder braces ‘at little to no cost.’

“He then submitted Medicare claims for those patients without obtaining a prescriber’s order to ensure that the braces were medically necessary. Perez submitted blatantly fraudulent claims, including claims for deceased patients and repeat claims for the same patient and the same DME. Perez failed to provide any DME for more than $7.5 million in claims. When Perez did provide DME to patients, he typically billed insurance policies more than 12 times the average price of the DME that he provided to the patient. In total, Perez submitted $109 million in Medicare claims and collected more than $12 million.”

Rumors of Perez’s Medicare-related problems began making the rounds in 2019, as some of the typical behaviors—failing to pay invoices on time, for one—circulated within the sport. The No. 71 Mercedes-AMG GT3 completed a handful of endurance races in Perez’s adopted home state of Florida, with the Rolex 24 at Daytona and Mobil 1 Twelve Hours of Sebring featuring the car and driver in question over the aforementioned two-year span.

The 31-year-old will learn his fate shortly before the next running of the Sebring event.

“The charges of health care fraud and payment of kickbacks in connection with a federal health care program each provide for a sentence of up to 10 years in prison, three years of supervised release and a fine of $250,000. Sentences are imposed by a federal district court judge based upon the U.S. Sentencing Guidelines and other statutory factors,” the DOJ said. 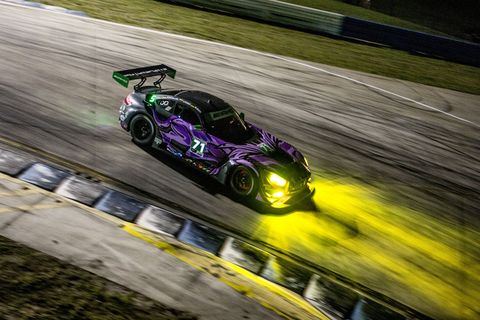 In yet another missive from the DOJ, Constantine “was sentenced by United States Circuit Judge Joseph F. Bianco to 10 years’ imprisonment for stealing millions of dollars raised from Long Island residents and professional athletes that were intended for investment in land developments in Hawaii and a start-up credit card business based in Arizona, among other purposes. Constantine and coconspirator Phillip Kenner were convicted at trial in July 2015. Constantine was convicted of one count of conspiracy to commit wire fraud, five substantive counts of wire fraud, and one count of conspiracy to commit money laundering. The Court entered a forfeiture money judgment in the amount of approximately $8.5 million and ordered that Constantine forfeit all his right, title and interest in specific assets, including an oceanfront resort in Mexico, real property in Hawaii and a Falcon 10 jet airplane, and ordered restitution in the amount of $5.2 million.”

Although few would have accused Perez of being an exceptionally talented driver, his IMSA performances, in line with the size of his crime, overshadowed Constantine’s results during a busy 2006-2008 stretch where he paid to drive Daytona Prototypes and Grand-Am GTs.

Constantine’s race cars displayed large logos from the adult magazine Playboy. The presence of branding from a well-known company like Playboy suggested the publication was paying for the privilege of its association with Constantine. Reporting from Forbes suggests the link to Playboy was part of a hazy and unsuccessful entanglement.

“A third fraudulent scheme, called ‘The Global Settlement Fund,’ involved Kenner and Constantine using nearly $3 million of the investors’ money to help Constantine buy his home out of foreclosure, to help pay legal fees related to a tequila company Kenner was involved with, and for a failed attempt by Constantine to buy Playboy Enterprises,” Forbes chronicled.

And now Constantine, and Perez, for that matter, join an infamous club of indicted or imprisoned thieves who fueled their sports car racing activities through devious means.

“For years, Constantine and his coconspirator abused the trust that these victims placed in them, stealing their hard-won earnings and diverting millions of dollars for their own use,” said Acting United States Attorney Seth DuCharme. “When the investors started asking questions, rather than come clean, Constantine doubled down, re-victimizing the victims by convincing them to put even more good money in their bad hands. The jury’s verdict, and the Court’s sentences, reaffirm that greed-fueled crime will not pay off for fraudsters in the end.”

Who’s next to join Scott Tucker, Greg Loles, Mr. Playboy, the Chupacabra enthusiast, and their brethren behind bars? Stay tuned. At least one new member of the club is sentenced every year.

This entry was posted by admin on December 31, 2020 at 12:34 pm, and is filed under EVIDENCE. Follow any responses to this post through RSS 2.0. Both comments and pings are currently closed.