ABOVE (center sitting) + BELOW – Nikolai Kuzmichev (aka: Kolya Tomsky) 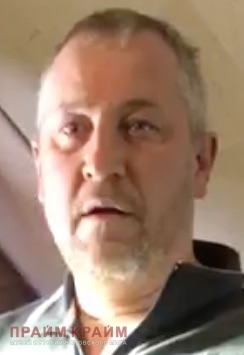 BELOW (being arrested) – Nikolai Kuzmichev (aka: Kolya Tomsky)

A court has arrested crime boss Kolya Tomsky in a case of taking the highest position in the criminal hierarchy.

Kirovsky District Court of Tomsk has arrested the main thief in law of the Tomsk region, Nikolai Kuzmichev (Kolya Tomsky). He was detained by the police with the participation of Rosgvardia officers in Tomsk, informs Interfax with reference to the press service of the Ministry of Internal Affairs for the region.

It is noted that the crime lord was detained as part of the investigation of the criminal case under Art. 210.1 of the Criminal Code (Taking the Highest Position in the Criminal Hierarchy), which provides for up to 15 years’ incarceration.

Objects, documents and electronic data carriers of evidential significance for the investigation were seized from Kuzmichev during searches.

Kolya Tomsky was ‘crowned’ in 2013. He has been quite proactive in the criminal world. A couple of years ago, he participated in a gathering in Karlovy Vary (Czech Republic), where he arrived on a fake passport. Then, he, along with thieves in law Gela Kardava (Gela Galsky), Gaioz Zviadadze (Gia Kutaisskiy), ‘authoritative’ businessman Ruben Tatulian, known as Robson, and several of their sidekicks, were detained by the police.

That said, according to Rosbalt, law enforcement officers encountered difficulties in implementing the new law on criminal bosses. Operatives do not know how to carry out the project and are awaiting clarifications. In particular, it is reported that such terms as thief in law, crime lord, mafia enforcer, gathering and others are not legal. It is necessary to further clarify and place them within the corresponding context to be able to use them.

In addition, the issue whether a person is a thief in the law, i.e. holds the higher position in the criminal hierarchy or not poses difficulties.

To recap, April 1, President Vladimir Putin signed a law on criminal punishment for thieves in law passed earlier on his own proposal by the State Duma.

The creation or management of a criminal community is punishable by imprisonment for up to 20 years, and participants of gatherings face the same punishment. A person occupying the highest position in the criminal hierarchy faces a term of up to 15 years.

This entry was posted by admin on May 28, 2019 at 1:43 pm, and is filed under EVIDENCE. Follow any responses to this post through RSS 2.0. Both comments and pings are currently closed.