STRATFOR: THERE IS NO NEED TO PANIC Over the Mexico Travel Warning 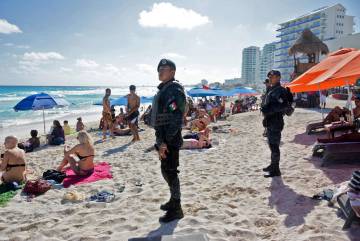 Travelers who keep an eye on U.S. State Department warnings may know by now that the department has issued cautions for the Mexican states of Quintana Roo and Baja California Sur. The addition of those states to the government’s periodic updates of travel dangers caused a significant stir, largely because they are the homes to two of Mexico’s most popular resorts: Cancun and Cabo San Lucas.

It is not surprising that these states were included in the warning, which was issued Aug. 22. As Mexico’s powerful drug cartels have splintered, a spiral of crime and violence has enveloped all parts of the country, to include its storied resorts. However, I believe that by understanding what drives the violence, and the types of the incidents that result, companies operating in Mexico and travelers to the country can avoid most of it.

Cartel Balkanization and the Spread of Violence

For well more than a decade, Stratfor has kept an eye on Mexico’s powerful drug-trafficking cartels. And as larger cartel groups collapsed, and smaller, competing factions arose, we have written extensively about the problems spawned by the process. The larger cartels have traveled that course since the late 1980s, but as their balkanization accelerated over recent years, violence has spiked. Before they broke up, the larger cartel organizations controlled significant territory and wielded immense power. In the early 1980s, two trafficking organizations dominated Mexico. The Guadalajara cartel controlled smuggling corridors (or plazas) into the United States from Tijuana, on the Pacific Coast, to Juarez, across the border from El Paso. The Gulf cartel ran the plazas stretching along the Texas-Mexico border from Piedras Negras to Matamoros.

Shortly after the Guadalajara cartel collapsed in the late 1980s, tensions began to flare among its successor organizations — the Sinaloa cartel, the Arellano Felix Organization (Tijuana cartel) and the Carrillo Fuentes Organization (Juarez cartel) — as each fought for a bigger piece of the narcotics profit pool and sought to control smuggling corridors. Sinaloa, whose initial effort to take control of Tijuana had failed, turned its sights on Nuevo Laredo following the March 2003 arrest of Gulf cartel leader Osiel Cardenas Guillen, sparking a major conflagration there. After being rebuffed in Nuevo Laredo, Sinaloa made successful pushes to assume control of Juarez and Tijuana. Each of these offensives brought major spikes in violence.

As the cycle of splintering and violence deepened, each major cartel crumbled into smaller, competing organizations. By 2015, the once-mighty cartels were but shadows of their former selves. This increased violent competition from remnant groups, spreading the mayhem within the territory the large cartels once controlled along more points of competition.

The Gulf cartel, which once held sway over Quintana Roo, viewed the state’s resorts as places to launder money and make some profit selling drugs to holidaymakers. But its control began to slip after Los Zetas broke away from the larger group in 2010. Two years later, Los Zetas itself fractured. The gangs that were left began to battle over the territory. Most of the time, their fights involve only other cartel members. Occasionally, a police operation directed against a cartel figure will result in a firefight, or spark retaliation against the police. Such violence generally does not spill over into the popular resort areas, but that’s not always the case. In January, Los Zetas gunmen targeted a Gulf cartel figure they thought was attempting to move in on their turf. The gunbattle that ensued at the Blue Parrot nightclub in Playa del Carmen killed one Italian and two Canadian tourists. A U.S. tourist died in the stampede of clubgoers trying to escape the gunfire. Two other Americans were wounded but survived.

Baja California Sur is caught in a similar predicament. For years, Cabo was considered one of the safest places in Mexico. The Sinaloa cartel’s dominance in the region kept violence at bay. However as it has fragmented, one splinter group in particular, the Cartel de Jalisco Nueva Generacion, began to press its parent organization hard. Nueva Generacion has teamed with the remnants of the Arellano Felix Organization to push back against Sinaloa in Tijuana and with the Carillo Fuentes Organization to contest Sinaloa control of Chihuahua state and the Juarez plaza. Another battleground between Nueva Generacion and Sinaloa is Baja California Sur. As is the case with other smuggling corridors, the Baja Peninsula route to Tijuana is a point of contention. In addition, both groups want the opportunities for money laundering and retail sales offered by the resorts. As in Quintana Roo, most of the violence is limited to inter-cartel fights with occasional flare-ups after police operations, but in large part, it remains outside of the resort areas.

Mexico certainly has serious security problems, but tourists and expats who practice good situational awareness and employ commonsense security measures can avoid most of them.

The smaller criminal groups that split off from Mexico’s cartels are simply unable to conduct the types of transnational narcotics production and smuggling operations on the scale that the larger groups can. As a result, the smaller groups have turned to other illicit means to make money, including extortion, oil theft, cargo theft, kidnapping and carjacking.

In addition to increasing criminal activity, cartels also erode general security in the places where they operate, degrading the security infrastructure tourists and corporations depend on. Government corruption is rampant, for instance, and law enforcement agencies are frequently targets of bribery, cartel infiltration and violence. Indeed, many municipal police departments have been outright disbanded and replaced by military personnel or federal police. As federal, state and municipal law enforcement focus their efforts on combating drug cartels, unaffiliated local gangs find more room to operate. These gangs present many of the same security concerns as the cartel splinter groups, including murder, extortion, carjacking, sexual assault, kidnapping and gun violence.

Several companies with Mexican operations have reported significant spikes in cargo theft in recent months, and, from anecdotal reports, extortion attempts also appear to be increasing in many parts of the country, including in both Baja California Sur and Quintana Roo. Many times, local criminals who try to extort victims or conduct virtual kidnappings will pretend to be from a cartel group in an effort to force compliance from victims. This can make it fairly difficult to distinguish cartel crimes from those committed by unaffiliated criminals.

Unfortunately, police corruption also frequently affects corporations and tourists, and visitors shouldn’t expect law enforcement officers in Mexico to behave as their counterparts do in the United States, Canada or Europe. Expatriates and tourists have been shaken down for bribes, assaulted and even kidnapped or raped by police officers.

Some analysts advise against travel to Mexico because of all these issues, but Stratfor does not assess the situation as that severe at this point. Mexico certainly has serious security problems, but tourists and expats who practice good situational awareness and employ common sense security measures can avoid most of them. The chances of encountering trouble increase greatly after dark. As in the United States and other countries, certain sections of cities are more prone to crime than others and should be avoided, especially after dark. Many of the people who wind up being victimized by criminals (or the police) in Mexico have either been drinking irresponsibly, using drugs, or have visited shady clubs or bars where drugs are sold – and which criminals or cartel figures frequent. Unfortunately, many tourists and expats have this strange expectation that they can get drunk and stupid in Mexico without a problem, when in reality, they should exercise the same caution they would if they were in Chicago, Baltimore or any other large city in the world.

In security, an ounce of prevention is truly worth a pound of cure, and by taking some simple preventative measures, a vacation or business trip to Mexico can be fun and safe.

This entry was posted by admin on August 31, 2017 at 8:58 pm, and is filed under EVIDENCE. Follow any responses to this post through RSS 2.0. Both comments and pings are currently closed.