« CHAKA FATTAH JR (aka: Chip) CONVICTED OF 22 OUT OF 23 FRAUD CHARGES BY USA DOJ
OCGs HAVE TURNED ILLEGAL CIGARETTES INTO A BILLION DOLLAR MONEY LAUNDERING BUSINESS » 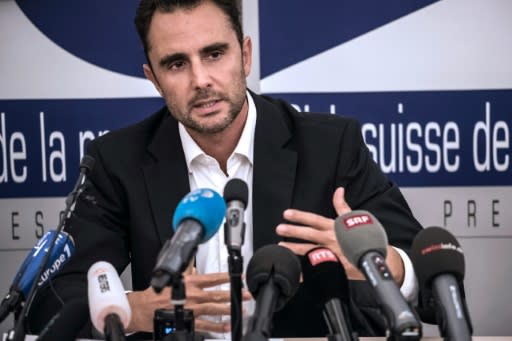 Carlo Bulletti urged a court in the southern Swiss town of Bellinzona to find Falciani guilty of industrial espionage, data theft and violating Switzerland’s long-cherished banking secrecy laws, and lock him up for six years, the ATS news agency reported.

Bulletti insisted that Falciani, a 43-year-old French-Italian national who exposed the so-called Swissleaks scandal, was not a whistleblower as he has portrayed himself to be.

“All claims of being a white knight are simply a web of lies,” the prosecutor said during his closing arguments.

After the prosecutor, HSBC’s lawyer addressed the court, followed by the defence, before the proceedings concluded.

The court is expected to hand down its verdict on November 27.

Falciani himself was not present Friday, having refused to travel from his home in France to take part in the trial.

He is widely viewed as a whistleblower and his actions have been hailed in countries where the leaked information is helping net tax cheats, but Swiss authorities maintain Falciani was only interested in “cashing in”.

Bulletti on Friday listed different phases in Falciani’s alleged criminal activities, starting with the acquisition of the documents in 2006.

Then in 2007, the former IT worker headed abroad to try to sell the information, first through a contact in Saudi Arabia, before approaching Lebanese banks.

Only after his plan to sell the data fell apart did Falciani contact European tax authorities and begin passing them the stolen information, the prosecutor said.

“We don’t know if Herve Falciani was paid for transmitting this data to foreign state services, but that is not important” for determining his guilt, he said.

Bulletti insisted this was a clearly proven case of industrial espionage, pointing to the duration of Falciani’s criminal activity and the value of the secrets he passed on, with his actions provoking a diplomatic crisis for Switzerland.

Falciani has denied he was only seeking financial gain, insisting he had wanted to expose how banks support tax evasion and money laundering.

He has accused HSBC of pressuring Swiss authorities to push ahead with the case.

But the bank’s lawyer insisted Friday that its former employee had committed “the world’s biggest bank pillaging.”

“The collateral damage is incalculable for the clients, the bank, the image of Switzerland’s and Geneva’s financial sector,” the HSBC lawyer said, insisting “a large majority” of clients impacted by the data leak were honest.

Falciani’s defence lawyer Marc Henzelin urged the court to hand down a suspended sentence, slamming the flaws in HSBC’s security system that had allowed his client to gather such a large amount of data.

Henzelin also pointed to the irony of the fact that Falciani was on trial at a time when Switzerland is in the process of dismantling its banking secrecy practices which for decades allowed foreign clients to hide billions from the taxman back home.

“It is not Falciani who is being judged. It is the court. It is Switzerland,” he said.

This entry was posted by admin on November 7, 2015 at 7:28 am, and is filed under EVIDENCE, HERVE FALCIANI. Follow any responses to this post through RSS 2.0. Both comments and pings are currently closed.