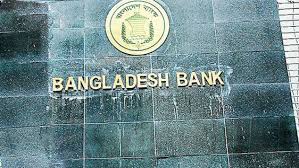 Various names have been tagged in the biggest money laundering scandal to ever hit the Philippines. Rappler traces their connection with each other.

MANILA, Philippines – Many things have been said, rebutted, and confirmed as the Senate tries to get to the bottom of one of the biggest money laundering scandals to hit the Philippine banking industry in recent history.

About $101 million (P4.7 billion)* was stolen from the account of the Bangladesh Central Bank with the Federal Reserve Bank of New York by hackers. At least $81 million (P3.8 billion) was wired to the Philippines. (TIMELINE: Tracing the $81-million stolen fund from Bangladesh Bank)

The entire process which the stolen money went through in the country involves several people mainly from 3 camps: Rizal Commercial Banking Corporation (RCBC), PhilRem Service Corporation, and the circle of casino junket operators.

Rappler traces the network and interconnections of people and personalities involved in the Senate investigation: 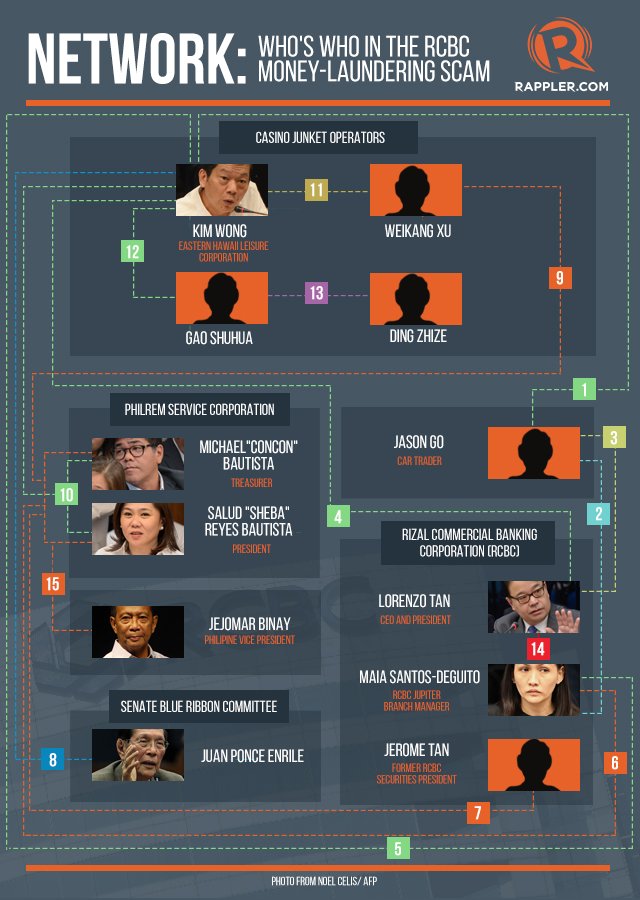 Maia Santos-Deguito – the branch manager of RCBC in Jupiter, Makati – is one of the key persons behind the stolen money that reached the Philippines. Under her supervision, according to a complaint filed by the Anti-Money Laundering Council(AMLC), 4 people with no track records were able to open accounts in RCBC-Jupiter in 2015. The accounts remained dormant until February 2016.

These accounts turned out to be fictitious and were used to transfer the stolen money from Bangladesh Bank. The money was later consolidated and deposited under the name of Filipino-Chinese businessman William So Go who denied any involvement in the scheme. Instead, Go claimed that Santos offered him P10 million ($217,815)* in exchange for his silence and participation. An RCBC investigation later showed Go’s signatures in these accounts were forged.

Customer service head Romualdo Agarrado, in a March 17 Senate hearing, said that Deguito was aware of the request for recall of funds but defied it, telling him that she would rather do it than get killed.

How did Deguito end up in RCBC? According to her, she was “invited” by the bank’s president, Lorenzo Tan in 2013 – a claim he vehemently denied. This is said to be common knowledge, however, among RCBC employees.

A “valued customer” of RCBC, car trader Jason Go, was identified by the RCBC bank head to have suggested that Deguito be assigned to the Jupiter branch in Makati.

PhilRem was RCBC’s choice money remittance company to convert the stolen $81 million from Bangladesh Central Bank to pesos. The money was sent in tranches to casino junket operators and other Philippine casinos. PhilRem and RCBC said they were not aware the money was stolen.

According to Salud Reyes-Bautista, PhilRem president, the company earned about P10 million ($217,815) from these transactions. In a Senate hearing on March 17, she said they would give it back “not just as a sign of apology, but as symbol of a Filipino company willing to find justice.” Their offer was rejected by the Bangladesh Central Bank.

Based on Securities and Exchange Commission (SEC) papers, the incorporators of PhilRem, aside from Salud, are Michael S. Bautista, Francisco Alido Jr, Romeo Monton, and Norlito Palmares. Bautista, Reyes, and Palmares are also listed as officials/directors of the company.

The PhilRem president claimed that the company has been transacting with RCBC for “3 to 5 years” already – translating to a business relationship that began between 2011 and 2013.

It may, however, be more personal for the Bautistas. PhilRem’s treasurer and Salud’s husband, Michael S. Bautista, is said to be a close friend of Jerome Tan who served as president of RCBC Securities (RSEC) until his death in 2012 at the age of 47. Bautista was with Tan when the incident happened in Subic, Zambales.

Prior to his untimely death, Tan was forced to go on leave after an investment scam resulted in the loss of clients’ money under his term as president. (READ: RCBC money-laundering scam mirrors sins of the past)

The Bautistas are also connected to a top government official. Michael is a son of Noel Bautista of NJ Bautista Construction Inc, one of the alleged favored contractors of Vice President Jejomar Binay when he was still Makati City mayor. (READ: The Lord of Makati: Can Binay explain his wealth?)

In fact, the old address of PhilRem is almost the same as the address of the construction firm, as stated in their respective SEC papers:

In an Inquirer story based supposedly on a report of the Anti-Money Laundering Council (AMLC), PhilRem allegedly facilitated numerous remittances amounting to more than P100 million (P4.6 billion)* to Hong Kong by a company tagged as an investor in an identified Binay dummy company.

Kam Sin Wong (more popularly known as Kim Wong), president and general manager of Eastern Hawaii Leisure Company, admitted he has known Michael Bautista of PhilRem “for quite a while” already.

He said in a March 29 hearing that PhilRem transferred P1 billion ($21.78 million) of the laundered funds to his company’s bank accounts and that he visited the Bautista residence 3 times for one transaction that had 3 tranches. (READ: PhilRem, Kim Wong differ on missing $17-M Bangladesh Bank funds)

Wong also said that it was Deguito whom he met through car trader Go. It was Deguito who prodded him to refer clients to her. He claimed that on February 5, 2016, Deguito called him to say that a huge amount of money had arrived at RCBC.

The Chinese businessman’s casino is located inside the Cagayan Special Economic Zone, which was created through Republic Act 7922 by Senator Juan Ponce Enrile in 1995.

During the March 29 Senate hearing, Kim Wong identified two Chinese businessmen as the ones who faciliated the entry of the stolen money to casinos in the country: Ding Zhize from Macau and Gao Shuhua from Beijing.

He said that Gao owed him P450 million ($9.8 million). He referred Gao to Deguito when he (Gao) sought help in opening a dollar account in the Philippines for investment purposes. Ding, on the other hand, was a friend of Gao, who promised that he would bring more foreign casino players in the country.

Salud Bautista, meanwhile, on March 15 said that Deguito also instructed her to personally deliver P600 million ($13.07 million) and $18 million ($826.39 million) in cash to Weikang Xu in Solaire Resort and Casino.

Three hearings in and with so many individuals tagged already, the cyber heist continues to rock the banking industry, unmasking weaknesses in corporate governance and government regulation. The Senate resumes its hearing on the case on Tuesday, April 5.

This entry was posted by admin on March 31, 2016 at 2:58 pm, and is filed under EVIDENCE. Follow any responses to this post through RSS 2.0. Both comments and pings are currently closed.