ABOVE + BELOW – Halil Falyali Sedat Peker accused the Turkish interior minister Süleyman Soylu (above) of links to a network trafficking cocaine from Venezuela to Turkey.

Peker assures that to this end, the Turkish shipowner Erkan Yildirim, son of the former Turkish Prime Minister Binali Yildirim, traveled to Caracas in January and February to coordinate the operations of the new narco route. 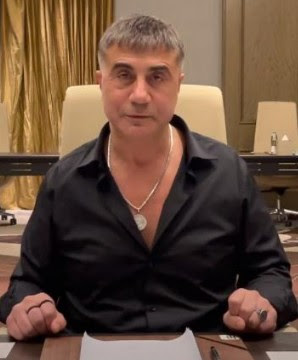 According to Sedat Peker (above), the ships loaded with drugs, coming from Colombia, would leave the port of Caracas (La Guaira) Venezuela, passing through the territorial waters of the Dominican Republic, where they would enter with the illegal cargo, and then continue to Turkey.

Cocaine shipped to Turkey would be unloaded in coastal areas, using 30- or 35-meter-long yachts based in the well-known Bodrum marina on the Aegean coast, and from there it would be distributed mainly to countries in the Middle East. , where the drug fetches higher prices than in Europe.

Another port of discharge is Latakía in Syria, and the money is laundered through a network of casinos in the Turkish Republic of Northern Cyprus, a country not recognized by any state in the world except Turkey, says Peker.

The money would be laundered through an alleged criminal named Halil Falyali, a man close to Erkan Yildirim’s circle.

Falyali is a man who owned nothing 20 years ago, but now owns all of Cyprus (North). He has twenty criminal charges in Turkey and the DEA (Drug Enforcement Administration of the United States) is also looking for him, but they can’t get him (off the island), “says Peker.

Peker warned that anti-drug raids would begin soon in the Caribbean, referring to earlier arrests in Colombia for cocaine shipments bound for Turkish ports.

The issue now is to determine who were the high-ranking officials of the Maduro regime who met with Yilmirim. This would clear up the entire narco-criminal network and it could be determined who the heads of the Turkish-Venezuelan narco plan are.

This entry was posted by admin on May 23, 2021 at 9:00 pm, and is filed under EVIDENCE, VENEZUELA - A NARCO STATE. Follow any responses to this post through RSS 2.0. Both comments and pings are currently closed.