WILL OLLY DONDOKAMBEY BE NEXT? FORMER SPEAKER OF INDONESIA PARLIAMENT SENTENCED TO 15 YEARS IN PRISON for his role in defrauding the government of US$170M through a national electronic identity card project

ABOVE (before) + BELOW (now) – Setya Novanto 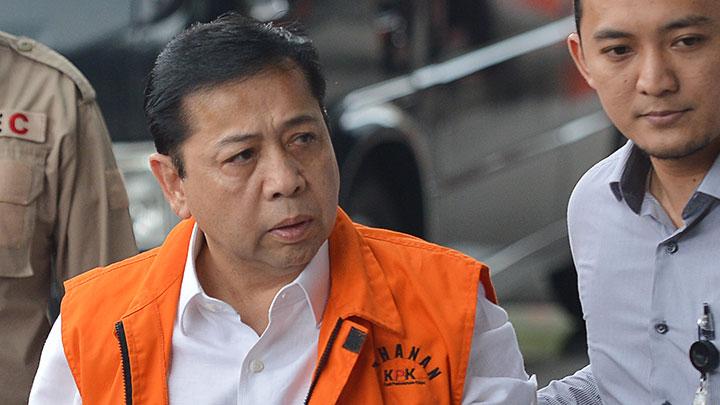 An Indonesian official was sentenced to fifteen years in prison for his role in defrauding the government of US$170 million through a national electronic identity card project, Reuters reported Tuesday.

The former speaker of parliament Setya Novanto was convicted of conspiracy to commit corruption, sentenced to fifteen years in prison, and fined the equivalent of $36,000.

This is the fifth corruption scandal Novanto has been implicated in since the 1990’s, but the first that has resulted in a conviction.

Novanto was arrested in November 2017 after the Corruption Eradication Commission (KPK) found that he orchestrated a scheme to steal over a third of the US$440 million in state funds gained from increasing the cost of cards for the national electronic identity system.

The KPK has been applauded as one of the most effective anti-corruption agencies in Southeast Asia despite efforts to discredit the organization. The Commission’s investigations have led to the detention of ministers, governors, judges, other high-ranking officials, and members of parliament.

“This is a warning to anybody not to act against the law,” Vice President Jusuf Kalla told Metro TV regarding the verdict.

The ruling comes as a welcome surprise in a country where the constituency ranks the parliament as one of the most corrupt government institutions, according to report from Transparency International.

WHEN WILL OLLY DONDOKAMBEY BE ARRESTED FOR CORRUPTION + MONEY LAUNDERING IN 2015 OF OFF-LEDGER FUNDS FROM HSBC? This entry was posted by admin on April 26, 2018 at 8:57 am, and is filed under EVIDENCE, INDONESIA: 3 GOVERNMENT BANKS + STOLEN ID = MONEY LAUNDERING. Follow any responses to this post through RSS 2.0. Both comments and pings are currently closed.